posted on Jun, 29 2013 @ 03:28 PM
link
Wayne Madsen a former US Navy lieutenant who worked for the NSA for over 12 years has revealed that Denmark, the Netherlands, France, Germany, Spain and Italy were having secret deals with the US.


At least six European Union countries in addition to Britain have been colluding with the US over the mass harvesting of personal communications data, according to a former contractor to America's National Security Agency, who said the public should not be "kept in the dark".
Wayne Madsen, a former US navy lieutenant who first worked for the NSA in 1985 and over the next 12 years held several sensitive positions within the agency, names Denmark, the Netherlands, France, Germany, Spain and Italy as having secret deals with the US.

Madsen said the countries had "formal second and third party status" under signal intelligence (Sigint) agreements that compels them to hand over data, including mobile phone and internet information to the NSA if requested.

Madsen said he had decided to speak out after becoming concerned about the "half story" told by EU politicians regarding the extent of the NSA's activities in Europe.

Basically they are all as bad as each other, as if we didnt know

Read the full article from 'The Guardian' here

sorry if this has been posted already it didnt show up when I searched :-)

I guess there really was something to this... also guess this might have been the kind of information covered in the MOD-D the Guardian received....


Indeed ganjoa, it looks to have been taken down at 00:04 this morning, I tried to view at 00:11 and the removal notice was there.

The article mentioned Angela Merkle the chancellor of Germany, Madsen said she was a hypocrite for questioning America over the NSA when Germany were up to the same all along and had full knowledge of what the NSA was up to.

posted on Jun, 29 2013 @ 07:50 PM
link
I managed to find a couple of screenshots of the first few paragraphs of the article before it was pulled down - 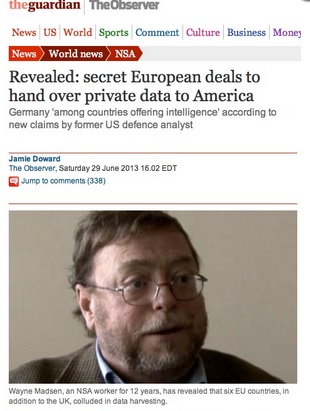 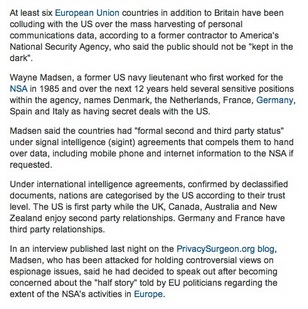 And here is a link to the 'privacy surgeon' website where you can read everything Wayne Madsen had to say on the topic.

posted on Jun, 30 2013 @ 01:53 PM
link
Talk about damage control. They actually changed the article (dated today) and the cached version is gone to on the guardian website.