This light kept moving behind the tree branches with every angle i stood at. And the sound that you hear on the video wasn't heard while recording it. That's two ufo videos ive gotten that have sounds on them. I just found it wierd i guess.

Then we can work out what it might be.

My first impression is that it is a plane heading towards you.

The sound is definitely your camera's autofocus mechanism.


Was it orange ?
Could it have been one of these ? 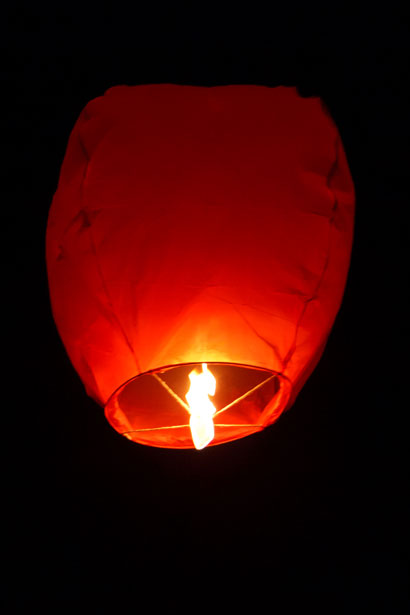 I think this video from your channel may answer the question .


I believe they are lanterns and the object in the OP video is probably a lantern too .

The orange UFO I've seen a few times Mostly at NAS Lemoore. Don't know what they were.

The sound (to me) was a train horn.

The orange UFO I've seen a few times Mostly at NAS Lemoore. Don't know what they were.


No, the sound he mentioned was the autofocus, as he admits on the text on the video.
edit on 25/6/2013 by PheonixReborn because: (no reason given)

It's just a plane IMO, moving towards the right of your screen. You're filming it through a small opening in the tree leaves and as it moves to the right, you're moving to the left keeping it in view... it's not "seeing itself through your vision" as implied in your video description.

Also, I don't think it was "telling you to stop via a sound captured on camera" since at the time you filmed this you couldn't of heard anything since you said the sound was only audible from the recording and not in real life.
edit on 25-6-2013 by Dominar because: (no reason given)

Were you near what city or state, country.

Was a train track near by ? still sounded like a train to me.

airports near by? landing lights?


i live near train tracks yes
theres an airport clear on the other side (east) of the city
the thing is is that the light was seen between the same tree branches for 5 minutes or longer, i lost interest when i couldn't see it anymore. But I don't recall hearing the train horns, and how coincidental are these train horns im hearing all the time, its like im being stalked by trains now.

Just keep checking it out and report back.

Trains sound as they go through X-ings could be far away.

Apart from that, I only see earthly things..

and how coincidental are these train horns im hearing all the time, its like im being stalked by trains now.

That's very possible, I guess, however don't disregard this clue


i live near train tracks yes

posted on Jun, 25 2013 @ 09:02 PM
link
An aircraft coming directly towards you, slowly descending, could easily be visible for five minutes - or more - without appearing to move.

posted on Jun, 25 2013 @ 09:08 PM
link
Aircraft heading towards you or chinese lanterns. The way it was dimming in and out is either indicative of the flame from a lantern or, your shoddy camera work. I was camping last month and our "neighbor" camping to the east of us kept releasing them and its one of the things I noticed (I hear they're expensive too. These were large!)....how much the flame flickers in the wind and at higher elevations, gives the illusion that its a blinking light. We heard some idiot yell "UFO!!" from somewhere to the west of us.