It has been a while since I posted here, but I saw something in the Google Doodle today that was celebrating Antoni Gaudi's (Architect responsible for the Sagrada Familia in Barcelona, among others) which I thought referred to 9/11 and Osama Bin Laden. I asked people at work and they couldn't see the connection, so I searched here to see if it was just me and it doesn't look like anyone else has posted so I will let you decide if I am seeing things or not!

Here is the picture:

Is it just me or does the second 'G' show Osama's face with a passenger plane to the upper left of it? What has that got to do with Gaudi? The other letters don't have any meaning to me, if anything they just make this letter stand out. Anyone's thoughts on this?

PS: Loving how easy it is to add photos to ATS now, how long has feature been here!?


wtf.... I knew when I was on google today something looked friggin weird.... Thank you for pointing that out... and Yes! Yes it does...


Thank god I am not the only one who saw it! Yeah it just looked weird straight off to me, but took me a few seconds to notice it. Now it sticks out like a sore thumb!

I don't understand the reference though? Why would they relate it to Gaudi?

posted on Jun, 25 2013 @ 04:04 PM
link
you are very correct in your observation, I see it as well. Im not sure what it would have to do with the architect, but if you wanted to stretch it, could be a hint by google (who we know sells out to the gov) that something will happen in Italy soon

posted on Jun, 25 2013 @ 04:10 PM
link
Apparently somebody matched the sites with the weird google art but the g?? Well, still looks freaking weird and looks more like a man than a building. I honestly thought it was a dude and not a bit of architecture as well.


Sorry to be a 'know it all' type, but I am guessing you mean Spain?

Apparently he was given the nick-name 'God's Architect'. Possible Freemason theme there but that's at a big stretch. I just don't et it.


Thanks for that; good find! I have included the picture from the link: 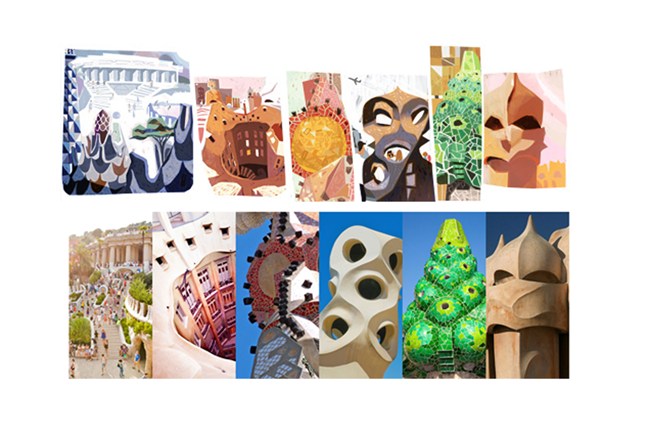 I think the others look familiar, but that one does look completely different to me! And the plane added to the top; that just doesn't tie in at all!


What if they were gonna take down a national monument? God's Architect right? A building of importance? Maybe a stretch but weird symbology in it...


Niiice~ Pretty archetecture as well... Though it still leaves a question to why that G looks like Osama Bin Laden with a plane in the corner....

posted on Jun, 25 2013 @ 04:24 PM
link
It seems to me they are implying far more then it initially appears, after all you have to look at ALL the symbolism and the big picture...not just one.

In which it looks to me like the first picture shows potentially a building in dc in the winter and the O shows a building potentially being swallowed by something(i can't tell) and the second O is a sun(which they love sun symbolism), then the g that was mentioned shows what looks like an Arab in a jet or similar, and the next picture appears to reference a Christmas tree...finally the last picture looks like it is referencing like an alien or a statue or something similar.

Also if you add in the potential tsunami reference by google a few days ago then yes it seems they are warning us.

Though i have to say from the looks of it to me, it looks like they are saying a big terror attack will occur around Christmas...which if so is no surprise.


Well I thought that 'O' you just referred to could have been Building 7 when I first made the 911 connection, but I wasn't so sure so I kept it to myself? What do you reckon?

I know what you mean my taking it all together, Kind of reminds me of the old Wingdings thing where you typed something specific and it showed a plane flying into two towers with a skull and cross bones? Still creeps me out that one.


Its tough to say, it does look like it could very well be building 7...but if so you have to try and figure out what they are trying to tell us.

You have to also take into account Antoni Gaudi...something that would connect something relating him/or related to him in some way...would be connected with the other pictures. Like an upcoming event possibly.

I think it is actually a modified version of this sculpture of Antoni Gaudi with the beard stretched to make a G.

I found this image by clicking on the Google Doodle, then selecting more images and scrolling through the lot. All of the other letters have their grounds in artwork from that gallery of images and this is the closest match to the g I could find.


Yeah I know what you are saying. I read that he was once terrified that the Familia would be damaged during an uprising against the catholic church. Though you don't hear much about it; I believe there are still protests and clashes on the streets of Spain over austerity measures. Obviously 911 involved the destruction of symbolic buildings, maybe there is something there?

I am off to bed now but looking forward to hearing what anyone else has to say about this by tomorrow afternoon. If its still on my mind I am going to look into that structure in particular, the one depicted in the 'G' to see if there is anything there. Otherwise I might email Google, see what they say about it!

posted on Jun, 25 2013 @ 04:42 PM
link
Personally i think the connecting element is him being referred to as "Gods Architect" and being Roman Catholic.

In reference to their grand design and potentially the Vatican being involved.

Now another possibility is these images Google shows are just red herrings...but it doesn't appear to be that way, after all very few people will notice these(I'm including the tsunami reference and whatnot from a few days ago too.)

posted on Jun, 25 2013 @ 04:44 PM
link
reply to post by carlitomoore
Not to go off track but....
How did you insert that image? I just used the image link and all it does is insert an external.... do I need to upload the image to the site first or is there a "feature" that takes the Image URL and does the upload and associates it to the page for you?


That isn't the building that the Doodle is based on though; it is more of a 'Totem' like structure (See the second image). Maybe if we look at that we can find something? To me there is no resemblance, whereas the others bear slight resemblance to their counterparts.

I'm not too much into my art; abstract at that but even so it still doesn't sit right with me. Don't get me wrong, I am not screaming Conspiracy or anything, it could simply be a designer somewhere fooling around; or even an inadvertent coincidence. But still, strange/interesting none the less.


I clicked the 'Tools+' button on the toolbar, then selected the 'Member Upload' option that appeared.

You can then select the image and when it has uploaded click on it and it gives you the code to drop it straight into the post. Really straight forward, it used to be a nightmare on here! I can remember doing a post below on Fraud (See my signature if you are interested) and it took me hours of formatting!

Star and Flag to ATS!

The night Gaudi died he was struck by a tram and apparently no-one recognised him and he was left at the site of the tracks for a while.

There is a lot of speculation as to whether it was Osama's body that got dumped so here you have two bodies being discarded, with the identity being questioned.

That is the only Gaudi/Osama link I can see other than the Iconic Building/Twin Tower angle.

It would be interesting to see if any of his buildings were destroyed. Maybe burned to the ground due to the high temperatures that Aviation fuel can apparently burn at!? Sorry that is another story for a different time.