At last wrapping paper for men

This little invention is genius
Its wrapping paper similar to tin foil, all you have to do is place the present in the middle and fold it around,

No scissors, no tape It's brilliant

An idiot-proof type wrapping paper has been designed to help men who struggle to present neatly-covered gifts. The 'Man Wrap' does not require scissors or Sellotape, and nor does it involve the user having to make fiddly folds in the ends. Users simply roll it out, place the gift in the middle of it, tear off a strip and twist it around the present to secure it in place.


And hey presto you get this

You can all thank me later

posted on Jun, 18 2013 @ 11:09 AM
link
I love it, Cody! And, believe me, gift-wrapping disability is not limited to men. I've always been a "throw it in a gift bag and stuff some tissue paper over it" type wrapper. Maybe there is hope for me, now.

Originally posted by graceunderpressure
I love it, Cody! And, believe me, gift-wrapping disability is not limited to men. I've always been a "throw it in a gift bag and stuff some tissue paper over it" type wrapper. Maybe there is hope for me, now.

Mum is that you ?
It is isn't it
Cody

posted on Jun, 18 2013 @ 11:39 AM
link
When first there came light, God made Woman and took delight in His creation. Then He made wrapping paper so they may give each other gifts! Finally, God made Man, realizing someone had to help multiply more Women. Realizing His terrible mistake and contradiction....God then invented the Gift bag as His first present to Man so he may maintain some dignity in front of Women.

Thanks for offering a different idea!

posted on Jun, 18 2013 @ 11:40 AM
link
It would probably still look like crap when I was finished.
My wrapping just never turns out quite right.


Wrabbit my friend
You crack me up. And then there was shop gift wrapping service

Originally posted by butcherguy
It would probably still look like crap when I was finished.
My wrapping just never turns out quite right.

Never give up hope my friend

Originally posted by cody599
Mum is that you ?
It is isn't it
Cody


You couldn't have timed that better


I love wrapping gifts. I use toilet paper and duct tape sometimes.

Originally posted by jude11
So now my brown paper bag with a ribbon around it isn't going to cut it anymore...

You put ribbon on it?

posted on Jun, 18 2013 @ 01:25 PM
link
Well, its a nice invention, but I'm gonna stick with my unbelievably bad wrapping skills because its the only way me and my wife can separate our gifts upon first sight. Plus I get to tell her that our sweet kitty helped me wrap them and get a warm fuzzy awwwwwww from her around the hectic, borderline marriage ending holiday season.

What I would like to know is why this British invention, created by a British guy named Martin Grix, seems to be marketed at 'idiot' Americans.

What's the matter? Aren't there enough 'idiot', thumbless Chavs in Britain that have forgotten how to fold paper and use tape?

I also don't care for the mild desecration of the American flag that is happening in that sequence of photos.

Why didn't Grix's marketing people wrap the 'idiot' in a Union Jack? 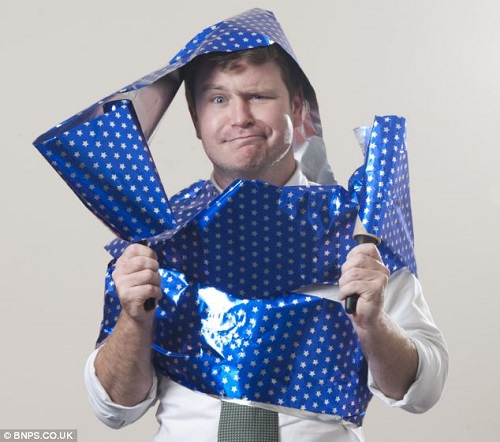 I can't stand that photo.