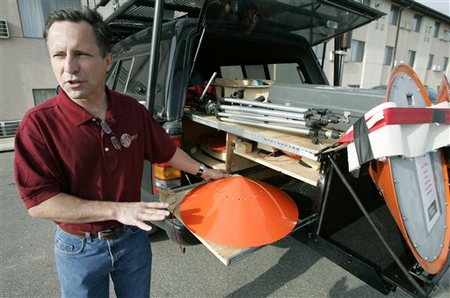 Three veteran storm chasers died doing what they loved: roaming the Great Plains in search of dangerous storms like the one in Oklahoma that ended their final pursuit.

Tim Samaras, his son Paul and colleague Carl Young died Friday night when an EF3 tornado with winds up to 165 mph turned on them near El Reno, Okla. After years of sharing dramatic videos with television viewers and weather researchers, they died chasing a storm that killed 13 in Oklahoma City and its suburbs.

"It's something we've done countless times in the past and have done it successfully and safely," said Tony Laubauch, who was working with Tim Samaras' chase team Friday night. "And, you know, whatever happened on this one, it's just horrible beyond words."

The men's deaths in pursuit of the storm are believed to be the first among scientific researchers while chasing tornadoes, the Storm Prediction Center in Norman, Okla., said.

posted on Jun, 2 2013 @ 11:59 PM
link
Holy smokes! Tim was one of the smartest chasers in the business. What a huge loss for all those that knew him. It sucks when you die doing what you love cause your still dead. RIP you guys were some big dogs ) :

But, they knew what they were getting themselves into.

You chase enough and eventually it catches up to you.

They are not invincible to those storms.
edit on 3-6-2013 by Diabolical because: (no reason given)