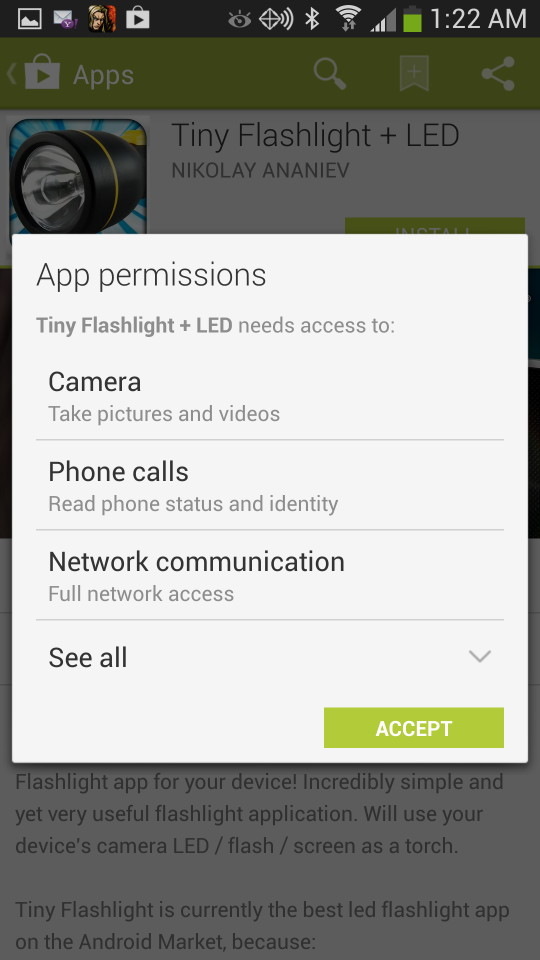 At least Blood Brothers is a MMORPG…


This is a high price to pay for which might be one of the most basic functions in a smartphone:
Leaving the flash on and producing all one color on the LED .

This is just sad. It stirs me more than some of the other things I have exposed myself to over the years. I mean c’mon! It’s a **** Tiny Flashlight + LED App!

Who is this ‘person’ so mislead by their view of the wondrous abilities of the Tiny Flashlight + LED App, whom deducted its permissions based on its subpar functions? Is this arrogance or the will of a incompetent cabal? Or just simple data mining sold off to marketing companies?

Honestly, how in the H E Double Hockey Sticks! do you rationalize this.

I decided to refuse the offer.

^I am putting this in General Conspiracies because it feels like a general issue with a variety of opinion. So many schools of thought out there. The possibilities are endless. -- The "Eye With Time" Icon just makes me want to bang my head against the wall [Top Middle]...

Originally posted by _BoneZ_
reply to post by ConspiracyBuff

Yea no conspiracy, just spam. I was about to mention these very points, as you will find in most apps.

posted on Jun, 1 2013 @ 12:11 PM
link
Hmm do you have any advice on good games for mobile devices? I saw you mentioned Blood Brothers.

posted on Jun, 1 2013 @ 12:21 PM
link
I used to worry about those permissions too, but as posted by _BoneZ_, most apps need these permissions to access certain parts of your smartphone in order to work properly.

There are malware apps though, they could definitely use these permissions to scam you in some way. Here's a good little article I found talking about malware apps and other things...


“Does a ‘flashlight’ application really need access to your GPS location, your contacts, and the Internet?”

posted on Jun, 1 2013 @ 12:27 PM
link
I should get this app. I don't have a phone but at least I could tell people I have an App. People ask me what Apps I use once in a while, I tell them I don't have a cell phone and they look at me as if I am ancient. I had a phone when they were bag phones, longer than most people around here. I needed phones for my business, when I quit the business I ditched the phones. I can't stand texting or E-mail, I don't even like to mail letters the regular way. It's darn weird that I am even doing ATS.


Don't worry you're not alone without a phone. When I was younger I was caught up in having pagers and then cell phones... Always had to have the latest gadget and of course that meant forking tonnes of money to the cell phone providers for phone upgrades, contracts and all that BS.

One day I realized I was getting had, the greasy old men sitting atop those companies had me by the throat, thinking up outrageous news way to funnel my money for their products and services. Well that was about 4 years ago and I haven't looked back.

Now I walk the streets looking at all the zombies walking around staring at their phones, updating their status constantly and being overall totally hypnotized by their device. I look at families having dinner in a restaurant and most of them are on their phones... Sad

I have the internet at home, that's good enough for me!
edit on 1-6-2013 by Dominar because: typo

posted on Jun, 1 2013 @ 01:12 PM
link
It looks like he has every conceivable process running on his phone, and he's worried about the flashlight?

This was from my IT guy at work.

posted on Jun, 1 2013 @ 03:00 PM
link
My neighbor has a five hundred dollar windows phone. Claims it is the best five hundred dollars he ever spent. Tells me it is a computer in his hand. I tell him to do some 3d modeling and animation and then get back to me. He went crazy over this app and came over here drunk one night showing off his five hundred dollar flashlight. Then he did not have enough juice left to watch a movie on his little screen.