Looking for an alleged ghost picture

Having had an interest in the paranormal for some time now, I am always interested in alleged pictures of ghosts.

Now I'm aware that many alleged ghost pictures are either hoaxes or of course simple pareidolia, but I do believe that there are some, what would be considered to be genuine images out there, many of which are quite famous and easy to track down. In fact there have been a number of threads in this forum over the years discussing these very images.

As such I am quite familiar with many of the images considered to be real. However, I came across an image a couple of years ago that seemed to be unexplained and I was fascinated by it, but...silly me, I didn't bookmark it and now have no idea where I saw it and after many fruitless searches have never come across it again.

So I was hoping that ATS readers may know what image I am referring to and hopefully help me find it. Below is what I can remember about the image.

The picture was supposedly taken by a demolition crew after a hotel fire or explosion (not sure which) which had recently occurred, and there was a very clear image of a woman in a red dress making her way across the rubble. According to the demolition crew, it would have been impossible for a person to have walked across it, as it was still very hot and of course dangerous. Apparently members of the crew shouted out to her, but she did not respond, and of course she suddenly disappeared but her image was captured in a photo.

So ATS'rs have any of you come across this picture, if so do you know where I can find it and if you have seen it before, was it debunked, what are your opinions on it etc.

Thanking you in advance.

If it is, I found it after a 15 second google search of "woman ghost in debris".


No, sorry, that's not it, I think that's an image from the WTC and I don't think the woman was dead at that point.

Thanks for trying though.

Destination Now --My googling around found nothing. Do you have any other information about the picture you are looking for? Do you know where it was taken - what country or city? What time period was this - recent? Or are we looking for an old black and white photo?

The story sounds very intriguing, but I've never heard it before. I hope we can find this picture.
edit on 27-5-2013 by VegHead because: (no reason given)

The Lady in Red was a prostitute who was strangled on the sixth floor of the Mizpah Hotel by a jealous boyfriend. The Lady in Red is said to follow guests around and reportedly will play with the gaming equipment. Her apparition was observed by paranormal investigators one night gliding through a hallway at the Mizpah. Her ghostly appearance was described by them as being “shimmering and greenish blue”, rather than red, however.

Haven't found yet any related photo though.

It was the subject of an episode of the Ghost Adventure, S05 E02:

I think the pic is fairly recent, probably in the last five years (maybe at bit more, but I doubt more than ten) It was a colour photo, but I'm not sure of the location or exact date.

Apparently a hotel had gone on fire or there was an explosion and the picture had been taken by the demolition crew who came to assess the damage a few hours after the event (obviously after the fire service etc and the evacuation of guests, staff etc)

I seem to remember the hotel explosion/fire or whatever was an accident rather than at terror attack or whatever, but cannot remember any other details.

It's so annoying, I can picture the image in my head as clear as anything..why oh why did I not bookmark it..must have been having one of those days lol


Thanks for that, I've seen that before in my google trawling for this image, it's a cool story.

The pic I remember however, showed the women in a red dress making her way across the rubble of a destroyed building, in daylight. She looks like a regular person, only the crew claimed there was no way a person could have walked across the area due to the heat and danger from other debris as the hotel had just recently been destroyed.


Here is the picture I was talking about, it was taken in 1989 In Germany outside of Colburg, in the small town that is translated into HELL Town. This is were they worshiped the devil, also the town had hotsprings at one time, I found it erie that this is the only picture that had this one it, yes it was taken from the bus but so were many others.

What do you see and think it is


Is the anomaly to the left hand side of the picture?


Yes it is to the left side of the picture


Well I see a red object with what looks like a face above it..is that what you see?


Correct, give you a little more information we were driving from left to right in this picture, the interior of the bus was blue.


Well according to my daughter who is a graphic design student, if the interior of the bus was blue then the colour wheel dictates that reddish tones would become more brown or purple, so yes, it certainly seems like you have some sort of anomaly in your pic.

What are your thoughts on it?


When I seen this picture 24 years ago after the film was developed 35MM 400 ASA, (only film I bought) I found it to be weird since I was traveling with a chaplin ( Priest) and we drove by this site on our way to a Concentration camp and the Colburg Castel. Personally I see what apears to be the Devil looking at us, with the horns going up. With the history of the town it was weird to say they worshipped the Devil in the town of Holle Germany and I get a photo of this.


I suppose it could be, you certainly have something strange in that picture.


This isn't the photo you are looking for, but it is a real ghost picture. I thought you might like to see it.

This is the spirit of my cousin's deceased husband. He is standing beside a tree he planted at Christmas time in their back yard when they were first married.
His daughter took a picture of the snow one evening, and when she downloaded it, her dad was standing there...
Oh... and it was a few days before Christmas when she took the picture.
I think he wanted to say hello, and let them know he was still with them.

The picture was taken with an old cell phone camera, so the quality is a bit fuzzy, and also, the snow falling made it look even more fuzzy... 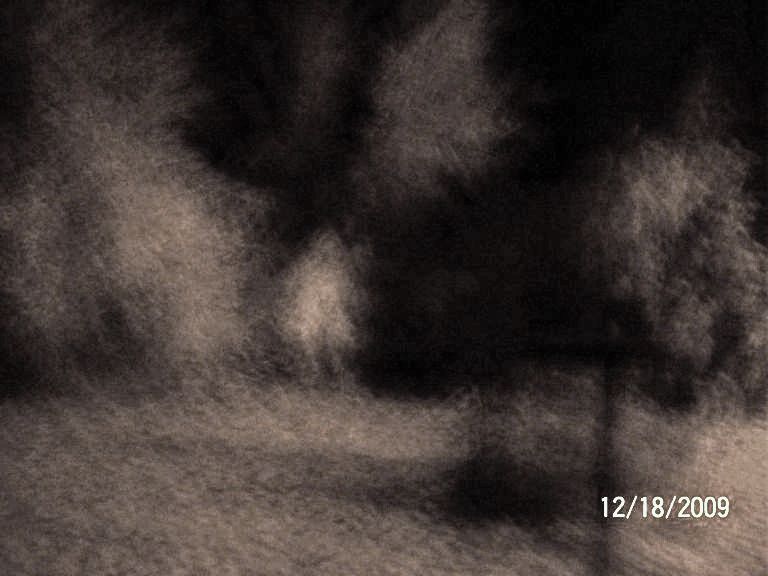 
Awesome pic Sled, you can clearly see the shape of a person in the background. Obviously there will be those who say it could be anything, but like the other pic that was posted here, there is definitely an anomaly there.

Just wish I could remember more about where I saw the pic I refer to in my OP..Nevermind, if it means we get other interesting pics on here it will be worth it


To me it looks like the redness is just a reflection from something / someone sitting inside the bus.

You can see the shadows of the other passengers, and to me the red one is probably just someone sitting close to the window, casting their reflection onto the glass.


I think I see what you're referring to, but is there any way you can circle the part of the photograph showing the ghost?

You can see he has a head, torso, arms, and legs. The flaring in the middle is just energy emitting outward, I think.
Someone said it looked like he had on a dress.

I hope that helps you see him. That's the best I can do.