Went searching for earthquakes and found this instead???

posted on May, 23 2013 @ 05:50 PM
link
So I noticed earthquakes deep in Tonga and went to look up some information about the area. Got a look at the coat of arms and the symbolism was startling. There is a star of david, a cross, a dove, 13 leaves on each branch, and something that resembles the knights templar.

I thought this was very strange to have in a country so far removed from the rest of the world.

en.wikipedia.org...
Wikipedia had this to say...

The royal family and the nobles dominate and largely own the monetary sector of the economy – particularly the telecommunications and satellite services. Tonga was named the sixth most corrupt country in the world by Forbes magazine in 2008.

Their motto at the bottom... 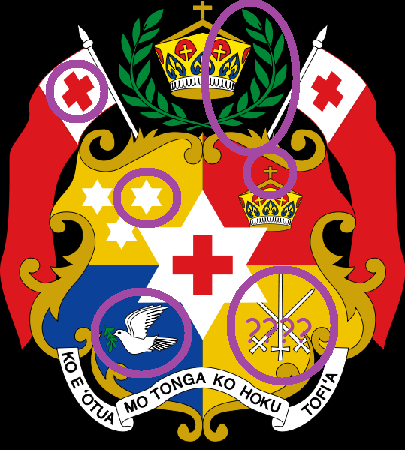 I was wondering what the 3 swords symbol is for? Perhaps someone can shed some "light" on this.

I think there is some Illuminati references here?


I found this in a simple google search.www.hubert-herald.nl...


Arms: ¼: Or, three six-pointed stars Argent; 2. Gules, the crown of Tonga proper; 3. Azure, a dove with a sprig of olive in his beak, proper; 4. Or, three swords per pale and per cross saltire proper. In nombril point a six-pointed star Argent, a cross Gules. Supporters: Two national flags in saltire being Gules, a canton Argent, a cross Gules. Crown: The Royal Crown of Tonga within a wreath of laurel proper. Motto: KOE’O TUA MO TONGA KOHOKU TOFI’A. (God and Tonga are my Heritage).

the swords in the last quarter symbolise the three Royal dynasties

posted on May, 23 2013 @ 06:15 PM
link
If a symbol is adopted or utilized by a group it does not mean that it becomes universally recognized as symbolic of that group. The swastika predates the Nazis. If you paint a swastika on the wall of a synagogue it will be interpreted as a Nazi symbol, but if you paint it on a kid's head during a religious ceremony it can hold a completely different symbolic meaning.

The meaning of a symbol is defined by its context and, to a large extent, the preconceptions of the person who is viewing and deriving meaning from the symbol.
edit on 5/23/2013 by Slugworth because: (no reason given)

posted on May, 23 2013 @ 07:28 PM
link
Interesting, I have hears that the Tongans were the warriors of the Pacific, they were the most aggressive and militant.
edit on 23/5/13 by Cinrad because: (no reason given)

posted on May, 25 2013 @ 12:51 PM
link
That all changed in 1875 when the first constitutional monarchy was formed in what is now Tonga and the royal crest was created. It took on the form it has because the monarchy was formed with the help of British missionaries who had been living on the islands since 1797.

So the Royal Crest, created and adopted by King George Tupou I, has it's roots in British heraldry.

King George Tupou I was originally named Tupou Maeakafaua Ngininginiofolanga. However, he was baptized by Catholic missionaries in 1831 and changed his name to George Tupou after King George III of Britain.