Flood/Tornado/Earthquake proof home? Is it possible?

posted on May, 23 2013 @ 09:48 AM
link
I understand that you really can’t completely protect yourself from these things. But I had an idea last night and would like to hear your thoughts. Google returned oodles of hits, but none that satisfied me.

I have an opportunity to buy property that may be affected by all these things. It’s by the Mississippi river, in tornado alley and near the New Madrid fault line. It’s also out in the country.

The house would not be large, maybe 1000-1200 square feet, built out of poured reinforced concrete in a dome fashion. Are there other materials that are strong, yet flexible?

The outer perimeter of the property (1 acre?) would initially be scooped out and fashioned much as an in-ground pool would be with 2-3 feet of concrete in a bowl type configuration. The bowl would then be filled with dirt.

The outer perimeter could then be built up to a certain height, with an entrance gate. Similar to a land dam. The house goes in the middle obviously.

I know….that’s going to cost a butt load of money!

Does anyone think that this would be feasible?

If anything, it would make for a great base camp in the event of a zombie apocalypse.

posted on May, 23 2013 @ 09:58 AM
link
You'd need to check back and find all the worst cases of each event that have happened in your area and then plan for that and a bit more but i'd say its probably going to head into silly money territory when you try and get the design sorted, you could probably find some sort of university student doing a PHD who might like the project as part of their thesis thus saving you loads of money as they'll have to do the calculations and work out the exact way to survive an f5 with a 9.0 earthquake at the same time followed by about 2 feet of water in the next 3 hours etc

I'm thinking that if all three things happened at once, I'd be screwed regardless.

Geodesic domes offer the safest shelter in the most violent weather extremes around the world. In tornadoes and hurricanes, high winds and negative air pressure combine and get under the eves and soffits of conventional housing, then rip the roof off, leaving the occupants exposed. A geodesic dome's aerodynamic shape offers the best above ground protection against winds from any direction, allowing gale force winds to slip past. During an earthquake, a conventional house rocks off its foundation and topples as the earth makes lateral shifts. A dome has an even distribution of weight and a low center of gravity so it moves with the earth. Engineering for incredible snow loads is intrinsic in its design.

Plenty more images on the below link.
OTHER_LINK4

posted on May, 23 2013 @ 10:24 AM
link
Buy yourself one of these fine properties! They're a little short on creature comforts..but then, not all can be described that way. They were build to survive anything though. How many people can say their house can take a near direct hit by a nuclear warhead and still exist as a place to cook dinner that night?

Originally posted by Wrabbit2000
How many people can say their house can take a near direct hit by a nuclear warhead and still exist as a place to cook dinner that night?

Just crack the door a bit and stick the hot dog out?

Who needs a microwave?

Originally posted by rickymouse
Bowl on bottom, dome on top. Better install a chain and anchor so it doesn't roll away when it pops out of the ground.

That made me chuckle. I can see my sister now as she looks out the window sipping her wine as my house rolls by.


It is difficult to understand if one does not live in such high risk areas. Myself living in South Africa can't fathom why homes are not being build with reinforced concrete with safe rooms inside. In OK after 1999 the US government handed out a grant and only 10,000 homes got safe rooms. The owners had to pay 25% and the government will pay the 75% as i understand. But, funds "ran dry".

Yet, the US government still had enough money to go to war in 2001, which is okay seeing they were under attack. But, after 12 years they are still busy in the Middle East.

Look after your people, cause nature, though awesome, is brutal.

Guam is a great example in the early 60's, after being struck by a severe hurricane, they built homes with reinforced concrete. 50 years later after many severe typhoon hits, those homes are still standing.

In 1962, Typhoon Karen roared across the island of Guam with recorded wind gusts up to 207 mph, cleaning the island of most of the conventionally constructed houses. Following an appeal to the U. S. government by the Guam governor, President John F. Kennedy directed the development of typhoon-resistant houses.

Now i know that an EF4/5 will obliterate anything in its path, but, won't one have a much greater chance for survival in a house built with reinforced concrete & safe rooms?

When i look at this week's tornado, i think to myself: If i lived in tornado alley and was hit in 1999, or the 2011 Joplin one i would do all i can to build a strong home. One can rebuild a home, but, one cannot get your family back.

The people of Oklahoma have such an amazing fighting spirit, and they should. But, i cannot agree with people saying "we just gonna rebuild" and again the homes they rebuild are weak. The schools, no matter if they were there before 1999, should all be the same standard as those built after 1999. Crap excuse on the law that schools that were built before 1999 needn't have storm shelters! I can't remember the man's name they interviewed on tv who said that, but i turned red with anger for the first time in months while listening to that interview.

I am not American, but i am angry with what happened, and the lives that were lost. Sad and furious.

IMO the US government should bloody look after their people. Give those who live in high risk areas strong strong STRONG homes. Even if the risk of the house being severely damaged in an EF3/4/5, the chance for survival will be much greater, especially with safe rooms in side, or bunkers outside.

True. However there are no limits to natural calamities While you're at it, what if the earth is hit by a huge asteroid? There are no limits or boundaries to the kind of protection we seek. The goal is to minimize the damage from the known calamities for now.......until

posted on May, 23 2013 @ 11:15 AM
link
reply to post by KaelemJames
I agree and basically the housing codes and engineering designs need to change in the tornado alleys of US.

posted on May, 23 2013 @ 11:19 AM
link
If building from scratch, I'd recommend making an underground residence. Like another mentioned, using shipping containers could save a bundle in such construction, cheaper than all that concrete anyhow. Plus, it would drastically reduce your construction time, which is really your biggest cost factor (labor). If an earthquake is actually likely in the area, you could even build it on the kinds of spring supports used by large buildings.

Plus, the best advantage of all, from the surface, it'd be pretty easy to hide you are even there. You could easily hide entrances/exits, and vents.

Since going from nothing, might as well integrate solar and geothermal power, etc., but realistically, you are really going to have to look at the costs of different ideas to see what is in your budget for this (with an eye that the more unconventional you go, the more difficult it will be to permit, estimate costs, etc.).


I agree and basically the housing codes and engineering designs need to change in the tornado alleys of US.

Basically, if you are in the teeny tiny red areas of tornado activity, a concrete, subterranean storm shelter should be a MANDATORY feature of your home. Survivability in one of these is nearly 100% even if an F5 tornado. Doesn't have to be big, just large enough to sit all of you with some small amount of supplies while it passes. 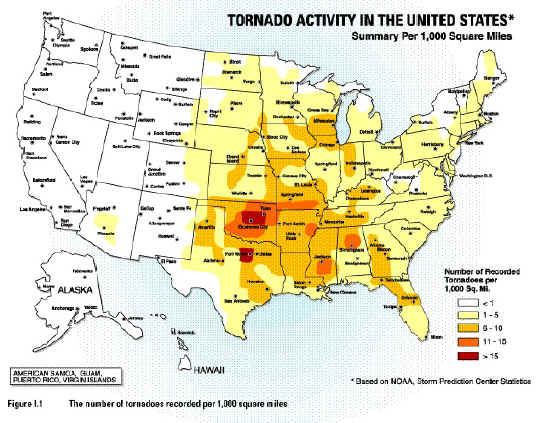 
As much as most home builders would like to strong proof their homes, there are many obstacles. Often it is a neighborhood association, or state/county/city regulations. (They get worse the lower you go). Can't have that unsightly bunker in the middle of the block now, can we?

Then there is the financial side of things. Improving a pre-existing structure can be quite expensive and out of the individual’s means.

I remember while growing up, that ALL houses at a minimum had a storm cellar, even if it was just a hole in the ground with a reinforced door, many had basements. I'm not seeing them anymore when new homes are built nowadays.

That is why I will be moving to the countryside. And also why I want to do it right the first time. Heck, it might even bring my insurance rates down.


Do you live in Tornado Alley?

Oh man - the last two years we had quite a few touchdowns in South Africa EF3's, 40km from me. My dad and one sister lives in the area that was hit, but they were lucky they weren't in its path. In truth i cannot talk too much regarding "how to built" cause if an EF5 runs over my home it is "Bye-Bye"


My first memory is of a tornado at 4ish years of age. I watched it turn a barn down the valley from my Grandparents into matchsticks. Messed up the house as well but didn't total it. Thankfully, no one was hurt in the valley, though the destruction was pretty spread out. It was farmland, so everybody was lucky.

It was pretty cool I thought at the time. I was in awe and not scared the least. Of course. my family was in the cellar while I was in the attic watching. Since then, I've learned better. Boy did I get my ass beat for that stunt.


That's awesome! I would have done the same thing. I have always been interested in tornadoes.

I always wanted to go on a chasing tour, but since 2011 i have been less interested in that what i used to call beautiful destruction. I guess after becoming more spiritual i turned my back on what i thought was so awesome. This week's tornado basically nailed it for me.

Look, if i get the chance to see one i will definitely have a peek. 3 years ago i would have "chased" it I am still interested, but I'd rather let people live than experiencing it first hand.

When are you leaving the alley?


When are you leaving the alley?

But I'm in Ohio, so we still have our twisters as well, just not as bad....until you experiance them.