I frequently check the SDO and other solar image data sites like SOHO. What with all the X Class happenings one would want to keep up with the latest EVE data, but there is no latest EVE data. 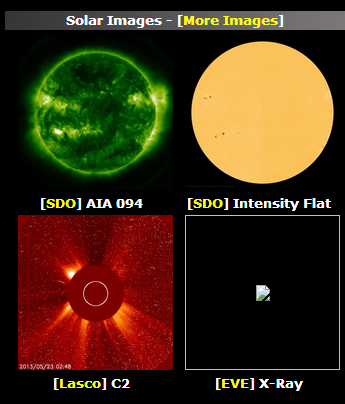 And their data site is non responsive:


Extreme Ultraviolet Variability Experiment
The Extreme Ultraviolet Variability Experiment (EVE), will measure the Sun's extreme ultraviolet irradiance with improved spectral resolution, "temporal cadence", accuracy, and precision over preceding measurements made by TIMED SEE, SOHO, and SORCE XPS. The instrument incorporates physics-based models in order to further scientific understanding of the relationship between solar EUV variations and magnetic variation changes in the Sun.[11]
The Sun's output of energetic extreme ultraviolet photons is primarily what heats the Earth's upper atmosphere and creates the ionosphere. Solar EUV radiation output undergoes constant changes, both moment to moment and over the Sun's 11-year solar cycle, and these changes are important to understand because they have a significant impact on atmospheric heating, satellite drag, and communications system degradation, including disruption of the Global Positioning System.[12]
The EVE instrument package was built by the University of Colorado at Boulder's Laboratory for Atmospheric and Space Physics, with Dr. Tom Woods as Principal Investigator,[6] and was delivered to Goddard Space Flight Center on September 7, 2007.[13] The instrument provides improvements of up to 70 percent in spectral resolution measurements in the wavelengths below 30 nm, and a 30 percent improvement in "time cadence" by taking measurements every 10 seconds over a 100 percent duty cycle.[12]
en.wikipedia.org...

Anybody remember this little low budget made for tv movie from'74?

Where Have All The People Gone?
www.imdb.com...
en.wikipedia.org...


A strange series of solar flares proves fatal for inhabitants of the Earth, except for the fortunate few who are somehow immune from the effects. Animals go insane and human beings turn to white powder, leaving behind only empty clothing. A handful of survivors attempt to rebuild their lives on the de-populated Earth.
www.imdb.com...

On a camping trip in the mountains, a dad (Peter Graves) and his two teenage children are exploring a cave when a solar flare hits. After emerging, they soon find that everyone is dead, and there are only a few survivors left scattered across the country. Most, out of fear and survival, are out for themselves, but as they try to make their way home (where the mother had returned earlier from the camping trip), they find two people that need their help as well as a man who invites them to be neighbors.
They face dangers ranging from wild dogs, who seem to have been driven mad from the solar flare, to a gunman who steals their car. They rescue a woman (Verna Bloom), and later a young boy whose family was killed by two men who stole their car. Besides the physical journey, they struggle to overcome the emotional trauma of the events.
en.wikipedia.org...


I remember that movie! I was a kid and my parents were watching it on TV back in the 70's.

I seem to remember it was a small group of people that had been down in a cave exploring it when the flare happens and when they came out they found everyone gone.