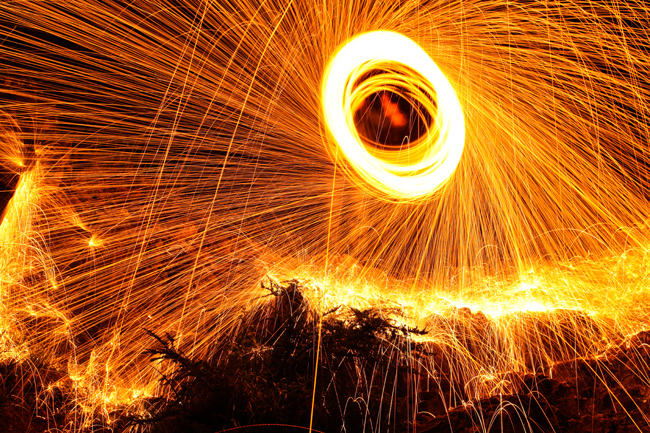 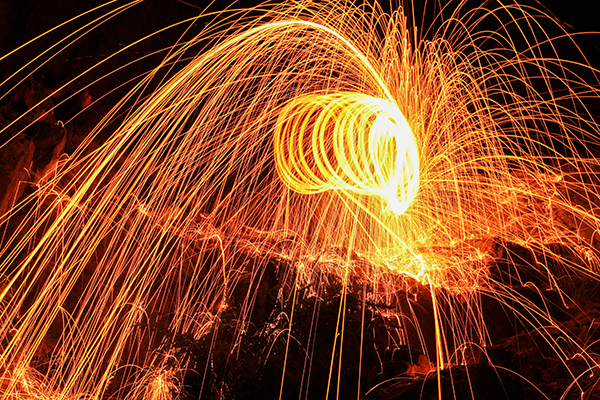 Its a shame reducing the picture in size to fit here really takes out the sharpness.

posted on May, 15 2013 @ 10:00 PM
link
That's very cool. Would it be possible to get rid of the circles in the center? If that was an option, you would almost have a volcano effect. I'm holding off on this stuff for now but do see its potential. Good onya for experimenting


Nice! Steelwool worls! I love doing those! I would love to do some more light painting myself sometime, way to go!

posted on May, 16 2013 @ 01:22 AM
link
Way to go! Did you put the steel wool in a whisk? There are flashlights you can buy with different colored lights like red, blue, green, and maybe some more that should work good for light painting too. Five stars, three cheers, and two thumbs up.


Yes it was steel wool and a whisk. I climbed up a rockface slightly so the sparks had something to bounce off.


not really , that's me stood in the middle swinging round burning metal to make the sparks. Id have a go behind glass but its not really a good idea to do it near buildings in case it starts a fire.


not really , that's me stood in the middle swinging round burning metal to make the sparks. Id have a go behind glass but its not really a good idea to do it near buildings in case it starts a fire.


No, I meant swing it around in a glass vase or something like that.


Not unless i could climb inside a glass vase.


Not unless i could climb inside a glass vase.


What I envision is flaming steel wool attached to a wisk (as you said you did previously) - inserted into a glass vase and wisked about.


You put the steel wool inside a metal whisk and the attach that to a metal cable and swing the whole thing around. The whisk is just to contain the burning metal while it sheds sparks.

The trick is not to get any on you as it will burn through almost any clothing, set fire to hair. we wear safety glasses as well and make sure its all well away from anything that could start a fire. We drove to a cliff near the coast for these pictures.

posted on May, 16 2013 @ 03:29 PM
link
Yes, you could duct tape the opening to the point where it would allow you to whisk, but the embers would not fly up at you. You could even put interesting objects inside the glass vase to create more visual interest as well as more uneven shapes for the embers to bounce off of.


This whole effect is done by using a long exposure 'bulb' mode on the camera. you leave the shutter open for 30 seconds.

You cant put something burning in a jar as it will burn up the oxygen and then go out in a second or two. Plus there is a risk the glass will shatter with the extreme heat of the burning metal.

The sparks only fly out because of the centrifugal force of the spin and more importantly a large amount of fresh air hitting them. When you sing the whisk around on the end of a long wire its like putting you head out of a car at 100 mph..lots of wind and oxygen. It really doesn't burn well until you get lots of oxygen flowing through it by spinning it around. If you dont get it spinning quickly after lighting it just goes out, you need the equivalent of blowing on hot embers to keep it alight.

Ive been proved wrong before though , try it and post the results

posted on May, 17 2013 @ 11:51 PM
link
That is freakin awesome looking! I wonder what it look like if you used one of those spinning fireworks that you nail to a pole? Very vivid colors here btw!


Great post to show everyone how it is done. Now everyone can get out and light up the drive way.


1. We should get a bunch of people out in a field.
2. Arrange them to spell out ATS.
3. Then have everyone light the steel wool and start swinging.
4. Take a photo.
edit on 5-20-2013 by groingrinder because: Edited for genuine cajun flavor.

posted on May, 20 2013 @ 10:55 AM
link
Another cool shot would be to swing the whisk around so that your face is framed in the center. Then have somebody flash an electronic flash at you so that your face is sharp and framed by the sparks instead of being blurry and out of focus. The duration of the shutter speed controls the exposure for the sparks. The aperture setting of the lens controls the exposure of the flash. 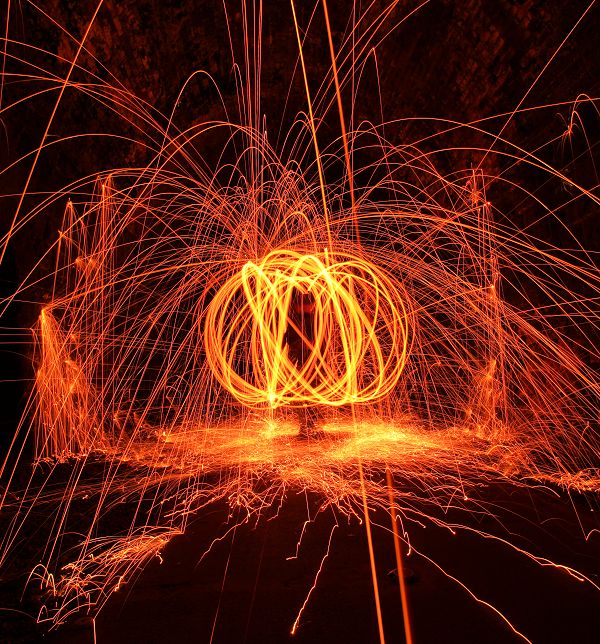 But, hey, this is fantastic.


Thanks InTheLight, TBH these are not the best ones ive done. The better ones are posted on other sites.