I CAN'T BELIEVE THIS IS HAPPENING

A construction company has essentially destroyed one of Belize's largest Mayan pyramids with backhoes and bulldozers to extract crushed rock for a road-building project, authorities have announced.

The head of the Belize Institute of Archaeology, Jaime Awe, said the destruction at the Nohmul complex in northern Belize was detected late last week. The ceremonial center dates back at least 2,300 years and is the most important site in northern Belize, near the border with Mexico.

"It's a feeling of incredible disbelief because of the ignorance and the insensitivity ... they were using this for road fill," Awe said. "It's like being punched in the stomach, it's just so horrendous."

Nohmul sat in the middle of a privately owned sugar cane field, and lacked the even stone sides frequently seen in reconstructed or better-preserved pyramids. But Awe said the builders could not possibly have mistaken the pyramid mound, which is about 100 feet tall, for a natural hill because the ruins were well-known and the landscape there is naturally flat.

"These guys knew that this was an ancient structure. It's just bloody laziness", Awe said. 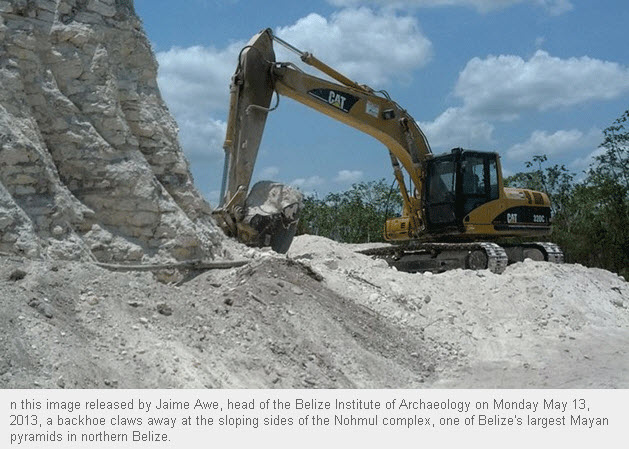 This happens a lot apparently in Belize and the surrounding areas.

Originally posted by Majestic Lumen
I was informed of this not too long ago, and I am in shock, and at a loss for words. I can't begin to express the sadness and anger I am feeling at the moment.

Sigh* There really isn't anything you could do that will even come close to the burning at Alexandria. The rest is just a shame, but merely "just a shame"... The library was beyond what words can describe. And hell, that was how many years ago?