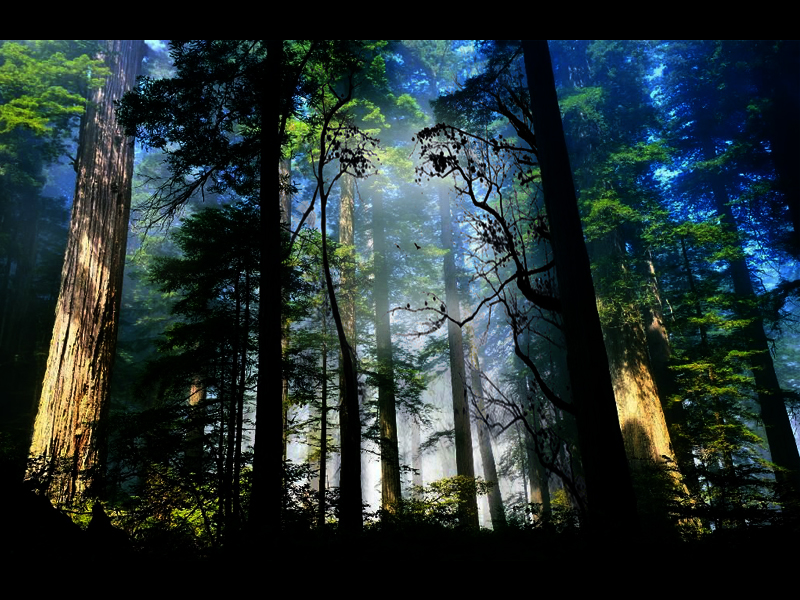 Trees and other plant-life seem to have mutual communication techniques specifically, scientists suggested that plants might be communicating with “nanomechanical vibrations’ that travel underground as a “signaling mechanism,” letting other plants know their presence and to plan accordingly

Now if this seems to be fact than I don't know how to mow my grass anymore. I always found it weird that my neighbor was talking to her plants in the garden, baffling me how it was possible that her garden looked better as mine did.. Now I know , talk to you flowers and plant life. Let them know when you're gonna cut the branches,

Both competitive and facilitative interactions between species play a fundamental role in shaping natural communities. A recent study showed that competitive interactions between plants can be mediated by some alternative signaling channel, extending beyond those channels studied so far (i.e. chemicals, contact and light). Here, we tested whether such alternative pathway also enables facilitative interactions between neighboring plant species. Specifically, we examined whether the presence of a ‘good’ neighboring plant like basil positively influenced the germination of chili seeds when all known signals were blocked. For this purpose, we used a custom-designed experimental set-up that prevented above- and below-ground contact and blocked chemical and light-mediated signals normally exchange by plants

posted on May, 12 2013 @ 03:58 PM
link
Good thread OP. S&F I can contribute some to this, I studied this subject and even did some experimentation.


Oh great so you can tell allot about this subject? Is this a widely accepted study that these science guys are suggesting in this article ?

Also be my guest of answering all the difficult biological stuff that some maybe gonna ask? Because I would love to read them..

Originally posted by 0bserver1
Now I know , talk to you flowers and plant life. Let them know when you're gonna cut the branches,

You do realise that there is no connection whatsoever between this germination experiment and talking to your plants?
If you're going to use SCIENCE to back up your ideas, then you also have to be scientific about it.

You seem to be saying:
One single scientific experiment shows X, therefore my ideas about Y must be true also.


That you can say is true. I cannot say scientifically that talking to your plant life will actually help, but can assume that it will help the relationship between plant life and human life in some way. But you're right when it comes to proving that.

posted on May, 12 2013 @ 04:55 PM
link
Well this is just anecdotal but it always amazes me how my climbing roses always reach for stuff that is there. The one I have always reaches a "feeler" (hows THAT for technical term ) for the bird feeder stand and another always reaches a feeler out to a neighboring butterfly bush. I was thinking just last week how they "know" there is something there to reach to. They never do reach out in random but always towards something.

Of course it could be just me but every year I end up having to cut back that one "feeler". It is definitely persistant.


I hooked up a cordless tic tester for testing wiring to a tree. I was trying to find how the signal was passed through the tree to the branches. To my surprise the signal was picked up throughout every tree within twenty feet of that tree better than through the wiring in a car. I think the trees use the electrolytes in the soils and touching roots to communicate.

On top of that I learned to grow plants requiring full sunlight in the shade and actually improved production of the plant. I gave a little water to the trees around the garden and shared the fertilizer with the trees. Where the trees put their roots to the roots of the vegetables, the veggies grew great, I had about fifty small dense potatoes to a plant...very good tasting potatoes. Where there were no tree roots, the potato plants had a few small potatoes. This showed me that there can be a symbiotic relationship between the trees and a garden, as long as both are being cared for. When I noticed this I studied it. A poplar tree will allow a little evergreen to live under it because they are symbiotic. The evergreen fixes nitrogen for the poplar. All other trees are crushed by branches off the poplar tree. This shows me that the tree knows what is growing around it. I have experience with this, these 90 foot aspen trees do not like cars parked under them, they drop the branches on the car.

The defense system of the poplar/aspen tree is well documented


One day science will say that everything is and will be connected to eachother.. and conscience is in every living thing!

I have experience with this, these 90 foot aspen trees do not like cars parked under them, they drop the branches on the car

Wow that's amazing , trees that actually drop branches to express to their feelings.. Could it be possible that trees can evoke lightning to hit them when something is hiding underneath them?
edit on 12-5-2013 by 0bserver1 because: (no reason given)


According to the Forestry service info I read, when something causes a problem with a root on the tree, the branch above gains water and gets heavy and breaks off easily, crushing whatever is below it. In the case of a car parked under it, it may be associated with lack of water to a root in that area. The article said that this idea of what happens is based on observations that have been made.

Poplar trees also can spread by Rhyzomes, shooting up a new tree about forty feet away in a certain direction. I can't remember if that was north or which way it was. The Tamarack does almost the same thing, I'm pretty sure that is north. This means there is a physical tie in amongst these trees and that they may be actually one organism.

As far as lightning, I noticed that there was what appeared to be a carbon rich rock near the trunk of the trees of the trees here that were hit by lightning. I'm not sure what the exact composition of the rock was. I dug around other trees and removed these rocks by the trunk and the black black soil if I found them. They are very hot with the metal detector. I only had one tree here get hit since then but there is a lot more spider lightning around. Maybe I should get one of these rocks tested, they deflect the compass needle
edit on 12-5-2013 by rickymouse because: (no reason given)

I only had one tree here get hit since then but there is a lot more spider lightning around. Maybe I should get one of these rocks tested, they deflect the compass needle

That's strange any idea what could cause deflecting your compas ?

posted on May, 12 2013 @ 07:27 PM
link
No clue why that happens. I had what looked like a bolt of lightning on one, melted. I decided to try to see what metal the thing had in it and when I broke that one apart it didn't do it anymore. I have another one and that appears to be nodular Magnetite. It's possible that they were both that, as well as the other ones I found that expressed those properties. The part about the lightning I assume is caused the wet bark of the tree conducting energy and the rock somehow accentuates the property.The one I broke apart broke all weird leaving all sorts of strange twisted shapes.

The people who lived here long ago seemed to like to collect rocks. Like the one my avatar is made of. The avatar rock has a hole in it the shape of a marrow hole of a soup bone, but it is way bigger of a bone. It doesn't have magnetic properties like some of the other rocks around here though.

Back on topic, the forestry service in Montana/Wyoming has many interesting articles written over the years by their employees on unique properties of trees and their defense systems against preditors and bugs. Surprising that this forestry information was never let out to the public till about 2008 or so, it was released when Obama took over and the government made these public.
edit on 12-5-2013 by rickymouse because: (no reason given)

posted on May, 12 2013 @ 09:29 PM
link
This is all so interesting. We think we know about things and yet we come to find that we are only scratching the surface.

Btw, this all reminds me of the movie "The Happening" by M. Night Shyalaman.