Although it may seem like an alien mothership, it's actually a impressive thunderstorm cloud called a supercell. Such colossal storm systems center on mesocyclones -- rotating updrafts that can span several kilometers and deliver torrential rain and high winds including tornadoes. Jagged sculptured clouds adorn the supercell's edge, while wind swept dust and rain dominate the center.
A tree waits patiently in the foreground.

The above supercell cloud was photographed in July 2010 west of Glasgow, Montana, USA, caused minor damage, and lasted several hours before moving on.

Lots of other photos of these monsters in Sean R. Heavey site here 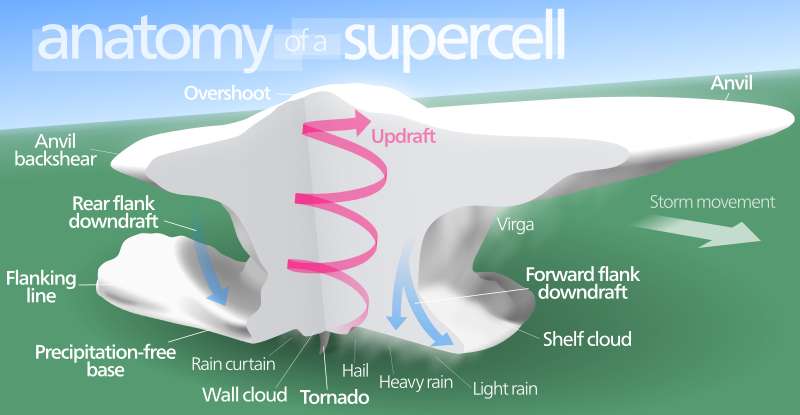 
The Mothership
Supercell thunderstorm rolls accross the Montana prairie at sunset.
This is a stitched panoramic composed of four images... Taken July 28, 2010

But still, clouds are amazing
Btw amazing pics on that site.
edit on 5-5-2013 by Dumbass because: (no reason given)

posted on May, 5 2013 @ 04:12 AM
link
That is an awesome picture. Though I never really thought they looked like spaceships.

Supercells are my favorite kind of thunderstorm. The fact that the rotating updrafts can go up to 75,000 feet really boggles my mind. And scares me a bit too. Can you imagine a 75,000 foot tornado? Albeit the wind speeds in a tornado are strongest near the surface, it would still be scary to see such powerful winds reach that height.

Originally posted by Dumbass
That is a cool pic, but I was hoping for a new one as this is an older one


That's right and thanks for the correction

Here's a newer one, taken the 27 April this year in Wash ita, Oklahoma by Kelly Delay, a storm chaser:

Intercepted a amazing supercell in Wash ita, Oklahoma this afternoon. Drove from Dallas to Elk City to storm chase. This is a 14 image stitched panorama to show how large this storm was. Excellent storm!


It is amazing right? For me it became much more... how to say that... I could imagen the shear scale of it all when I realized that air (in the state of gas) can somehow relate to water as a fluid. It has similair dynamics in the sense if movement.

In water it us much more clear that everything moves from bottom to surface. Normally we dont think of air like that it is just windy. But when I talked about wind with my 4yo kid it was for him much easier to understand.


That is a good one too, would love to see that in real again.

posted on May, 5 2013 @ 03:11 PM
link
reply to post by elevenaugust
Oh my. That is one truly hypnotizing photo. Having seen what those downdraughts can do like fatal collapsing soundstages for example, I would want to stay well clear of it, but on the other hand it makes a person want to just stand there in total awe. Thanks for showing this.

The weather is par none.

Originally posted by elevenaugust
Is that a spaceship or a cloud?

It would be a good way to hide a spaceship lol


It most certainly is.

And it is actually quite correct saying that the movements are fluid-like, since there is plenty of water vapor in the updrafts, as well as water droplets.

posted on May, 6 2013 @ 12:30 PM
link
Is it possible that there is a mother ship generating this phenomenon from above, and it is hidden, and the plasma discharge reaction with HAARP modulation generates the phenomenon?