has the iranian president been arrested?

if it is proven to be correct, perhaps the decisions made in iran regarding the wests attack on their existence, whatever their excuses may be, will be different to what the president and supreme leader may have chosen.
perhaps they will be more aggressive.
in islamic prophecy a one eyed man will have a lot of influence in these latter times, but i've seen no sign of him yet.
and so far, even tho a mutual assistance pact has been signed with syria and iran, we dont see any open support of syria by iran. could this all change if a coup has taken place?
whatever the outcome, i dont see the middle east situation cooling any time soon, especially as the U.S. has previously announced the take down of several mid east countries. some of the dominos have already fallen, syria is in the process of, and iran is next on the list.

Most of the sources seem to be recursively parroting the original WND article, so there isn't any third party confirmation on this yet.

A possibly related arrest of an Iranian diplomat earlier in the month:

Some background from a site that describes itself as "an independent website that focuses on delivering high quality content on Iranian politics today to a broad English-speaking audience including students, academics, analysts, policymakers and the general public."

I'm not sure if this site isobjective or not. I just came across this searching for news on the subject matter: If anyone knows the validity of this site, speak up.

Huffington Post linked article that speculates on possibility of house arrest for Iranian President that was posted today:

Huffington Post - Could Ahmadinejad End Up Under House Arrest?

And here is commentary from the author of the Huffington Post article on the alleged incident:

The Iran-Israel Observer - On Reports of Ahmadinejad’s Arrest

A different and debunking perspective:


thanx for those links/stories. they all seem to be repeating the original gossip. maybe it IS fiction but for what purpose i cant imagine. those its meant to hurt would surely see thru it. time will tell.

Tehran, May 1, IRNA – US news website World Net Daily which had a record of publishing anti-Iranian news items among its Wednesday news claimed baselessly that IRI President Mahmoud Ahmadinejad was arrested temporarily by some Iranian security forces Wednesday evening.


Iranian intel believes this was designed to sway voters in the upcoming elections?


Yeah, I searched around and only found the same articles you are provided. Seems part to find a third part source for this one. Without a original source, i.e something directly out of Iran, it should be consider something someone just threw up on the net without and simply `said` is was true and the media ran with it. I see this happening a lot with North Korea as well. Someone simply says something is true without providing original source and the media runs wild with it.

All this claim needs is some kind of statement from the Revolutionary guard, state media or a government official in Iran and it will have teeth. A traceable name attached to that statement would also give it even more teeth.


S&F OP and other posters, these alternative news sources are right many times and the savvy conspiracy theorist knows to look into what they say rather than simply discounting them as " that's just WND or Before its News ect.) They do get it right sometimes! Perhaps even the vampire boy is real??? Check it out.


Could the one-eyed man be a reference to the "All seeing eye" that is all around us? Perhaps it is symbolic of Western influence? Thinking of it in that light, it would seem those times are upon us?

FYI - I know next to nothing of Islam, this just being something that pondered through my head as I read your comment.. 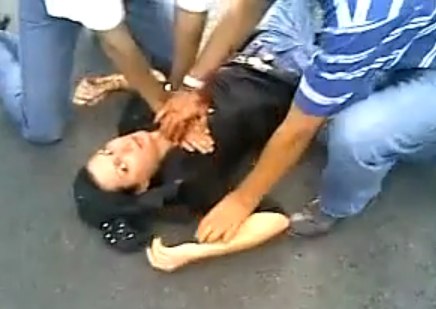 it is odd, because a president can not get arrested !
first a president should get evicted from presidency then they can arrest him !!
unless a coup has occurred !!!
while there is no sign. I think they are testing their propaganda machines for upcoming presidential election in Iran !!!!

prophet of Islam: "No prophet was sent but that he warned his followers against the one-eyed liar (Ad-Dajjal)(Anti_Christ). Beware! He is blind in one eye, and your Lord is not so, and there will be written between his (Ad-Dajjal's)(Anti_Christ) eyes (the word) Kafir (i.e. disbeliever)."
what is the philosophy of all seeing eye ? muslims believe that it is the sign of Anti_Christ ! for example in this thread.
www.abovetopsecret.com...

posted on May, 2 2013 @ 06:47 PM
link
Well then I was right on par! hahaha. though personally, I am not sure whether or not I believe in ancient prophecies, religious or not; although there has been a lot happening recently which has made me rethink a few things for sure. But in all reality, who the eff knows lol.


Elections in Iran are coming up,so it is usual high season for the propaganda machine...I am sure we will see a lot more coming up in the following weeks...CIA, Mossad and MI6 are also busy doing their routine sabotaging tactics.....Let's hope murdering innocent civilians is not a part of their plot,,again.