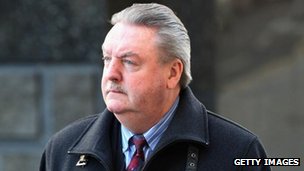 A jury at the Old Bailey found Jim McCormick, 57, from near Taunton, Somerset, guilty on three counts of fraud over a scam that included the sale of £55m of devices based on a novelty golfball finder to Iraq. They were installed at checkpoints in Baghdad through which car bombs and suicide bombers passed, killing hundreds of civilians.

Was this guy really clever or were the people buying it really stupid? Maybe it was both! The whole concept behind the devices he was selling just seems laughable.

could bypass "all forms of concealment", detecting drugs and people along with explosives, the court heard.

He claimed they would work under water and from the air, and would track an object up to 1km (3280ft) below the ground.

The bomb detectors came with cards which were "programmed" to detect a wide array of substances, from ivory to $100 banknotes.

Other substances could be detected, it was claimed, if put in a jar with a sticker which would absorb its "vapours" and was then stuck on a card that would be read by the machine.

In reality, McCormick's device was based on $20 (£13) golf ball finders which he had purchased from the US and which had no working electronics. 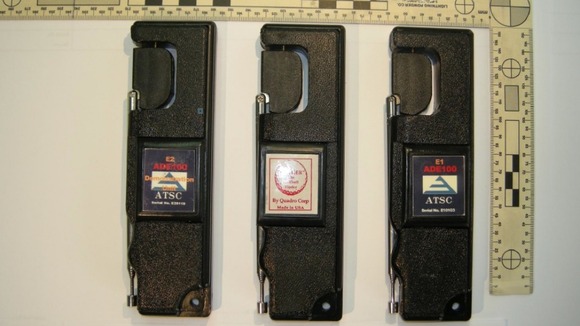 Its really hard to believe that this guy managed to sell these things for anything up to $55000 each. I mean didn't anyone even test them? Many of the reports say that these are still being used in Iraq right now! He even managed to sell a batch of them to the UN.

I think that the people who bought these things without putting them through rigorous testing should at least face the possibility of losing their jobs. One of the detectives in the investigation said he is absolutely certain these devices have cost people their lives.

posted on Apr, 24 2013 @ 01:25 PM
link
The problem with beaurocracy in the military, is that you end up with people who have no clue about the mission a product is supposed to perform in charge of procuring things.

Throw in some cronyism, and you end up with situations like this all too often.


Amongst other property he bought with his ill gotten gains was a house in Bath Somerset he bought from actor Nicholas Cage.

posted on Apr, 24 2013 @ 01:29 PM
link
that is pretty funny if you think about it. like you would think some self testing would of gone on before they put these devices into the field.

anyways this is just another case of military ignorance. and a bit of golf ball tech

what they didnt notice replica on the side he just sold them replica bomb detectors :d

posted on Apr, 24 2013 @ 02:01 PM
link
This reminds me of the guy who sold black boxes that were supposedly able to detect drugs which police agencies in America started buying up and using them in schools instead of drug dogs. Essentially they were black plastic boxes with nothing inside of them and had a little LED light that lighted up randomly.

It kind of goes to show how stupid the system can be in certain circumstances.

The one I'm speaking of, I found hilarious, and a great troll of .gov, so-to-speak.

In the OP case, this played with people's lives. Not funny at all.

*I should mention the previous fraud I did find funny in certain circumstances like when a school board maintained their use of them even after knowing they were fake, yet, that being said although funny, I do not condone the behaviour of the fraudsters behind it.

And, if you see my next post you will find information that seems to tie the two in together. Possibly the entirely same people behind both frauds.
edit on 24-4-2013 by boncho because: (no reason given)

The people who bought these are stupid for not testing them first and need their heads examined.

The geezer who sold them, knowing full well these devices don't work and knowing what they will be used for needs locking up and the money he made should go to the victims families of bombs that went undetected.

(I'm not aware of any incidents where the bombs slipped past but if there were then the victims families should be compensated, imo.)

He made money from putting civilians at risk.
edit on 24/4/2013 by SilentE because: (no reason given)

He managed to sell these to corrupt officials in Iraq etc by giving huge kick-backs brokered in the Lebanon - probably why the Iraqies are still using them; either that or expose massive corruption that seems to be endemic.

No morals, no conscience.

The Quadro Tracker, also known as the Positive Molecular Locator, was a "detection device" sold by Quadro Corp. of Harleyville, South Carolina between 1993 and 1996.

Around 1,000 were sold to police departments and school districts around the United States on the basis that it could detect hidden drugs, explosives, weapons and lost golf balls.

In 1996, the FBI declared it to be a fake and obtained a permanent injunction barring the device from being manufactured or sold. Three principals of Quadro Corp. were charged with mail fraud and conspiracy to commit mail fraud, but were acquitted in a trial held in January 1997.[1]

Here is something interesting, the story I mentioned was designed off of a golf ball finder similar to the OP story:

The Quadro Tracker was invented by Wade L. Quattlebaum, a former used car salesman from Harleyville, South Carolina. He was said to have devised the Quadro Tracker after he was trying to invent something to find lost golf balls.[2] It was sold through his company, the Quadro Corporation, between 1993 and 1996. Around 1,000 Quadro Trackers were sold at prices of between $400 and $8,000 per unit.[3]


And look at this! The same "locator card" set up was used, where supposedly a the 'signature' of the item you are trying to find has to be loaded into the machine first in the form of a card:

The device consisted of three principal components. A "locator card" purportedly containing a "signature" of the object to be detected was inserted into a plastic "card reader" about the size of a tape cassette that could be attached to the user's belt.

A number of school boards and police agencies got fleeced in the previous scam, some even refused to stop using it once the fraud was uncovered:

Numerous US school boards, airports and police departments purchased the Quadro Tracker before it was banned.School officials in the McKinney Independent School District declined to discontinue using the device even after it was banned, saying that they hoped it would be a deterrent: "We're not looking to nail a particular kid. We're looking to send a message."[10]

Now, this I find very interesting, but the two main names associated with the frauds are not the same. There surely has to be a link somewhere?

James Randi has been on the case, here is his comments on the matter:

He also speaks back to the time the Quadro Tracker came out. Back then, even after he alerted them to the fraud, a number of agencies continued to use them. It was the FBI who finally made action against the fraud.

It seems when the Quadro Tracker went defunct, the principals took the fraud out of the US and exported it to the UK. James Randi was on the case and even contacted UK officials about the continuing scam. Also offered his 1 million dollar prize to anyone who could show that the new labeled devices worked. He was actually quite involved in trying to tear down this fraud, it's unbelievable that people got away with this crime for so long.

Imagine how a couple of kids in the US could steal someone's credit card number, buy a bunch of stupid things like name brand clothes, etc, and then get prosecuted to the fullest extent of the law! and in this case, this is putting people's lives in jeopardy, it's a brazen outright fraud, and nothing! People are defending it!

I'm amazed events like this occur with the kinds of insane witch hunts that go on, led by bored and over zealous prosecutors and their agencies/foot soldiers.

posted on Apr, 24 2013 @ 11:20 PM
link
Well I watched this news item, it was the first news item on Newsnight, BBC2 on Tuesday, and I just couldn't believe what I was watching. How a man could have boxes upon boxes that were useless and pointless, yet certain people still paid thousands for each one.

The first thing that sprang to mind was how come they didn't try them out first to see if they worked before they bought them. I can honestly say that I have never laughed so much while watching the news, at one point I actually thought I was watching a spoof news TV programme such as The Day Today, or Brasseye..........Unbloodybelievable.............Hahahahahahahaaaaaaaaaaaaaaaaaaaaaaaaa!!!!!!!!!!!!!

The same people who will believe anything without question. Are usually dodgy themselves.

posted on Apr, 24 2013 @ 11:54 PM
link
how do we know if our Anti ballistic missiles aren't filled with cotton candy or are the data networks in utah running on windows 98???