Wonder what is up with this sudden mystery disappearance!

Left his phone, his wallet, everything but the clothes on his back. This would appear to indicate that he had no intentions of coming back. Sunil left a note before he left apparently hinting that he was planning some sort of "publicised event". t

I was wondering if this is one of the assailants from MIT, as explosives have been mentioned in the media.

I'd not be surprised if another bombing is 'allowed' orchestrated in his person!

I've been following her posts for awhile now...she just mentioned CNN called her house and I see a person that claims to be a producer with NBC10 wants to talk with her about him!

I read that she believed he resembled one of the bombers, and would have to agree, the comparison is very close.

The suspect I see on camera seems to look shorter from comparing pictures, malnourished, more hair growth and has a bit of a strange walk...surely someone would know how he walks if it it Sunil, unless he is trying to walk like that on purpose to not be identified.

Frontal head shot pretty much is a match!

This YT description state he's been captured.. dunno how much that weighs in though =/

posted on Apr, 19 2013 @ 02:59 AM
link
Have You Seen Sunil Tripathi? Missing Brown University student who has ties to Newton.
newton.patch.com...

posted on Apr, 19 2013 @ 03:04 AM
link
Intriguing.. his connection with Newtown (his Aunt lives there and last text communication with there) places him in some sort of contact with possibly other plotters.. of whatever.

Ok so whats bizarre is he is a registered MISSING PERSON since 3/16 but has been positive ID'd at the Boston marathon yet is still MISSING from all BU colleagues, friends, and even his own family are still "looking" for him... that is beyond jacked up!


Suspect #2 (white hat) is hiding somewhere in Watertown (could have killed himself, maybe not) within the perimeter set up by SWAT, FBI, police, National Guard. Suspect #1 (sunglasses) is dead. I heard he either blew himself up or blew up after being killed because he had explosives on his body. The explosives on body could be false. Another man, who you may see in a video of him laying on the ground with lights shining on him and police surrounding, was told to strip naked to be sure he had no explosives I suppose and then questioned and later released. So as of now they are only looking for Suspect #2.


Well it's probably because it isn't 100% confirmed, but in my mind it's pretty much without a doubt him based on what I've seen.
edit on 19-4-2013 by SeriousIndividual because: (no reason given)

wonder if he hiding in Watertown, if not Newton with aunt?


THERE is speculation the Boston marathon bombing suspect being sought by police may be Sunil Tripathi, an Indian philosophy student studying at an Ivy League college who disappeared without a trace on 16 March. ...

Tripathi has been described as a "left-wing Marxist of Indian Brahmin descent", whose father is a successful software developer. His family set up a Twitter account and a Facebook page last month to help the search for him. ...

It has been suggested the name of the second suspect – who is believed to have died of gunshot wounds following a shoot-out with police – is Mike Mulugeta. At this stage, authorities have not confirmed the names of the suspects.

The two suspects, according to authorities, then hijacked a car at gunpoint in Cambridge. They released the driver a half-hour later at a gas station.

As police picked up the chase, the car's occupants threw explosives out the windows and shot at officers, according to the district attorney's office.

Officers fired back, wounding one of the men, possibly the person identified by the FBI as suspect No. 1, who is seen in the images released Thursday in a dark cap, sunglasses and wearing a black backpack.

The man died at Beth Israel Hospital. He had bullet wounds and injuries from an explosion, according to officials. The second man apparently escaped on foot

Great link on info about the at large suspect...
www.theatlanticwire.com... 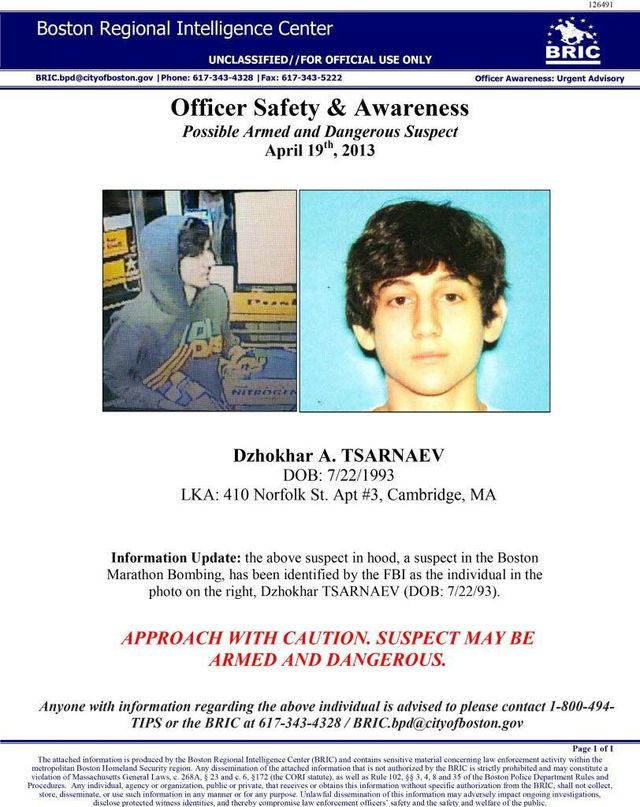 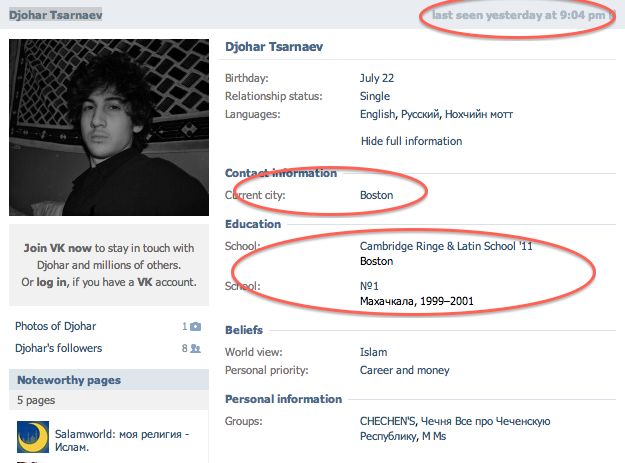 I believe in the lower left, the Russian after "Salamworld" is translated as "My Religion - Islam", but I'd need a better speaker than I to confirm it.
edit on 19-4-2013 by Gazrok because: (no reason given)

posted on Apr, 20 2013 @ 12:23 AM
link
The good that came out of this is that his disappearance has gained much more attention than it would have if he hadn't got caught up in the whole mess.

posted on Apr, 20 2013 @ 12:29 AM
link
somehow Mike Mulugeta has dropped out in the media, and been replaced with the older Tsarnaev. posted on Apr, 26 2013 @ 03:23 PM
link
He was missing a full month before the bombings, so likely was not involved. In fact, more likely than not, he was dead when they took place. As far as I know, no cause or time of death yet. According to his family, suicide is not off the table.