Hey ATS! what do you think of THIS photo from the boston marathon.

posted on Apr, 18 2013 @ 05:50 PM
link
in this photo i found on line i have noticed some peculiar things that i would like to point out to see if you guys think they amount to anything.

i airbrushed out the faces to try to limit the personal exposure to the individuals. 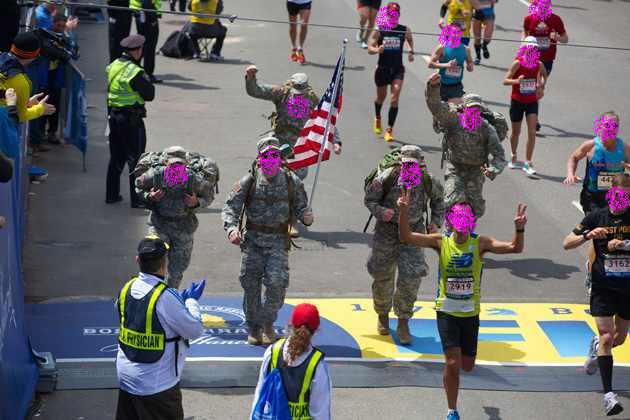 i looked up the runners finishing times by their bib numbers at the race results page and i found that they were finishing at 3hours 01minute.

so this picture was taken about two hours before the blasts went off.

anyway, the first thing i found wrong with this photo was that the gentlemen in the fatigues wearing backpacks and walking, were shown finishing this race with these other runners, who were running.
they are obviously not running with all that equipment.

so i thought that i would check their times to see if something might explain that.

that is where i found another problem with this photo.
the men in the fatigues are not wearing numbered bibs, yet they appear to be finishing the event.

now, i have competed in various sporting events before. and i always study the rules so that i don't do anything wrong, and or, i know what i can get away with,
and, in every type of event that i have participated in there is always a rule concerning the assigned numbers for the event.

they state in general, that you must cross the finish line with the number plate or bib that is assigned to you, and it must be unmodified and displayed/ mounted properly or you will be disqualified.

as these men did not have their numbers, it appears that they are not part of the event, yet they are crossing the finish line.

normally, this would cause a concern and officials/ scorers would have a word with anyone doing this.

but wether that happened or not, they must have jumped on the course somewhere close to the finish because they are neither entered in the race, nor did they have time to traverse it from the start line at a walking pace.

and, remebering that their was loss of life and many injuries that day, i feel that we should be concerned, and look into the possibility that these men may have been responsible for what happened that day.

in fact, they may have bought these clothes online or at a surplus store.
what they are wearing is not an indication of their nationality or any other type of service, occupation, or affilliation.

next, it is concievable that they went to the area where the bombs went off directly after crossing the finishline to plant the bombs.

they are obviously carrying something in their packs.

the area that the bombs went off at was close to the area that military members who were entered in the race were hanging at, and that would be a convienient place for them to remove their packs and place the bombs without arousing suspicion.

remember that they had plenty of time after crossing the line, they may even have blended slowly into the scene their so that suspicion was not aroused as to 'hey! how'd you get done so fast!'

there were possibly 5 bombs, and 5 large obgects can easily be seen in their packs.
also, it was said that the bombs were in black packs.
it would make sense to 'double bag' the bombs, and leave them in black packs instead of camo, which would arouse suspisions if that were the case.

these men may or may not have had anything to do with the presense of the military members there.
they could have simply seen the website of the group online
and planned their activities around it.

i submit this with the hopes that you will find this to be good information.
i don't place blame on any group, religion, or nation/ government.

the image used was found at motherjonesnews if you are looking for it.

"When you're over there, you almost expect it," First Sgt. Bernard Madore, who served two deployments in Iraq, told USA Today. "I've seen bombs go off. This was by far one of the most horrific scenes."

The group of racers, who took about eight hours to complete the 26.2-mile trek, was near the finish line on Monday when the blasts went off and quickly mobilized into action.

“We just tore that (fence) down and just allowed us to get in there and pull what was remaining -- the burning debris, burning clothes -- all the stuff that was on these people, just try to clean it the best we could,” 1st Lt. Steve Fiola, who participated in the march, told the Military Times.


I mean, why isn't *THIS* being talked about more. These guys deserve to be honoured for a: raising funds for charity by doing this, and b: for being there and helping out as they know best they can in a crisis.

instead they're looked at with caution and wariness.

posted on Apr, 18 2013 @ 06:08 PM
link
You must not know many people in the military.
Yes the majority are just in above average shape. But there are many of us who defy reason with our physical conditioning.

I did a twenty mile run last week with a pack containing bricks, after I had already been awake for 22 hours, and I had strep throat. I'm sure I could have done another six.

Also, who is going to tell a few guys in Army cammies, carrying an American flag, that they can't run?

Sure, it should be looked into, but I would bet there was nothing nefarious involved with those individuals.

yes, the group of ruckers who were walking the 26 miles were said to have finished, the last finisher anyway, in 8 hours.
some would have finished quicker, but, yes, 3 hours to walk the course is impossible.

to show that these individuals were ariving at the 3hour mark, i looked up the times of the other finishers they are next to.

their times are 3hours 01minute.

that's kinda the basis of this conspiracy.

have you ever tried to run with a fully loaded rucksack on? Probably not i'm assuming. It can be hard and when you can, you walk instead of run and vice/versa. Also they appear to be crossing as closely together as possible, you know like a TEAM, so when one walks they all do, when one must run they all run.

The reason I think that they have no numbers is because it's the military.....they work as a whole team not an individual, they start together, they finish together.

Maybe they are in the race for fellow fallen soldiers, or for a sick loved one or for well who knows but please wait before you speculate. Remember innocent until proven guilty?

I understand this is a conspiracy site and that anything and everything can be or not. I just think that often times the Military gets a bad rep and I think that sucks.


nefarious would be simply finishing a race that you were never entered in.

posted on Apr, 18 2013 @ 06:13 PM
link
I thought perhaps these were military who guys were just cheering in another military man at the finish who WAS in the marathon.
edit on 18-4-2013 by smurfy because: Text.

posted on Apr, 18 2013 @ 06:15 PM
link
The Tough Rucks are allowed to walk the course to raise money. They begin at 5am. They are not part of the actual marathon, but follow the course, this is done in corporation with BAA.

You could learn a lot by looking at their web page, Tough Ruck 2013

Not sure if those guys are actually in the military (or are just wearing camo) but I have to question how or when they entered the race?

Where are their bib numbers?


This post is so insulting I don't have the words.


thanks for the kind words.
i'm sure many her will not take the time to understand what is being said in my OP and will flame me for something they misread.
i guess that is to be expected under the circumstances.

these types of events tend to drive people apart and it makes it difficult to bring justice to the victims.

hopefully members will see that i am not trying to accuse military personell, i actually feel that it is them who are being used here.

Originally posted by OneisOne
The Tough Rucks are allowed to walk the course to raise money. They begin at 5am. They are not part of the actual marathon, but follow the course, this is done in corporation with BAA.

You could learn a lot by looking at their web page, Tough Ruck 2013

if they were allowed to start early that would negate my basic premise for this thread.
i had tried to find a number of different conventional ways to explain what i had found here and i did not come across any.

if you could, please find where that info is presented, i did not see it on their site previously.

Originally posted by tinhattribunal
if they were allowed to start early that would negate my basic premise for this thread.
i had tried to find a number of different conventional ways to explain what i had found here and i did not come across any.

if you could, please find where that info is presented, i did not see it on their site previously.


From the link I posted:

+Never interfere with the elite competitors in any category, courtesy to them and the BAA for allowing us on the course.


The Boston Marathon blasts occurred about 12 seconds and 100 yards apart at about 2:50 p.m., three hours after Ethiopia's Lelisa Desisa won the 26.2-mile race.

so, from what i've got here, it looks like the race would have started about 10:00.

and if the ruckers started at 5:00, and were not required to have the numbered bibs,
then it should be them coming over the finish line in the photo which should have been taken at about 1:00.

see what happens when we all work together.

i apologize if anyone's feelings were hurt.
i would like to again point out that i did not accuse millitary members of this.
it would be possible for anyone to dress up, but that doesn't seem to be what happened here, as the time difference is now settled.

posted on Apr, 18 2013 @ 08:00 PM
link
Yeah after all the info was buried deep into the first sentence of the MotherJones article the picture is from. So much for knee jerk reactions.