posted on Apr, 14 2013 @ 11:00 PM
link
Came across this recently and it sparked my interest. I often thought that there might be partial or totally invisible organisms to the naked eyes in our own atmosphere or strotoshpere. Could these "Zeriods" also be in our space as well as in outer space?

These are Bioforms which may populate the recesses of free space. 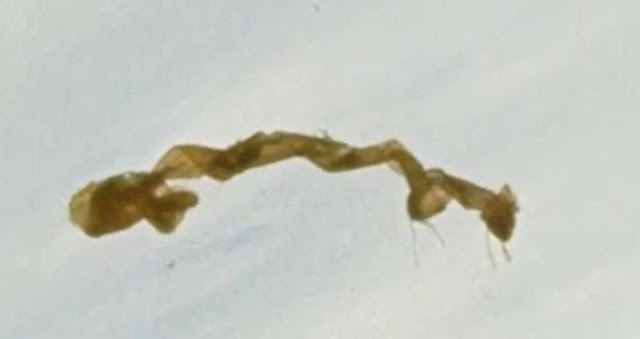 This domain is characterized by virtually zero temperature and zero atmospheric pressure. Russian astrophysicist Dr. V.l. Goldanskii argued that appreciable quantities of prebiotic material should be able to accumulate in the regions surrounding nebulae, or titanic gas clouds.Already dozens of organic compounds have been identified in space, including formaldehyde, prussic acid, and cellulose. In short, there is an abundance of basic building blocks out there to allow for the evolution of zeroids. 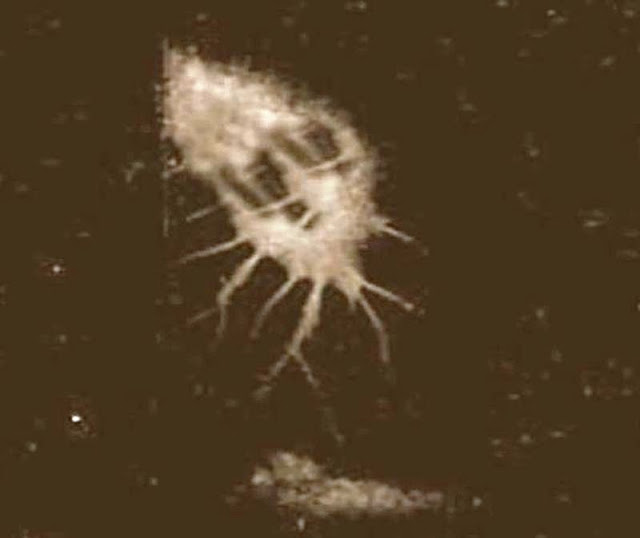 Zeroids may have migrated to all sectors of space -- both within and without galaxies. Endowed with both mobility and intelligence, it is conceivable that some may have actually penetrated our zone of existence.

posted on Apr, 14 2013 @ 11:37 PM
link
I have often wondered as to whether small microbes of this nature could exist in free space. We know of course, as you said, that they exist in the earth's atmosphere, but what about in an environment with no gravity, and no gases of any kind? I figure that the most likely place for these puppies to exist is near some type of gas in space, whether it be a nebulae, star, or whatever, which falls in line with the link you provided. This just seems the most practical to me, considering that gravity should not be essential for certain types of life. We evolved here on earth, as did all other creatures, contending with gravity, and thus zero gravity will negatively affect us and many other species...But there are species on earth that can survive without gravity, despite the fact that they have never known anything but gravity, therefore something that developed from free forming gases in space may very well not need any gravity at all, as the gravity between gas clouds is negligible in most instances.

The bigger problem is lack of anything in free space. So I do not think an organism could spring into existence without some other substance or element to first give it life. Even though I believe in God, I think God works within the confines of the universe He created. Thus, even miracles have a natural explanation, and all we have to do to understand it is explain the natural processes at work. Anyway, what about organisms that form near gas clouds of this nature, but are later ejected out into empty space? Could organisms of this type have populated all corners of the universe by this time? I suspect that if they formed not long after the creation of the universe, then there very well could be many of them by now.

Could they have formed so early? It depends on the complexity of their makeup. If it took relatively few different elements to form them, then they would have appeared in the universe earlier than other lifeforms that needed more complex chemical reactions to spring into existence. By far this is one of the most interesting space-related subjects out there in my opinion, and hopefully we will be able to figure out more in the coming years. To my knowledge nothing of this nature has ever been discovered. If it has, I apparently missed it. I did not really read much of what you linked, so I am not positive as to whether these creatures are being claimed to exist, or if they have been proven to exist. I would not think they have been proven to exist, because there is more of a chance that they do not exist at all, although it is quite possible, as I already stated.


I first thought about creatures living in our atmosphere when I'd heard about "rods". Those things that are seen on video recordings when slowed down. Granted most of the "rods" are proven to be either birds or bugs, there are some that are just too questionable.

There is soo much that we don't know. When we think that we are finally starting to grasp the concept of mother nature and everything involved, something fantastic is then discovered.
I remember being in school and learning about the ecosystems. 3 or 4 new ecosystems have been discovered alone in the last 20 or so years, as an example.


I find this interesting also. It needs more sources though and information to flesh it out. Have you dug up any other material from other sites?


Interesting theory and not beyond the realms of possibility in my opinion , kind of like Space Plankton I guess .


With the protracted passage of time, such matter could ultimately evolve into some form of life, suited to the brutal confines of space. Already dozens of organic compounds have been identified in space, including formaldehyde, prussic acid, and cellulose. In short, there is an abundance of basic building blocks out there to allow for the evolution of zeroids.


Morphologies may vary from the utterly simple to the extraordinarily complex. They may live singly or in vast colonies. It should, of course, be stressed that humanoid forms are not to be expected. But, intelligence might be a developed feature.


Zeroids may have migrated to all sectors of space -- both within and without galaxies. Endowed with both mobility and intelligence, it is conceivable that some may have actually penetrated our zone of existence and been seen as UFOs!
www.huffingtonpost.com...

I remember Star Trek TNG had a story line with a similar concept where the Enterprise was caught in a mass of two-dimensional lifeforms.


Commander Data and Commander Riker realize the two-dimensional creatures are heading for a cosmic string, with the Enterprise in tow, and once they reach the string the ship would be torn apart. Realizing Deanna's loss and the ship's predicament are somehow linked, Captain Picard pleads with her to try and communicate with the strange creatures.
Star Trek TNG... The Loss


I have long seen Planets as islands and Space as the Ocean that separates them , I see no problem with creatures living in that Ocean .

Franklin Ruehl is an American ufologist and cryptozoologist. He holds a Ph.D. in theoretical nuclear physics from the UCLA.
Franklin Ruehl

posted on Apr, 19 2013 @ 03:16 AM
link
I wonder if any living organism inhabiting space as its ecosystem would be necessarily physical, as we might define it? But rather of a wholly 'other' nature given the totally opposite kind of environment as compared to all the others we are familiar with as planet dwellers.

More energy based, or something complex but on a single element-type foundation?


I guess the only limit to the possibilities is our imagination when it comes to types of life living in the vacuum of Space , creatures made of pure energy or silicate based life forms in the mix .

It may also be possible that carbon based biological life forms could exist by developing their own Spacesuits ...


When zapped with plasma radiation, tiny critters like a fruit fly larva , larval mosquitoes develop a gooey nano-suit that seems to protect them that seals their bodies from the harsh vacuum conditions.

The researchers noted that outer space is filled with electrons and plasma. As such, one might speculate that life that got blasted off the surface of a planet into space might conceivably develop protective nano-suits when exposed to such radiation, helping protect them against a vacuum,

Hariyama said. "Since the time of Darwin, many hypotheses for the early evolution of life have been proposed, including the panspermia hypothesis that simple life forms can travel widely through the universe," Hariyama said.
Gooey Suits Help Teensy Critters Survive Space Conditions

Perhaps even one of these ... 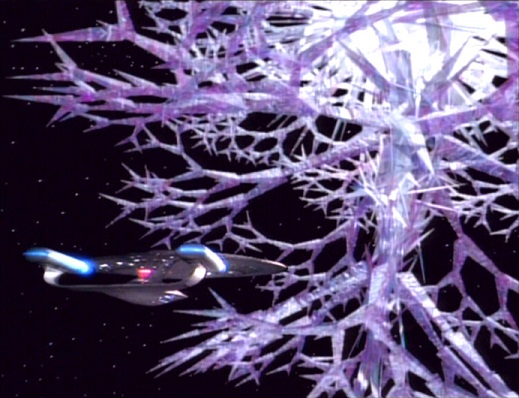