Must See CIA Presentation: 'Big Data Is the Future and We Own It',

Here are a few quotes-

"You're already a walking sensor platform, "You are aware of the fact that somebody can know where you are at all times because you carry a mobile device, even if that mobile device is turned off. You know this, I hope? Yes? Well, you should."

"Since you can't connect dots you don't have, it drives us into a mode of, we fundamentally try to collect everything and hang on to it forever,"

EVERYTHING we do online and increasingly in every day life is being recorded and will be available for analysis. Now, intelligence is good, we want security services protecting us, but rights to privacy are seemingly a thing of the past.

Smartphones can identify you by your walk. Hunt says this would be good because a bank for example could verify your identity by your gait!

Check out the video, it is complete with slides from the presentation, it is stuff we already suspect, but here it is, openly admitted, it isn't something to be expected in the future, it is already here. Technology is developing at such a rate it is seemingly out of control. The problem is, the technology has created a complete surveillance state.

posted on Mar, 23 2013 @ 02:58 PM
link
All this combined with advances in software facial recognition, the more advance technologies will only make it harder and harder to stay anonymous.

In order to be off grid will require people living like crazy mountain cave dwellers.


The behavioral school still plays a part in conditioning people for a desired response without them even knowing they're being manipulated. Look at Facebook. 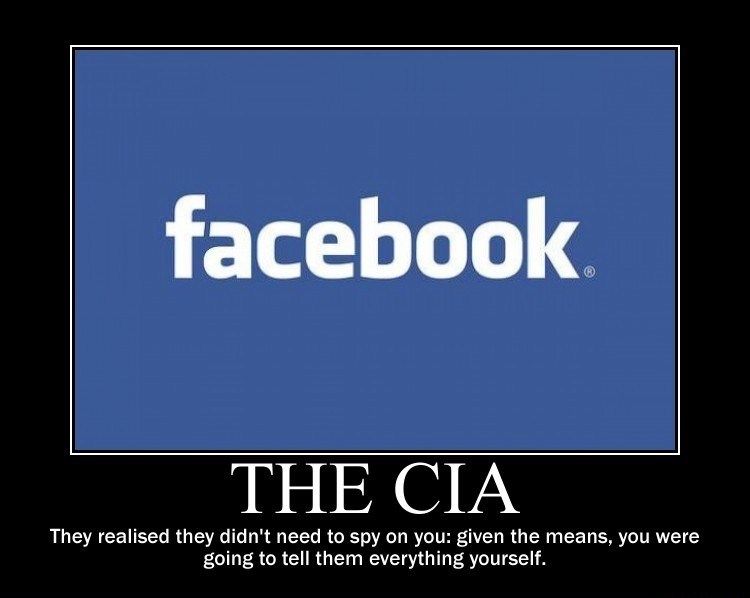 Cell phones are another fine example of people willingly spying on themselves and their friends what with GPS, cameras for video or recording, and oops the phone just turned on in my pocket all by itself.
Not exactly coincidence.

The next step is getting everyone to put all their information on "The Cloud", or "Cloud Computing". It's happening right now.
Another 10 years and consumer-level computers with hard drives for local storage will be a rarity.

Never underestimate the power of public programming and control.
Cloud computing will be nifty. It'll be convenient. Have access to all your stuff, all the time, anywhere, everywhere. How can you resist such a wonderful feature of convenience? Like that cell phone you carry? So very very convenient.

posted on Mar, 23 2013 @ 03:37 PM
link
Big data acquisition has poisoned the internet, remember when people used to watch clips online to avoid commercials? Put that power in the people's hands and they pollute their own entertainment with advertising.

For the ultimate in kneejerk reactions check out the "About the above network" section at the bottom of the page. Nothing is safe on the internet, especially not your ideas or opinions.

Originally posted by benrl
All this combined with advances in software facial recognition, the more advance technologies will only make it harder and harder to stay anonymous.

In order to be off grid will require people living like crazy mountain cave dwellers.

Ah, yes; you can thank the "Tagging" your friends feature on Facebook and other social media for advancements there. What better way to build up a public data mine of non-criminals while unpaid people willingly work for you for free to train your software?
Previous government facial recognition systems only held known criminals, military personnel, and other government workers requiring security clearances.

Your Government thanks you for willingly adding yourself and all your known associates to the database.

Op, the answers to this seem obvious to me, I dont know why others dont see it, and jusr say what can we do and xontinue on.

Companies are making billions a year selling your private info without paying you a single dime for it.

You wouldnt let someone steal your car and sell it and say oh well what do you do l, would you?

The only answer is data needs to be protected, similar to the way health records are, as it os your personal info, it belongs in no ones hands but yours, and may only be used with your permission every time it is acessed or used.


When you sign the release forms for the doctor to get and have access to your medical rexords he isnt allowed to disclose its contents about your conditions or any other data to anyone without your permission to do so.

Same doctor can however take all your personal info they ask for in their paperwork, and sell it to advertisers or anyone else they want for a profit, off you, without compensation or notifcation, and so can that company, and the company they sell it to, and the nextx and the next etc...

All data pertaining to a person shouk d be their sole proprietary property, and no contracts should be able to compell anyone to fulky disclose, or make available for furture use, any of their personal data.

posted on Mar, 23 2013 @ 04:11 PM
link
Is there some way to prevent your smartphone or tablet from broadcasting your location? Like those aluminum wallets that block RFID? Could I encase my tablet in something like that when I'm not using it?


Usually you can disable location services which gives a more exact location but if a battery is still present in the device it can still be pinged.


Usually you can disable location services which gives a more exact location but if a battery is still present in the device it can still be pinged.


Got it. I have location services turned off as a rule, but there's no way to take the battery out of my pad. At least, not without some technical skillz and effort. 👽

posted on Mar, 23 2013 @ 08:59 PM
link
You have to wonder how they're going to pay for all this sh!t. I guess the poppies in Afghanistan and the CIA black project money... 30000 drones alone would have to cost a fortune. The US has plenty of cash when it comes down to really important business I guess..... wtf ever, right?

Originally posted by colbyforce
You have to wonder how they're going to pay for all this sh!t. I guess the poppies in Afghanistan and the CIA black project money... 30000 drones alone would have to cost a fortune. The US has plenty of cash when it comes down to really important business I guess..... wtf ever, right?


It's simple, if the united states has the most oil and it sells it for about $100 per barrel and it consumes a modest amount of 20% of the world's daily oil consumption, that alone would make it over 6 trillion dollars.

Let's look at the justice system next!

If we have 10 million americans locked up with an annual government incarceration contract of 200,000 dollars per inmate, that would be over 2 trillion dollars annually.


Ohhh, we got money....too bad they never mention the interest rate we have on that 17 trillion we owe....


Great Thread. So There you have it.... Total Information Awareness in Data storage form.

So, I would suggest that if you are an inventor,novelist,screenwriter,poet,etc.,
It might be more secure/profitable for you as an individual producer to be discreet
with your methods.

Next time you download an "App" from the Google Play Store, before you continue to "Accept & Download", have a look at modifications and conditions involved in the download...

I have no doubt that TPTB are gathering information off us about social behaviour from our Smart-Phones...

Even the most simple and basic app has the ability to access and share sensitive information from your phone...

In fact, I was looking a certain App earlier today (can't remember which) and before I proceeded with the download, part of the modifications included being able to access my camera, to the point where, if i even switched it on, the App was able to capture the image on the camera without me having to actually take a picture!

posted on Mar, 23 2013 @ 10:19 PM
link
Speaking for myself personally, there comes a time when you learn all of these things, about what's going on in the world...see the direction things are headed, and you don't really care anymore. I mean, you do care, you still wish it could go in a better direction; better for the majority. But, you realise it makes no difference holding on to the ideal of changing it. You do what little you can to help yourself and those around you, continue to educate yourself...and sit upon that knowledge, not doing anything with it really. Sharing it doesn't make much of a difference, as it's like preaching to the choir. The ones who care to listen, already think they same way. The ones who don't, never will in this life time. And the ones you thought you changed, were already predisposed to changing, and just needed a beacon of light that you provided. If you didn't provide it, someone else will.

So, I simply try to live positive. Stopped getting angry at the other stuff I have no control over. Turned off the TV and radio, make happy memories and help as many people as I can along my journey here. Because, in the end, a wealth of knowledge that cannot be used...is...essentially useless. So I use what I can.

posted on Mar, 23 2013 @ 10:23 PM
link
So why are there no ignorant, pedantic, mouth-breathing, pro-govt, skeptic, sheeple telling us that this isnt happening and it doesnt exist?

I have left the continent twice in the last 90 days... and not one shred of evidence of it anywhere...Or was I where all of the mobile devices assigned to me and surveillance indicated that I was?

With some skills, a need for secrecy and a little help their perfect system can be not only evaded, but used as good cover.


Well HelllllOOOOOO,
That is why they are called "Smart" Phones.
We know MORE about you than You do about your yourself.

So if you are "Naughty Naughty", we are going to "Catchy Catchy".

So Stay Paranoid and on your best behavior.


And you don't have any problem with the Government's blatant intrusiveness?

I don't think the problem is people being "naughty" so they "catch" us (TPTB don't care about insignificant actions of sheep..).

It's about them STUDYING US as part of their experiments to progress with their Predictive Programming techniques.


Nonsense, that is only One sector of Statisticians in the wing.
Predictive Behavior Dept.

There is a lot more going on than that.
Intelligence Capabilities.
Situational Awareness.
Crime Scene Replay.
Potential Recruits.

And of course the general populace "fear factor".
The technology is literally 60 year ahead of what you can have access to.

Just to get down to brass tacks, the term "Sheeple" is a misnomer.
For Genius is where you find it.
Do not insult me by underestimating yourself or the members here.
I know it is "Invisible" but have faith.

Maybe you should consider that in some strange way, we've got your back.
That is unless you give us a reason not to. Hence the term naughty,naughty.