Ken Wilman was walking his dog Madge in the coastal town of Morecambe in northwest England when she began "poking at a rather large stone" with a waxy texture and yellowish colour. At first he left it on the beach but later retrieved the object, which he believes is a piece of ambergris, a substance found in the digestive systems of sperm whales.

Whales sometimes spew up ambergris, which floats on water and has been highly prized for centuries. It is used in perfume-making for the musky fragrance it acquires as it ages - but newer ambergris is foul-smelling.

He picked it up and smelled it, put it back down again and thought 'urgh'," Wilman told the BBC on Thursday.

"It has a musky smell but the more you smell it the nicer the smell becomes."

The tests results are not in as of yet, but if it proves to be ambergris, it is worth a lot. It's a very important base for perfumes and it's hard to find any artificial substitute for it.

As disgusting as this sounds, the substance is actually in demand with perfume makers as it helps prolong the scent of perfume. That's why a pound of the whale waste sells for as much as $10,000.

That is one extraordinary find.
Priceless vomit.....

Vomit hunting any one?!?!

lucky guy, i guess. i could be so lucky, but when i find vomit its usually human and still in liquid form.

posted on Feb, 1 2013 @ 04:56 AM
link
Wow, you would be stoked finding that and deciding to hang on to it. Almost an exact same valued "vomit" was found by a kid here in New Zealand last year. 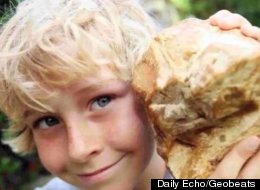 posted on Feb, 1 2013 @ 05:02 AM
link
I always thought Ambergris was a word made up in Futurama, until I learnt it was real and highly valuable.
What a lucky man! Haha.
Priceless puke.
Better get my wellies on and head for the beach... To Er... Walk my dog?

Better get my wellies on and head for the beach... To Er... Walk my dog?


Dog or no dog, my butt would be going for walks every day.

posted on Feb, 1 2013 @ 06:11 AM
link
Yeah, it is a fixative.
Civetone comes from Civet glands and might be considered pretty disgusting too.

posted on Feb, 1 2013 @ 10:04 AM
link
reply to post by snarky412
Eeeeeeewww! I think you just ruined perfume for me forever snarky! If I had a clue that there was possibly any kind of vomit involved I assure you I would have never worn any....EVER! Now excuse me while I go decontaminate myself!

posted on Feb, 1 2013 @ 10:10 AM
link
What kind of world have we created that makes a chunk of whale vomit worth so much. I cannot see paying for a perfume that is made of this, I don't care what pheromones it has. I can't stand the smell of those perfumes and colognes. I can't understand how anyone could. Maybe by putting whale vomit on your neck it brings up confidence because nobody will challenge you because you smell so bad. I see that people control others with these smells because they are allergic to the smells and don't challenge them. This doesn't work with people who smoke though because they can't smell. It's all a game of alchemy I guess.

So does this perfume attract women and men that look like whales?
edit on 1-2-2013 by rickymouse because: (no reason given)

Not sure when I'll be back.

Originally posted by littled16
reply to post by snarky412
Eeeeeeewww! I think you just ruined perfume for me forever snarky! If I had a clue that there was possibly any kind of vomit involved I assure you I would have never worn any....EVER! Now excuse me while I go decontaminate myself!


I'm sure many of us have worn vomit at one time or another.

posted on Feb, 1 2013 @ 01:09 PM
link
Performer is an old, complex art. Today a lot of synthetics are used. Drakkar Noir has synthetic ambergis.

I am fascinated by scents. I keep many, many around ..perfumes and essential oils.

I like to be able to I'd what anyone is wearing. It is a quirk.

It has been said that all beautiful complex fragrances have a vague note of something more unpleasant...ie musk, leather, tobacco.
I would love to smell pure ambergis.
edit on 1-2-2013 by hadriana because: darn phone..i try...