How to can BACON

So this weekend I decided to give it a try.
All you need to get started is the bacon, wide mouth quart jars and heavy paper like butcher paper, without the plastic side. Oh, and the pressure cooker of course.

So, our bacon is pretty thick, it came from the butcher, not the grocery store.
Lay out a sheet of the butcher paper, about 2 foot wide.
Lay your bacon on the paper, and cover it with another sheet of the paper. (With this type of bacon, you won't want to go more than 8 slices wide, or it won't fit in the jar.
Trim all the excess paper around the bacon.
Grab a yard stick, or something similar, and fold the bacon/paper in half, lengthwise.
Now, starting from one side, roll the bacon/paper as tight as you can, and put it in the jar.
Once I have 7 jars done, I load them in the canner. Do NOT add water to the jars!
The blog did not mention that if your like me and add extra water to a pressure cooker, just to be cautious, your jars are going to float!
So, I took out a bit, had enough to reach about 2 inches from the top of the jar, they were still leaning a bit, but that was ok.
So, sealed up the cooker, processed the jars for 90 minutes at 10 lbs. and waited for them to cool.
Here is what the jars will look like when done. 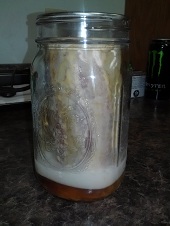 So, the big question, how does it taste?
I decided to bring a jar into work and fry it up. They are all bacon fanatics.
Here it is coming out of the jar.

It is coming apart a bit.

So, I fry it up. It only takes about 2 minutes per side, if you don't want it super crispy.

And here is the finished product.

So, first, we tried it right out of the jar. Doesn't really taste like bacon, more like smokey ham. Not bad, but not bacon!!!!

Well, everyone liked it cooked. I would give it an 8 out of 10. There was about 1/4 to 1/2 inch of juice in the jar below the grease line, so I think that may have taken away some of the flavor. The whole office still smells like bacon, which makes people happy.

I will definitely be canning more. I don't want to lose 2 pigs worth of bacon if we lose power, which happens a lot in the spring, which is why I can so much.
I am pleasantly surprised bacon turned out well canning, and hope you are as well!


That is awesome Chiefsmom. TY for showing us how to do this. I'm buying a side of beef this week, and a whole small porker...will come in very handy. I'd never thought of canning bacon. I learn something new everyday...thanks!

The first two pictures had me grossed out, but it looks like it turned out just fine!


That's another reason I decided to try it. Had to clear out the freezer for the whole cow next week. I'll be canning most of that, except the steaks...mmm.
I'm out of canned taco meat!!!!


Yeah, it isn't very pretty, that's for sure.
And the paper will fall apart while removing the bacon.
But it is worth it, when done!

posted on Dec, 10 2012 @ 12:51 PM
link
That is awesome!! I would have never guessed, but it is a similar concept to canning salmon.
Anything to make more space in the freezer too! We are actually going to make a batch after Christmas, I might have to pull the canning gear back out.


I would be interested in your way of canning salmon! That's the only thing I haven't tried. I can't get anyone to bring me some, or take me with them.


It's done just like you explained the bacon, without the paper.
I learned the hard way that you only smoke it about half way through!
Place your pieces of fish in a jar and pressure cook, 15 lbs for 90 minutes.
I sometimes add jalapenos or pineapple for a teriyaki flavor.


My parents go to Alaska every year for a few months to fish. I have so much canned salmon in the basement.....If I'm not mistaken I have 20 cases right now. Anyway, the point of my response is to tell you how she cans hers. Pretty simple, just slice it up, throw it in the jars with a pinch of salt, seal it and cook for 90 min at 10lbs. The stuff is great....well the first few cases lol. I have to give alot of it away to friends.

posted on Dec, 11 2012 @ 05:48 AM
link
I would never even consider canning bacon. It just doesn't last long enough in my house to bother. By the time i got to the sterilization in the pressure cooker it would be all gone anyway.

The WalMart by me sells a three pound package of bacon ends and pieces for a little under $4.00 when it is on sale. It doesn't look as pretty as the "good stuff" but I can't see it with my taste buds anyway. I find it perfect for cooking too. I will make three pounds of black eye peas and use the whole three pounds of bacon in them along with three medium to large onions chopped coarse and spices to taste. When I make this and bring it as a pass around dish for our Sunday fellowship lunch after service there is never any left to take back home so if I want any for later I have to set some aside and leave it home.


Thank you! Now I just have to get my hands on some!


Thank you for the reply, even if you are bragging about all that tasty salmon!


Sorry, just caught your question.
I would think, like other meats, canned properly, it would last at least a few years this way. I've eaten beef I canned from 4 years old. It tastes the same, but I've read that you may loose some of the nutritional value after a few years.
I have a feeling, being bacon, it would never make it on the shelf that long.