posted on Nov, 29 2012 @ 08:36 PM
link
Here's what we know could happen according to most of the evidence gathered from the world's purest news source, ATS.

Sorry I didn't link to each and every article that we've all read and possibly wrote several times all ready. Here is a re-cap and I just want to be extra double sure that I'm not missing any possibilities.


I
- We're going to elevate our everything into some kind of new dimensional plain where we begin to see beings from other dimensions that have always been there but we just couldn't see them.


II
- Planet Nibiru is going to smack right into us at high speed and create a crater the size of the Northern Hemisphere. The debris, dust and tidal waves, not to mention the impact alone will annihilate most forms of life except for a few sections of survivor species (roaches, rats and humans).


III
-Project Blue Beam will be implemented most likely with the "fake alien invasion mode" on. The world, with help from the governments and the MSM will believe that this invasion is real (even if secretly they don't). The world will be officially plunged into a 1984 situation, where towns and cities are isolated from one another and each city is living in fear for their lives as this "fake" war of smoke and mirrors rage throughout the backdrop.


V
-The planet Earth, along with it's galaxy The Milky Way, are going to pass through the inter-galactic whatever that it does every 2,600 years or so. This will cause catastrophic world-wide destruction ranging from massive earthquakes, tsunamis, volcanic eruptions and total plate and crust displacement. Pole shift possible. See Mayan calendar.


VI
-The collective thoughts and mental energy of the combined human race, thinking and dwelling on 2012 will cause a massive disturbance in the web of "now" that engulfs our real-time planetary frame that our inner sparks travel in our bodies through. This will cause unknown amounts of destruction. Earthquakes, etc...


VII
-TPTB use the mega fear factor unleashed on the masses to pull a series of false flags thus kicking off the official beginning of WWIII. This could happen with supposed attacks by, Iran, Israel, Syria, North Korea, China, etc....


VIII
-TPTB use a series of false flags to demonstrate terrorist groups from rural areas of the US. They will be shown as "patriot" type people that feed into the end of the world theories coupled with the idea that America is becoming socialized. These "terrorist" groups will cause massive damage to our infrastructure and the war on terror will officially enter our front yards. Police State moves in, guns are to be turned in, if you still have them then you're one of them.


IX
-Aliens invade our planet to save us from all of the above by ending their experiment gone a stray once and for all.


XI
-TPTB use weather warfare (HAARP) and things to create the most destructive weather ever imaginable. This all to raise taxes to a beyond slavery level and keep most homeless or living in FEMA camps until they are killed.


XII
-We will lose time when we enter the galactic mile marker precession whatnot and the Earth will wobble and be cast into confusion.


XIII
-The inhabitants of the Inner Hollow Earth will rise up with their Nazi allies and posing as UFO ships, they will attack the world. TPTB know of this plan and have signed on to the extermination plan. Underground cities for the super elite have been constructed and await them for when the Nazi UFO armada "cleanse" the world of 95% of the population.


XV
-The sun will cause massive widespread damage to all of Earth's electrical power structures through a series of mega powered solar flares. This solar attack will blow all of the transformers and main control facilities command centers world-wide. This will plunge mankind into instant chaos and panic. The world's 300 or so nuclear power plants, spread evenly across our surface, will have roughly 72 hours of back up battery power before they go into meltdown. The only way to keep them powered with the electricity out would be with diesel generators. These generators will require a constant supply of diesel trucks carrying fuel to the plants. With a total blackout chaos situation on hand, it will be sometimes difficult to get the diesel to the plants. This could also be crippled by the obvious lack of fuel coming in from overseas or pipelines, due to lack of power and infrastructure added to world wide panic.


Are we missing any 2012 possibilities? 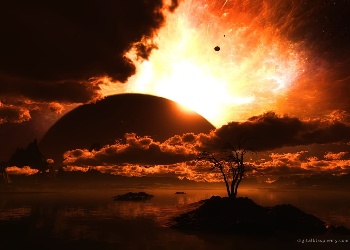 
Right. I should have added that one.
Thanks, I'll add it if I can.

I REALLY REALLY want [I] & [V] to happen but then again that's my own personal wishful thinking...oh world

- Nibiru will come crashing down in the eastern pacific, or so we think.... It will end up hitting Fukushima Daiichi nuclear power plant, Japan will be wiped out along with most of the western hemisphere, leaving only eastern Canada and Australia to carry on.


True and thanks for the update. I guess you could move the location from Plan II to the Pacific instead of the Northern Hemisphere.

Thanks, good idea.
However, just refer to Plan III and swap Aliens with Xenu Scientology Warriors and it should work out OK.

Originally posted by KentuckyMan
Old age isnt on there?
Im gonna die of old age or maybe during sex at age 60 idk yet

Plan IV has your plan.

I would choose the first one. Except it's not really dying, it's ascending.

We leave our current bodies, and our souls go to a higher place.

Something amazing is going to happen.


Yeah, slightly more than half of me wants Plan I. I guess that's why it was the first one I thought of when I was writing this. The other hand however sees Plan VI as being plausible.
edit on 29-11-2012 by DrGod because: (no reason given)


100% of me wants the Earth and all of her inhabitants to ascend to a higher plane of existence.

Anything is possible, but I am being extraordinarily hopeful that something amazing will happen on that day.

It will all be ok.

Originally posted by dreamfox1
The one missed.....

Good one. I don't know how I forgot that one.
I added it. It's now Plan XV

I was thinking it was going to be revealed Bieber is really a girl leading to mass hysteria from all the teen girls and catholic priests.

Option IV, I really don't think anything out of the ordinary will happen that day. It will just be another day. Maybe some of the other options will happen later ...

You forgot the Pope is supposed to be replaced by the anitchrist... or something??

Super volcanos..... do not forget.