Armored Core Mechs Soon to be a reality?

posted on Nov, 28 2012 @ 12:17 PM
link
Well well well. This is a interesting development for a proof of concept. Maybe Darpa could take a interest in this as its not to expensive to produce merely 1.3 million a piece as it stands. Yes the drive train would have to be improved as well as increasing speed. Depleted uranium/choblaim armor and high response hydraulics or Fly by wire control. Give it a radar and jamming combination unit. Equip it with recoiless rifle in its right hand and small hellfire missile pod on the other side. It could make a excellent armored scout.

The above is the Link. Please share your thoughts and improvements that could be made to the base unit.


yeah I love these things.

I say build them as ground support. Make them partially areal in nature, and give them all the support roles that ground troops need to call in.


As cool as Kuratas looks, it isn’t a killing machine. The mecha has weapons, such as a LOHAS launcher that can shoot filled water bottles at a target albeit inaccurately, and twin Gatling guns that track an fire off 6,000 BBs a minute that can be triggered by the pilot smiling, part of a tracking system that is aptly named the “Smile Shot”.

I remember seeing this some time ago. It's more of a expensive toy.

None the less, I love the concept and it looks awesome. I have always thought the future of combat would be waged by people inclosed in suits of armour. We have use it for centuries. This would be the next logical step


That thing is a big walking target.
In a military application it would get hit by RPG's so fast it would be out of commission before the first shot was fired.

It's cool as hell. But needs some thought before being put into action.


I like your weaponry suggestions because the current waterbottle launcher is more than a joke. I loved the quote in the video.."occasionally it will hit its target".

And yes, a few RPG's and that thing would be a pile of smoking metal. If it could run, jump and manuver faster than a human -- I might see it. It would have to be made smaller and have really beefy armor.

Despite how much I love Blue Gender and other animes that use these types of things, they are just not practical in a asymetrical war.

I see slim fitting exo-skeletons that "enahnce" a soldier before something like that is used in warfare.

Originally posted by Infi8nity
Look under the photo it says its a artistic prototype.

I stated that in my OP if i am not mistaken. Artistic Proof of concept. Yeah It would be a target UNLESS it could have a avoidance reaction to incoming projectiles. Something similar to a auto pilot that kicks in temporarily to move it out of the way. ANd Give it some ability to see behind walls with infra red or something. Sees a terrorist behind a wall just use the recoiless rifle to blow them away. It will not see the battlefield just yet,but it is a good test bed. It is basically a giant Exo suit though.

posted on Nov, 28 2012 @ 10:56 PM
link
I highly doubt whether suits like this will ever have a place on the modern battlefield for a whole myriad of reasons the biggest of which is the fact that unmanned systems can be made to be smaller cheaper, faster, and more effective.

If you'll reference an old thread in the weaponry forum on this site entitled "why not mobile suits" or something along those lines you will see a concept laid out by member ch1446 for a "killer kitty" combat robot which I think is much more likely to represent the ultimate direction mechanized systems are heading.

Now here's a short list of some of the problems with designing a fighting robot in humanoid or quasi humanoid form.
1. Height: Have you ever read about tank design and how they have spent billions of dollars trying to make tanks with the smallest vertical signature they can? This is because on the modern battlefield and even moreso on the battlefield of tomorrow if you can see something you can probably hit it!

2. Armor: In order to have a useful mech you'd have to have a heavily armored mech. Where you run into trouble with this is the fact that by the very nature of the form factor you are proposing your mass efficiency of armor is going to be abysmal! What this means is in order to gain X level of protection over Y% of the vehicle you will have to use much more armor than a comparable tank or other conventional vehicle. So now you have a system that by it's very nature needs to be heavily armored but by it's nature requires significantly more armor to guarantee a given level of protection.

3. Ground pressure: This is the real killer of any combat mecha being successful IMHO. What i am referring to is the fact that in order for your mecha to get around here on the planet earth effectively you will have to increase the surface area of it's point of contact with the ground to give it a comparable Pounds per square inch rating of a modern battle tank in order for it to be effective. Otherwise you will have a giant hulking system that breaks through the roads it tries to drive on, sinks into the dirt rather than traversing over it, and generally has to expend massive amounts of energy to dig itself out of the holes it punches in the ground every time it moves.

Now if we're talking about exoskeletons or small combat robots or drones... I see all of those as indispensable in future warfare, but the giant armored suit is just not viable and probably never will be.

posted on Nov, 28 2012 @ 10:58 PM
link
Too much power maybe? Wouldn't take much for a rogue soldier to utterly decimate areas of cities if we're talking full on sized mechas the size of sky scrapers.

Just looked at the link and i can honestly from the costs, it's probably not gonna sport over fast movement with only 1.3 being put into it.
edit on 28/11/12 by IntoxicatingMadness because: (no reason given)

posted on Nov, 29 2012 @ 10:19 AM
link
I forsee or would like there to be power armour like in halo that the master chief wears with regenerative shields hopefully thats not too much to hope for

posted on Nov, 29 2012 @ 11:12 AM
link
Mechwarrior x21 the next step in darpa toys, give it the full weaponry it needs, M61 Gatling gun, 4 tube tow launcher, FLIR and armor to with stand a RPG hit, and a arm shield, this could be made to with stand a 125 mm round, this could be of reactive armor link to the type of armor defense-update.com... and this armor defense-update.com... could be the main body armor, 30mm rounds would just bounce off.


It would be pretty cool if they were.


Allright. Thanks for all the input. OK onto the height issue.

Seeing as how it is a quadra ped robot that a person can ride in and control. Judging from the hydrailics it looks as though it could be height adjusted. It can go as low as a tanks height if adjusted properly.

Armor is another issue of course. Explosive reactive armor could serve to be a alternative to heavy DU or carbon nanotube weaves and or kevlar and steel. Give it disposable drones to scout its path ahead in high threat environs as well.

Pressure on the ground could be reduced mayby with aerogel in the tires . But it could be avoided if given a tank like bottom reducing the cost,and lowering the amount of crew needed to 1 instead of a abrams using 3 people.


In all seriousness though I do not see this on a battle field in the near future. we need some more tech leaps first.

The exo suit DARPA has is the way it is going and it will become armored soon enough.

posted on Nov, 29 2012 @ 01:40 PM
link
think this was posted like 8 months back,i think the mech at best comes with airsoft machine guns and looking at it i dont think it could support real weapons due to recoil and mostlikely a complete lack of armour so unles your hoping the enemy wil just be scared of such a thing as it sits its not too deadly looking but give it ten years and we should have something like this on the battlefeild.

Originally posted by RalagaNarHallas
think this was posted like 8 months back,i think the mech at best comes with airsoft machine guns and looking at it i dont think it could support real weapons due to recoil and mostlikely a complete lack of armour so unles your hoping the enemy wil just be scared of such a thing as it sits its not too deadly looking but give it ten years and we should have something like this on the battlefeild.

One word. RECOILESS RIFLES. I posted that as part of my original post. Yeah recoil is a huge killer.

posted on Dec, 2 2012 @ 08:08 PM
link
I love the idea of " Mechs" but sadly for the time being and the foreseeable future, tanks and low profile armor will continue to dominate on the plains and deserts....

The only effective scenario I can think of for an armored suit would be urban combat.

The light UrbanMech is designed for just what its name suggests, urban combat and defense. 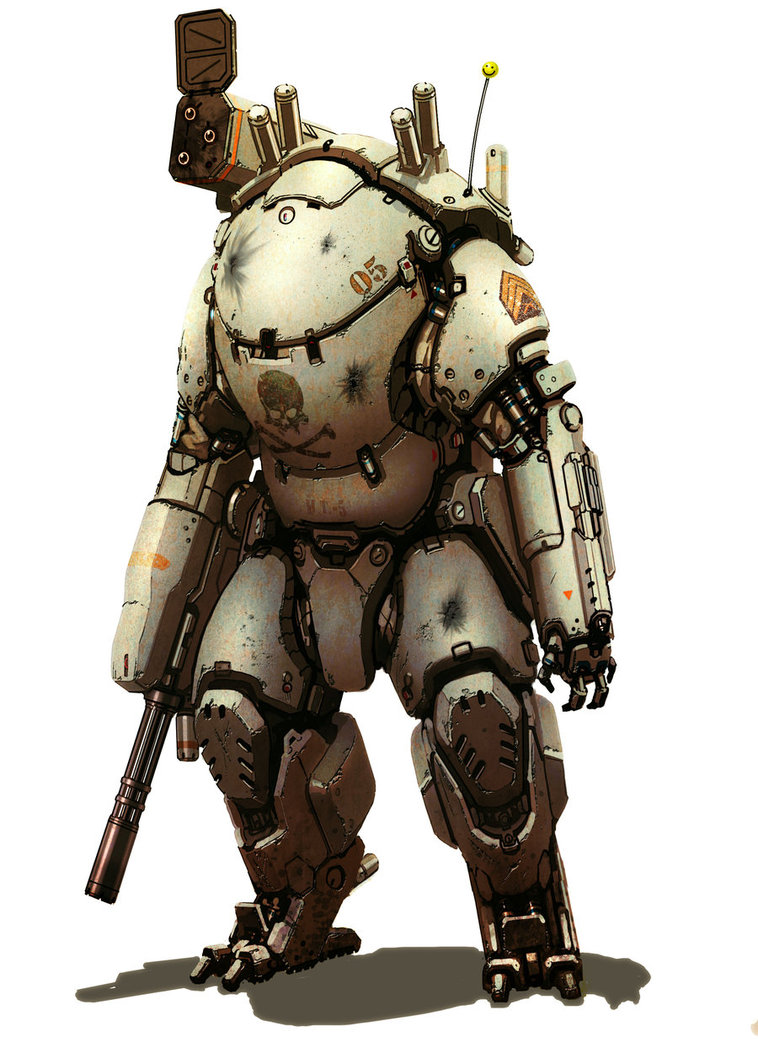 The UrbanMech packs a powerful punch for its size. The standard version carries an Imperator-B Autocannon/10 in its right arm and as a back up weapon it carries a Harmon Light Small Laser in the left arm. With these two weapons the UrbanMech can constantly harass, or if piloted by an experienced enough MechWarrior, down 'Mechs up to twice its own size. 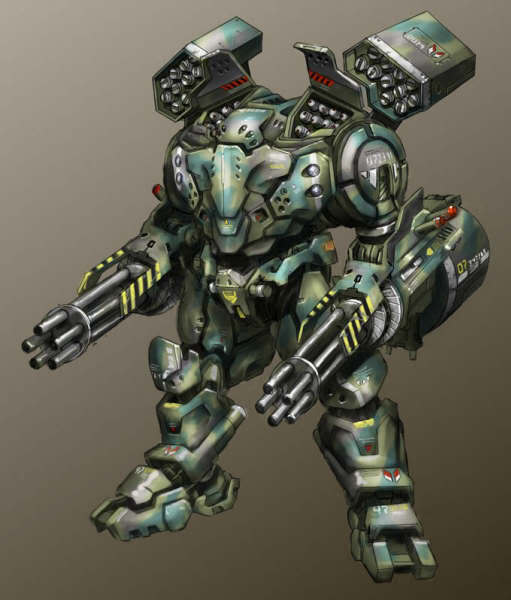 The primary weapon on the Hunchback is a Tomodzuru Autocannon Mount Type 20 which can strip one and a quarter tons of armor off an enemy 'Mech in a single blow. This is paired with two Ichiba 2000 Medium Lasers and a Diverse Optics Type 10 Small Laser. All of the weapons carried by the Hunchback make it a devastating opponent at close range.