posted on Oct, 11 2012 @ 04:01 AM
link
New Recruit Experiences at the Illuminati Training Facility

The solitary dirt road stretched out across the gentle hills like dark velvet ribbon in the pale moon’s light as a black windowless van careened through the night. In the back three nervous recruits sat staring straight ahead, nervously wondering what fate held in store for them…

In the socio-political climate that followed Obama’s second term, even the Illuminati were finding it hard to find locate members to carry out the necessary duties required to control global affairs. People with little worldly connections, an IQ over 95 AND an implicit trust in the government were becoming as rare as hen’s teeth.

After careful of screening many candidates, Colonel Rogers of the ‘Civil Acquisition’ Department finally settled on three from the latest recruitment drive. Albert Spoonheim was a former Google executive and founder of the committee which instigated Google’s hidden Chuck Norris jokes. Beside him sat Professor Magda McNarry, member of the IPCC who briefly climbed into the academic spotlight with her PHD demonstrating a correlation between global peaks in anthropogenic CO2 and Oprah’s Giveaway shows. To her left hunched a pimply faced teen with a long greasy fringe covering his eyes. Known only as Sploot, he once held the record on Icanhazcheezburger.com for number of cat memes started in a calendar year. Sploot also was a forum moderator on 4chan and was rumoured to have discovered the Higgs Boson using just a laser pointer, a needle and the reflected light waves off a ‘Dark Side of the Moon’ poster on the wall of his Mom’s basement.

In the distance an old fashioned rundown service station loomed on the horizon. The van pulled around the back and Colonel Rogers ordered the three to get out.

“This is it….? Why are we here?” demanded Sploot

“Unbeknownst to most, the Rockefellers’ main source of wealth is cheese, specifically those rubber cheese slice things. They’ve had the market cornered for nigh on 5 decades now. Wisconsin just seemed like the logical choice. Think about it; would you suspect the headquarters of the entire global shadow government was here…….?

He looked at each one of them consecutively as they blankly stared back.

“Exactly. Plus both the Hapsburgs and the Rothchilds have a weird thing for cows. We don’t ask too many questions…”

“No, what are we doing here, at this gas station.”

‘Oh… just wait and see. You’re gonna love this” replied the Colonel with a wink. 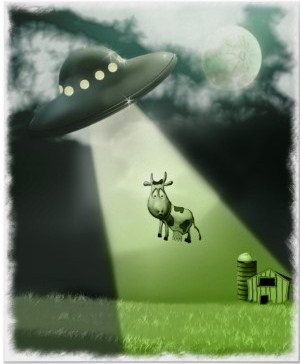 The group entered through a side door. Behind the counter sat a middle aged woman with a deeply lined face and disenchanted stare. A cigarette hung precariously from one corner of her mouth and her thinning peroxide blonde hair hung languidly around her face. She barely acknowledged the group as they bundled into the shop.

“Colonel” she unenthusiastically replied in a deep husky voice.”

“Really Mimi, how long have we known each other?”

“Password” she replied turning back to the small TV set on the wall above the counter which blared out a rerun of ‘Jersey Shore’ season 1. “Oh that Snooky, she’s just hilarious”.

“Very well. What is it this month I wonder…”

The Colonel pressed a button on his watch and a Lady Gaga song blared out from the watch’s tiny little speaker.

“Oh okay, let me think. Um… let’s have some fun, this beat is um sic.; Err…I wanna take a ride on your disco stick”

She then sat upright and pushed three buttons on the cash register before pushing herself away from the counter. After two seconds a faint clicking sound was heard from beneath the floor. Suddenly the counter began to sink and the shelves behind the counter started sliding sideways. Behind them was a door of what appeared to be solid gold framed by two alabaster pillars. Above it was the All Seeing Eye surrounded by a radiant sunburst pattern. Colonel Roger pushed the door open and ushered the new recruits through.

He turned back to Mimi and went to pinch her ass.

“Don’t even think about Colonel.” She slapped back and her eyes narrowed… sideways… before her second eyelid flashed across their surface.

The steel doors silently slid open revealing a room of total of total darkness. The recruits stepped forth as Colonel Rogers flicked on a switch next to the entrance activating a row of lights which flicked on one at a time down the chamber revealing a vast underground room.

As their eyes adjusted to the brightness they saw along each wall a long series of humanoid forms within specially designed cavities set into the wall. Each of the forms appeared to be asleep and had a series of wires plugged into their various orifices.

“This section here is where our presidential droids are stored. Spoonheim, you’ll be working on the Obamabot 2.0”

“You mean to say they’ve all just been just been robots?”

“All the way back to Nixon. He was our beta test version. Obviously there were a lot of flaws back then but we like to think we’ve ironed most of them out.” 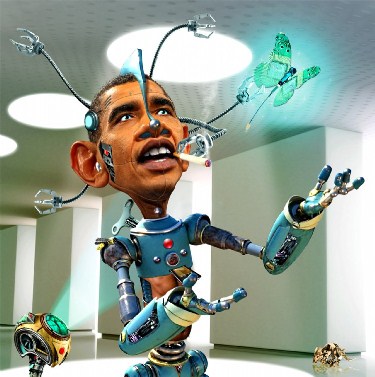 “And no ones’ ever suspected a thing?”

“We had a few issues with the Clinton 500 model. Ended up leaking hydraulic fluid all over one of the interns. Thankfully we managed to swap dresses for one of Nancy’s old frocks while she was busy flossing her teeth.

“Yes they did. Took us completely by surprise. Guess she couldn’t ‘just say no’ either. Turned out to be quite an embarrassing affair actually. To tell you the truth we didn’t think anyone would actually find the in-unit groinal touch screen interface. That’s the last time we’re ever going to include ‘swag’ in our presidential bot’s personality traits.

So I am I going to build these…?

You’re not going to build this, someone else is going to make it happen!!! Tell me Spoonheim, did you ever have a great teacher in your life, use a road or a bridge…?”

“Sorry, not sure where that came from. Your job will basically be to ensure Obama’s transition to iOS6 operating systems runs smoothly…”

That’s right. Apple has been actively supporting our depopulation efforts in China for quite a while now. We were using just plain old Safari but with the new smart phone capabilities we can now send information or new orders instantly in app form. Instagram was actually our first attempt at creating bot visualization software. Got a little weird though when the pics started surfacing on facebook so we simply added in vintage filter capabilities, sold it to Zuckerberg and now our entire program is funded by hipsters”

“Originally we were using Explorer but the information transfer was beginning to run way too slow. Remember George Bush…?”

“Magda, this is where you’ll be stationed. The ‘Counter Global Cooling’ Department.”

“No no, global cooling. Turns out the skeptics were right all along. The world has actually entered a period of global cooling. We’re been burning everything with even a sniff of carbon in it just to keep the damn place warm.”

“The Overlords don’t like it too chilly, what with their cold blood an’ all. Gets kinda tricky keeping up the holograms when all they really feel like doing is digging a snow cave and hibernating. Why just the other week we had this incident with the Nicky Minaj…"

“Is that the Duchess of Cambridge…?” demanded Professor McNarry

No we’ve got our intel on her. It’s her um sister… eh ehm… must be crossed channels with ‘Global Monitoring” replied the Colonel hastily as he fidgeted with some buttons on the control panel. The screen flashed twice before the image was replaced with that of the Earth spinning as seen from 100 miles above.

The recruits entered another room of near wall to wall screens. But these screens showed flashing images of popular singers, movie stars, as well as graphs displaying such information major world event vs. public interest and others such as current internet memes vs. youth apathy levels.

“At the moment we’re just gonna have you monitoring a few conspiracy forums. Following the Obama’s earth shattering second election where NOTHING CHANGED your job just got a lot easier. Now all we do to keep them distracted is change the colours on the main page every month or so or post a thread in ‘Fragile Earth’ displaying the latest prize winners of some macro photography competition. If things get too heated we’ve always got a few YouTube montages we can post. On this screen we’re just attempting to get the right ratio of Third Reich/city rat race footage and baby/universe fadeouts to balance out the Carl Sagan quotes in our latest clip.”

“Sounds easy enough” said Sploot, busy taking it all in.

“This month I think we’ll change the new ‘quick menu’ to the right hand side of the screen and start another ‘global energy shift’ thread. We might even finally release that ATS app for smart phones…”

Colonel Rogers looked ahead up the passage way to see all three recruits limping along uncomfortably while holding on to their backsides.

“Oh… did I miss your initiation…?”

“Initiation!? But why the probes? And what’s with the electrodes?” cried Spoonheim.

“Probes…? Electrodes...? Why that was just your medical. They’re thorough...”

“Nevermind… nothing. As you were." 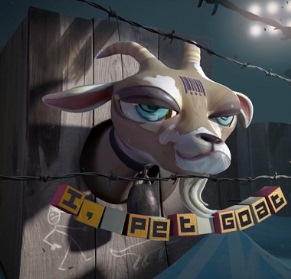 posted on Oct, 12 2012 @ 06:16 AM
link
Lol either not many people share my slightly tangential sense of humour (most likely) or there actually is an Illuminati plot conspiring against this thread (unlikely but not entirely impossible...).

At any rate cheers to the few mystery flaggers.


“Exactly. Plus both the Hapsburgs and the Rothchilds have a weird thing for cows. We don’t ask too many questions…”

We had a few issues with the Clinton 500 model. Ended up leaking hydraulic fluid all over one of the interns.