page: 1
112
<<   2  3  4 >>
log in
join
share:
Kantzveldt
+73 more
posted on Sep, 11 2012 @ 10:20 AM
link
The dating of the earliest level of Gunung Padang in Java to 10,000 Bc catches the attention, whilst it is being claimed on such evidence as the oldest and most extensive megalithic site worldwide, it interests me more in that it would be around contemporary with the early Neolithic period in Anatolia.


The site has been mentioned in terms of being an actual constructed pyramid, but that seems highly unlikely, though it has been terraced and the megalithics were placed on such upper terraces, with a staircase of Andesite blocks leading to these.

The team that has given the dating has also scanned for internal chambers within the mount, saying there is strong evidence to suggest such, and contemplating the possible hidden wonders within.

It's probably early days on understanding the site, but the dating is remarkable, i sourced who was responsible for the claims, unfortunately Google translate... 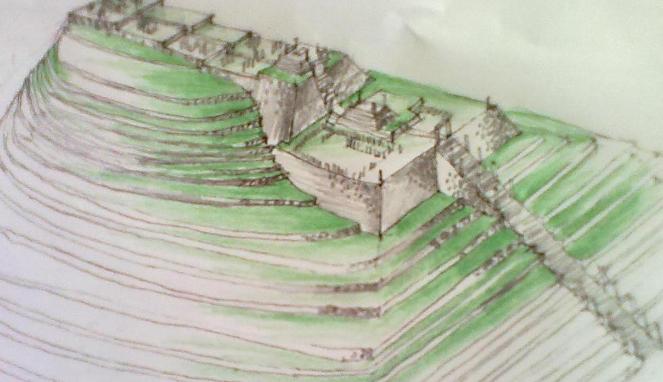 All the literature and unpublished artifacts around the world about 3000 years old civilization maximum BC. Carbon tests Gunung Padang break it. Gunung Padang maximum recorded age 10,000 years BC," he told VIVAnews, Saturday, June 23, 2012.

Drilling results from samples taken from the terrace of 5 in drill point 2 with a depth of 8 to 10 meters, the results show 11 060 yrs + / - 140 years Before Present. "If you converted to calendar age equivalent to 10 thousand BC," said Boedianto, in a written statement received by VIVAnews, March 4, 2012. 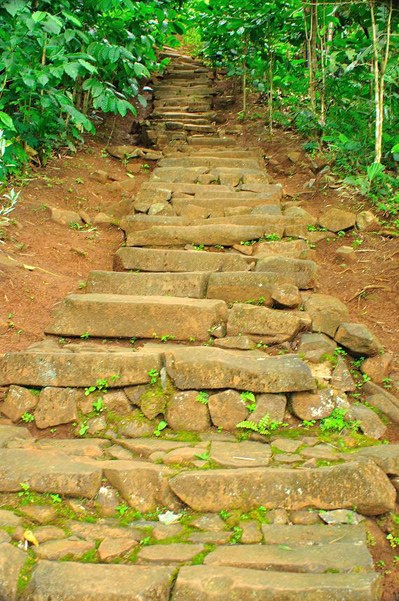 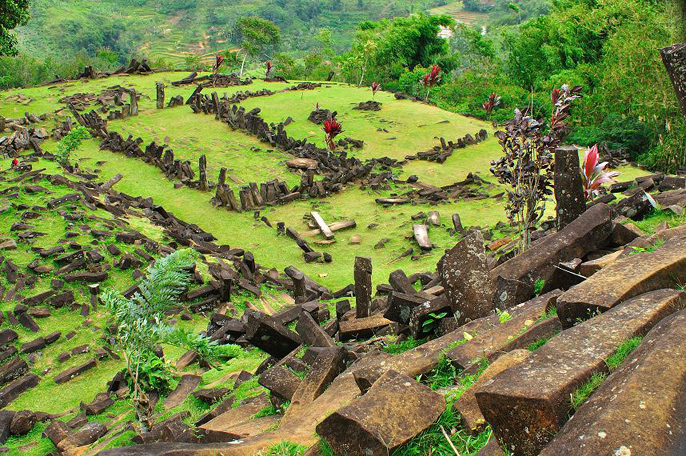 He added that this is not a job and without literacy. Dani says this is one proof of the thinking and research of Professor Stephen Oppenheimer famous for his work "Eden in the East."

"In the book it is mentioned that Indonesia as a center of advanced civilization in the era 10,000 years BC. This is a cycle that must be proved, such as the disappearance of dinosaurs from the earth," he said. 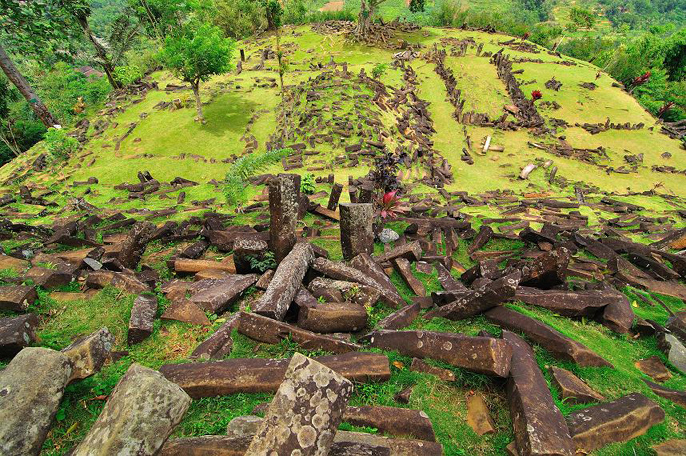 
Strong suspicion menhir-this leads to abdominal cavity in Gunung Padang megalithic sites, as at the terrace below, within 50 meters of the location, which is parallel to the fifth terrace, there is also characterized by the same menhir. . Two stones with one meter high and a diameter of about 40 cm is standing parallel to a distance of about two meters. There is a similar line in both these rocks as stone was found on the terrace pinstripe on it.

. This standing stone is estimated as the entrance to the arrangement of stairs under it. The discovery stair staircase on punden smaller mountain east side of the field is reinforced by the findings of the fountain.

"We found that the water source is about 200 meters down. . It is parallel to the ladder. . It strengthens the unity of a structure and construction of Mount Padang. rings flow reinforces previous ancient religious community leads worship at Mount Padang, "said University of Indonesia archaeologist.

Although sound absurd, the story was later traced to a team of experts. . With the intervention of technology, the team first scan of the altar, from the surface and the cliff. Danny Hilman. "From the 3D geoelectric and georadar discovered two doors in the hallway. Hallways were now open team effort," said team leader, Danny Hilman. . Scans were performed at 14.00 yesterday and earlier, strengthening the presence of a hallway.

The hallways of Mount Padang

Sought is "treasure" that is more valuable and essential than the material: the science of a priceless ancient civilization


Based on the survey results geomagnet, Integrated Research Team Self-aware of the high magnetic anomalies in several locations Mount Padang. . One of them, which included a large, situated right next to the alleged structure or underground chamber.

. High magnetic anomalies can be associated with the accumulation of goods made of metal or metal


Geological team that is part of the Integrated Research Team Self Mount Padang sure has found space in the belly of the mountain meadow. . This space is a length of 10 x 10 x 10 meters at a depth of 25 meters 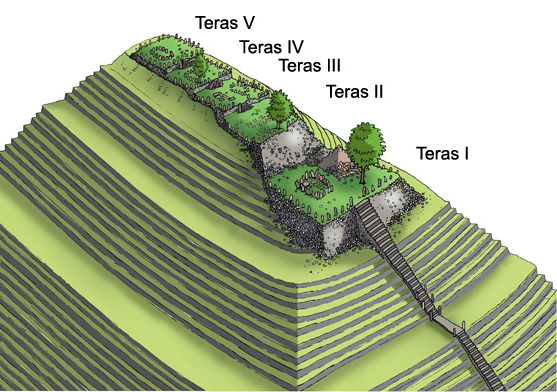 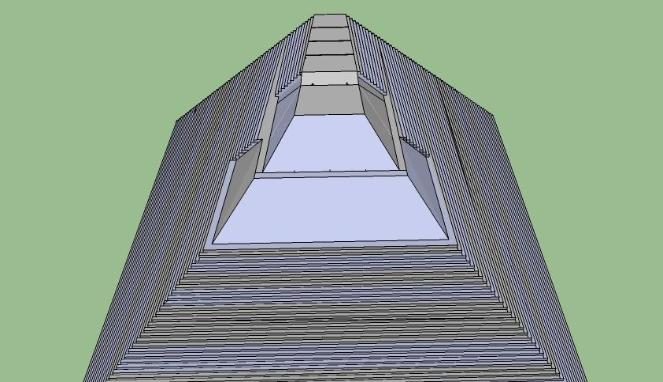 posted on Sep, 11 2012 @ 10:33 AM
link
This is very fascinating. Thanks OP for posting this thread. Lately I've been getting more interested in ancient java, india, malaysia etc... that area of the south asian continent and islands. I am starting to believe from comparing cultures of nearby civilizations that the area of Java had a huge trade center going on much like carthage was a huge trade center due to it's location. I think especially india had a lot to do with the trade going to that region of asia. The local cultures there talk about dynasties and kings going back into antiquity. So I think this thread is an awesome addition to that theory now that they are finding these ancient temples.

Yes the articles mention the work of Stephen Oppenheimer and his book Eden in the East, which is a good read, positing an early civilization related to the Sundaland shelf that was submerged.

posted on Sep, 11 2012 @ 01:08 PM
link
Thanks for the replies, hopefully much more to come from this site regarding the underground cavities.

posted on Sep, 11 2012 @ 04:11 PM
link
Because of the fine job and information gathering on this original thread/post, we will be covering this in the upcoming Live broadcast of ATSLive this Saturday evening (towards the last hour, show begins 6pm PST).

posted on Sep, 11 2012 @ 06:11 PM
link
And well you should.....This is exciting to say the least.....It seems the pyramid is a world wide phenomenon dating back to the same 10,000 years in many places.....Recent discoveries are painting new pictures of our history and re establishing a scientific basis for archeological research instead of conjecture and manipulation.
I hope the paradime gets shifted towards less personal pride and more cold hard investigations which reveal ALL the data.....

posted on Sep, 11 2012 @ 06:19 PM
link
Great job with this thread OP! Congrats on the include from johnny. I wish this thread got more exposure as it is damned good. Thanks for the recommendation of the book. I think I will check it out. THere is so much more going on historically with this region than people suspect. Also, an ancient culture here would also explain a lot of other stuff about pacific and indo/asiatic cultures.

Thanks, the Indonesians seem to have put the effort in there, in terms of sending in a team of geologists and archaeologists, so hopefully more reports soon.


It will be interesting to learn to what extent they consider the mounts to have been terraformed, as there are quite a few sites being considered on Java. A lot of sites that report on these investigations go down the comparison with the 'Bosnian pyramids' route which is i think a mistake, the hills are almost certainly natural,but with extensive terrace features and also the general pyramid shape of the hill enhanced from certain viewpoints, which would have involved great effort.


If the groundwork for this dates back to 10,000 BC it will be highly significant.

Indonesia has some pyramids

Also quite a bit more on the dating and drilling here;


Ancient catastrophic team has conducted tests to calculate the age of the remaining carbon charcoal and organic herbs Five Terrace Mountain Padang Cianjur. And the results prove the age of 10,900 BC.

posted on Sep, 11 2012 @ 09:47 PM
link
These are remnants of Ancient Lemuria. In that area flourished great civilizations but after the great floodings of the ice age melt pulses, earthquakes not to mention extreme climate changes due to a rush of cold water entering the ocean wiped out many great civilizations to be lost almost forever.
edit on 11-9-2012 by Shadow Herder because: (no reason given)

posted on Sep, 11 2012 @ 09:50 PM
link
These structures may not all be exactly like the Egyption pyramids that are newer pyramids. These pyramids are everywhere, the ground piercing technology that is in space found many possible locations, even buried in Saudia Arabia and Africa. The discovery of these things is going to hurt the tourism where the present pyramids are, the leaders of these countries are going to fight recognition of other pyramids tooth and nail. A little bribe money and archeological funding goes a long way in covering things up. A few antiquities just disappear to wind up in someones hands as a reward. Nobody will miss something buried in paperwork in the storerooms of a museum.

posted on Sep, 11 2012 @ 09:53 PM
link
The area in which these people lived was drastically changed 10,000 b.c as the ocean rose 124 meters plus globally as you can see in this next image that what is in light blue was above sea level 10 thousand years ago.