A Mummy in the Garbage 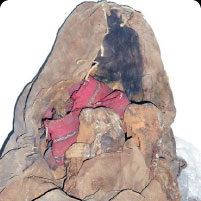 I've been doing research and threads about ancient cultures in South America for a long time, but this one surprised me too. It's about a pre-columbian mummy but can't post it in the lost civilization forum. Probably a mod will tell.

An unusual discovery happened Monday afternoon in one of the most exclusive areas of San Isidro (Lima). A mummy, apparently a pre-Inca culture, was found by recyclers in a dumpster.

The unusual incident occurred at the intersection of Javier Prado Avenues and Salaverry, a few meters from the current Japanese ambassador's residence. Jose Lopez More (32), Manuel Vilchez Villegas (41) and Jair amaniel Tamani Becerra (28) performed their daily work to collect cardboard and plastic when they stumbled across human remains.

"The body was in a blue bag, we thought it was a fresh corpse, but when he was a mummy thought give it to the police," declared after being operated near the Parque La Pera of Love, by agents of the police station Orrantia del Mar.

Despite his testimony, the three men are being investigated as they have not ruled out any huaca desecrated and that his intention was to sell the mummy, which yesterday morning was taken to Forensic Medicine to determine its age and origin.


LOL, I would say : "One man's trash is another man's treasure".