posted on Aug, 7 2012 @ 06:00 AM
link
Thought everyone would find this interesting as did I. Do you guys think this face appears to be demonic in nature along with the activity that is shown in the video. For whatever reason the face gave me the creepies.

But seriously, I couldn't see it clearly enough to tell what it was, if it was anything at all. One would think that a demon that could leave scratches on someone could make his presence known far more clearly than that though. JMHO.

1) Clear case of pareidolia. There is no face in the image - just a bunch of random pixels (from a night vision camera, no less) that look like a face.

2) Despite point 1... there was a sound in that video that completely freaked out my cat. She went REALLY wide-eyed, pricked her ears up, and looked around for the source of the sound. Dunno what it was though, nothing in particular that I could hear.


There's 3 minutes of my life I'm not getting back. What a waste of time.


There's 3 minutes of my life I'm not getting back. What a waste of time.


Wait the video is only a minute and 40 secs....you tellin me you played that twice? LOL Fool me once, shame on you...fool me twice....well.....you cant get fooled again.....ah GWB I miss those sayings ole buddy.


I couldn't see any face. I paused it to try and the best I could come up with is that the image reminded me of Scrappy Doo from the Live-Action Scooby Doo movie...

posted on Aug, 7 2012 @ 12:01 PM
link
Any time you have "creepy house" footage at the beginning of the video to show how scary the house looks from the outside plus creepy music to set the mood - it's probably either fake or in this case, such bad evidence that it needs the other stuff to make it seem more "real" or "scary" to viewers. Either way, this was a real disappointment for me.


Beelzebub is really just the demonization of the Canaanite god Baal. Specifically, Baal-Zebul, or the "Lord of Princes" as the name translates to.

In this case Baal is not seen as a demon, but as a ruler and savior.

In his mythology he is the husband/brother of the goddess Anat. El, or Il, the Canaanite supreme god is determined to put Yamm, the sea-god (possibly Leviathan), on the throne as King of the World. Baal challenges Yamm for the throne, is victorious, and El determines that Baal must die for killing his son.

Baal, hearing this, journeys to the Underworld where he confronts Mot, the personification of death. At first they battle for seven years, but Mot finally triumphs and Baal is killed. Enraged by his death, Anat travels to the Underworld and also confronts Mot. She burns him, flays him, cuts him up, and does all kinds of other stuff to him. Upon being bested Mot agrees to return Baal to the living world.

Once returned, Baal adresses El, demanding to be made King of the Gods as he has conquered the sea, and death, as well as the fact that El's reign is nearing its end. El is still resistant though; his wife, Asherah, "she who walks on the sea," steps in and persuades El to allow Baal to rule. Upon doing so, El submits and Baal is made heir and King of the Gods.

Baal-Zebul, therefore, is a title of Baal, as the Lord of Princes, or King of the Gods. Interestingly enough, history is rife with information on Asherah (here, here, and any Google search), Baal (any wiki, Google, or mythology book), and Anat (any Canaanite, Egyptian, Mesopotamian mythology book, or Google). The first having been the Jewish god's wife, who upon leaving him took throngs of his devoted followers with her. The second, Baal, having become Beelzebub in the Church's smear campaign. The final, Anat, bearing extremely strong ties to the Sumerian/Semitic Inanna/Ishtar, whom the Bible demonizes as Ashtoreth.

The Church has a long history of demonizing the religious and spiritual figures it cannot compete with. Beelzebub, or Baal-Zebul, being one of them.

edit on 8/8/12 by Wandering Scribe because: spelling and grammar


I must be confused because I don't see a face ANYWHERE, it's supposed to be his face right? I see what appears to be a doorway and what looks like a velociraptor's tail and the heel of it's foot heading through the door. Maybe if I squint real hard I can pretend its an elephant trunk and the elephants front foot... or the dark lord Cthulhu... but I don't see a face or anything other than two dark smudges... 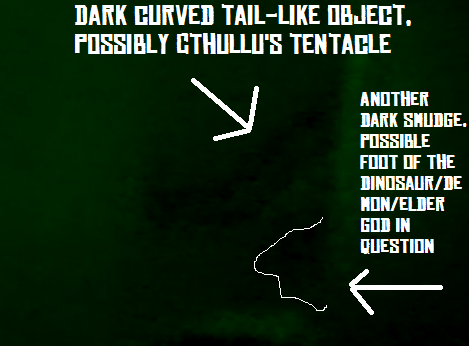 posted on Aug, 17 2012 @ 06:08 PM
link
Even if it was demonic, and from what the file shows it not. What makes you think it is beezlebub or satan, snake, great lier,antichrist fallen one, morning star, lucifer among other names. Please tell us why it would him in the first place. You have me baffled


One cannot place any faith in investigators who purposefully lead an audience into seeing what isn't there. The "face" they are focusing on is no more than mere matrixing, and for them to suggest it is anything more is lunacy. Add to that the complete stupidity they display by claiming it to be Beelzebub himself and they make themselves out to be as fools.

I see this as nothing more than charlatans trying to fool their audience.

edit on 17-8-2012 by HallowedSpirits because: Fixed spelling.