It looks like there is some genuine evidence that points to Big Government / Big Corporation "cooperation" when ObamaCare was being "debated" and sealed.

Republicans on the House Energy and Commerce Committee have released documents showing some big drug companies agreed to "press" ObamaCare with things like ads and to run a “very significant public campaign” and pay for the efforts !!!!

This is devastating... The Obama Administration has been denying this !!!

Democrats are in a wild frenzied reactive state and are coming up with all kinds of excuses reasons for this outrage.

The internal memos and e-mails for the first time unveil the industry's plan to finance positive TV ads and supportive groups, along with providing $80 billion in discounts and taxes that were included in the law. The administration has previously denied the existence of a deal involving political support.

The documents were released today by Republicans on the House Energy and Commerce Committee. They identify price controls under Medicare and drug importation as the key industry concerns, and show that former Pfizer Chief Executive Officer Jeffrey Kindler and his top aides were involved in drawing it up and getting support from other company executives.


“President Obama’s efforts to enlist the support of private industry are exactly what presidents have always done to enact major legislation,” U.S. Representatives Henry Waxman of California and Diana DeGette of Colorado said in a joint statement.

Waxman and DeGette, in their statement, said the Democrats had managed to get more than the $80 billion out of drugmakers described in the memos, putting the figure at $110 billion to $125 billion.

Included in the documents released by the Republicans was an October 2012 e-mail from Bryant Hall, a PhRMA lobbyist,

In it, Hall wrote that the Obama administration had agreed to block a proposal by Democrats in Congress that would let people import pharmaceutical products from outside the U.S., where price controls offer them at lower costs than they can be obtained inside the U.S.

The White House “is working on some very explicit language to kill it in health-care reform,” Hall wrote in an e-mail sent to Kindler and Sally Susman, a current Pfizer executive vice president and head of the New York-based drugmaker’s public policy and communications operations.

What was more important ?

"Healthcare" or the MONEY ?

Corruption Incorporated has been exposed again !!

It's not as if PhRMA just walked in an offered to help. Duplicitous, Chicago-thug as always, Obama was bad-mouthing big pharmaceuticals in public, while pressuring them in private to "play ball," or else.

The Obama administration aggressively pursued the pharmaceutical industry to make a deal in support of health care reform legislation in mid-2009, according to a series of emails released Thursday by Republicans on the House Energy and Commerce Committee.

In particular, pharmaceutical industry executives' correspondence confirmed that White House officials agreed to “kill” efforts on Capitol Hill to allow drugs to be imported from other countries — one of the chief legislative priorities of the industry — to get the industry’s backing.

In one email exchange obtained by the committee, a pharmaceutical executive said that then-White House spokesman Robert Gibbs had suggested he would publicly call out PhRMA if it didn’t sign to the deal. Another exchange says the White House threatened to use the president’s radio address to call for rebates for prescription drugs in all of Medicare Part D, a proposition the drug industry strongly opposed.

Reimportation of prescription drugs, an issue that the pharmaceutical industry has repeatedly opposed, played a strong role in the negotiations. While the issue has come up for votes on Capitol Hill numerous times over several years and never become law, the industry has always worried that it will.

Nancy-Ann DeParle, who then led the White House Office of Health Reform, said in one email to a pharmaceutical industry executive that she favored the reimportation policy but agreed to stop pursuing it because the industry was being so constructive on health reform.

“I pushed this,” she wrote to a PhRMA lobbyist, “but [Phil Schiliro, Dana Singiser] and I made [the] decision, based on how constructive you guys have been, to oppose importation on this bill.” She was referring to top White House legislative affairs officials.

Here's an email where a WH staffer appears to be quite pleased with the "help" they are providing PhRMA in exchange for support: 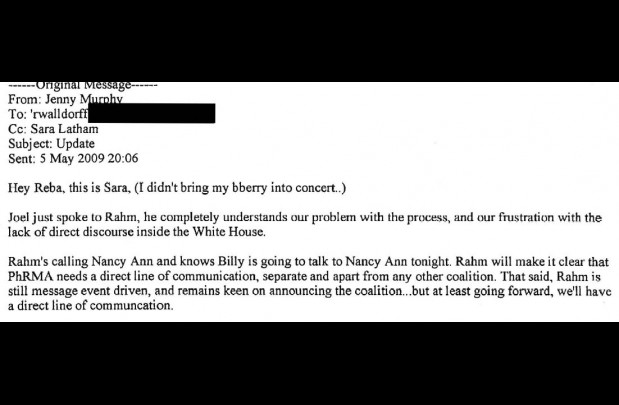 Of course, the Obama campaign is "shocked, I tell you, shocked." Not tht this happened, but that it would come out during the campaign:

“This is the same House committee that has spent, according to one report, over $1 million in taxpayer dollars for the past 15 months looking into baseless allegations on Solyndra — but has done almost nothing to move legislation that would create jobs or grow the economy,” he said.

Originally posted by neo96
reply to post by xuenchen

There's a whole lot of hidden behind the scenes issues at stake with the ObamaCare debacle.

Obama is shake'n in his shoes.

Just think what kind of deals were made with the big insurance companies.