Therefore, the entire Dems Vs GOP fight over the richest Americans paying their fair share is all smoke and mirrors, another contrived fight in order to keep the American voters distracted from the real issues.


somehow I dont think you done the maths right. A thinktank had said that if all the people earning 1 million pounds or more a year were taxed at the same rate as the 1950s then the total revenue from that alone would amount to something like 715 Billion dollars a year. The national bebt would be paid off in 10 years

The Government's right to get money has become more important than the citizens right to.

So the op is right it will not raise revenue and that cash never goes to where they say it going to go and who it is going to benefit.

It benefits Government and there overhead.

Originally posted by babybunnies
And here's why.

Having said that, "taxing the rich" more, for example the Buffett Rule, won;t help the government deficit very much. In fact, if you confiscated ALL the money beyond $250K per year, i.e.: 100% of it, it wouldn't make a dent in the deficit. That's the irony here. People seem to thionk if the rich pay "their fair share" (1) then everything will be peachy. In fact, the problem is far greater than that.


I'd say there is more than a fair degree of truth to your words. Don't confuse anyone with the facts though! The Politicians need us tearing at each others throats. If we weren't attacking each other, we might turn toward them.

So shhh.... Let the masses really think the problem lies within their fellow Americans. Washington laughs everyday over this, I'm sure.

posted on May, 3 2012 @ 02:55 PM
link
Bull. Government spending and tax rates are two separate issues. No question, something has to be done to force government to curb spending, stop and recover waste, close ineffective departments and programs and generally get real.

Tax rates need to be revised back to the way it was before accu,ulated power and influence steadily lowered the tax rates for top earners and peppered the tax laws with loopholes specifically tructured for the wealthy. They are able to shelter their income form taxes using manuevers and obscure tax code that is utterrly beyond the reach of the rest of us. They can say whatever they want. The fact is tax law has been steadily changed to inequitably benefit the wealthy. And the argument that doing so benefits the (general) economy is entirely disingenuous. Just look around.

so we would still only be slowing down the retarded spending.

Only way to get rid of deficit is to shred the damn credit card and spend only what you take in.

Ever known someone who went from a 30k/yr job to a 80k/yr job, and instead of continuing to live frugally (like you SHOULD), decided to spend all their newfound income as they get it? Situation remains unchanged as far as net worth goes.

Increasing taxes alone, on anyone rich or poor, will not solve the problem.

During the most prosperous eras of the 20th century here in the US, there was a thriving 'middle class'. These people worked and paid taxes, bought homes, cars, refrigerators, washers, dryers, lawn mowers...

.. but the middle class is extinct because the jobs they held were allowed to skeedattle off to China. We don't have the steel mills, the welding shops, the auto industry, the TV, appliance and textile manufacturers we once did and without those jobs, there is no middle class to work and pay the taxes that fed the great boiler.

So... now we have this political civil war between the liberals and conservatives. problem is, neither is willing to admit that we did this to ourselves, neither will admit that they both allowed it to happen.

Tax the rich, tax the poor, tax the telephone poles... it won't matter until we rebuild our middle class by rebuilding our industrial sector. Those that fled to China should be excised from US citizenship. It wasn't that they were going broke, they just wanted to make more money than they could at home... where workers had to be treated like human beings.

The candidates that actually had any independent thoughts outside of the planned crash, were destroyed by the media and their own parties.

If you really want to save this nation and rebuild America... it needs to be from the bottom up. No more China for every need. We also need to cease this war on terror and decommission the Patriot Act.

Then... after that, if you have the stones... unelect every single incumbent in Washington.

How does it take it 'out of the economy', neo? When my tax dollars go to support those wars you champion, that benefits the arms dealers like boeing, who create jobs in the areas they have factories. That creates jobs.

Are you antiwar now, neo?


The more you make the more you spend simple fact another fact is the majority of people work for someone else when they decrease their spending that means that person who is making that product loses theirs.

And War? Where did i ever say i supported war? putting words in my mouth that i didn't say obviously because you know what i am thinking.

Get over everyone is entitled to their opinions do not like it?

How much money has been spent on entitlements now? over 120 trillion dollars and counting that is not sustainable and consuming the wealth from other people who do work and inject fresh capital into that system that is sustainable.

Not ony sustainable that has lifted people up out of poverty more than any other Government social engineering program ever has.

dead people don't pay taxes oh and they most certain don't pay their fair share and someone sure the hell didn't give them a fair shot or shake.
edit on 3-5-2012 by neo96 because: (no reason given)


It's not a fact, it's falsehood. There have been reports in the past 18 months that the companies have solid cash reserves, and still are not hiring. Also, if you a personally rich you would spend more on luxury items which can hardly spur the economy.


Get over everyone is entitled to their opinions do not like it?


Challenging an opinion you package as fact is not censoring you.

Try and keep up.

So in addition to disregarding verifiable facts, you disregard syntax and grammar? 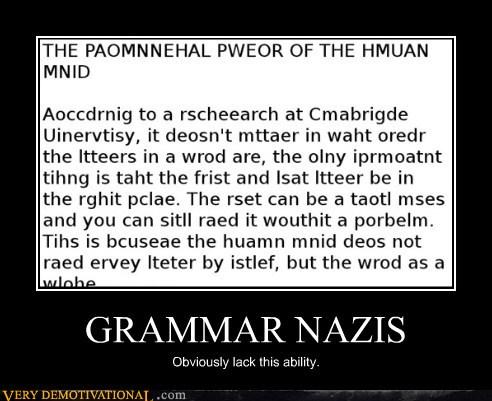 That is an interesting graphic and demonstration. I'd been surprised when typography went over that on our first day. I couldn't believe it was true until they showed a far less interesting version of your same graphic, timed how long we saw it..and then asked about it. Sure enough, it looked like gibberish but everyone got the body of the text just fine.

Amazing how the mind works, isn't it? Now if only the basic of economics and tax policy were so easy to demonstrate. Kennedy understood it as well as Reagan would decades later. Why can't so many current leaders get it?

Taxing the rich doesn't add revenue because the people being taxed this way are the ones most capable of working the system to entirely avoid the tax. I believe the Rich are fine paying what isn't worth the trouble to get around with the books of loopholes our code has. When the pain of the taxes hits a certain point though, those same rich people turn on principle and are as likely to spend MORE in avoiding the tax than it might have taken to just pay it.


It's ironic to me that the people crying about greed and excess the most are the first in line to support greed in Government form and defend excess at almost any level, if the people doing it carry a GS rank and not a private sector status. Go figure, eh?

too much creative accounting out there

Also..."Trickle down economics" doesn't work either. But that's a completely different conversation to have another time.

No...it is spending. Not social programs and social safety nets...those are the sacrificial lambs being dragged to slaughter to hide the real spending monstrosities.

The "real" spending atrocities are ....

Government subsidies to pay farmers and producers to "not produce".

Foreign aid to countries that hate us and use the money to Conspire against us.

Hundred of billions of dollars in the military industrial machine. These are corporations folks. Private corporations, building weapons and selling them to you "Joe Citizen" for your tax dollars. They set the price and the Gov agrees to pay it. AND...with that in mind...an unused weapon is a useless weapon...why spend 10 billion dollars on an advanced fighter jet and not use it...must "always" find a need to use it, wear it out and then replace it...and the Military Industrial machine keeps on churning and turning....

I am all for a strong national "defense"...but sucking out our taxes to finance aggression is a real element of the problems we face... it is not all of it...but it's price tag sure does sting.

posted on May, 3 2012 @ 06:50 PM
link
What do liberals do when they want people to quit smoking? They raise taxes on tobacco. Makes sense, because when you tax something you restrict the activity being taxed.

So using the same logic if you want to rich to pay less, you would raise tax rates.

I have yet been able to find a Liberal who can explain this hypocrisy. Can't have it both ways.

It will raise equality, which is just as important as raising revenue. America is becoming an aristorcracy which is not only unconstitutional, but immoral, the wealthy have too much money to corrupt society with.