Who is Sarah Phillips? 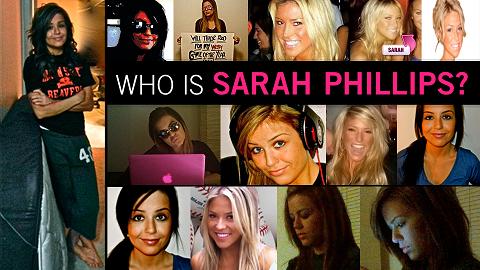 This thread is all over the place...so please bear with me. It's early

Unless you follow sports, and are into social networking, I doubt that you’ve heard of this story yet. However, it’s an interesting one that does not require an interest in sports or social media as it deals with social engineering, manipulation, identity theft, and a complete disregard for the norm by the (sports) MSM.

So basically, this person (as of now, no one knows for sure WHO exactly they are) got popular as a supposed “hot” 22 year old female who was really knowledgeable about sports and betting…got a huge following on her gambling blog and Twitter, and eventually landed a job writing for ESPN’s “Playbook” – Formally called “Page 2” – where even Hunter S. Thompson often wrote.

All without a face to face meeting or vetting of any kind.

Now, I know a lot of people don’t use Twitter, or understand it, and that’s fine. But I’ll explain something real quick as it’s relevant to the story.

If you have a lot of “followers” on Twitter (like 150k) an opportunity arises for you to make some cash via advertising. Same thing for certain facebook pages…If it’s a page that garners a certain amount of likes, you get paid through advertising.

Alright, moving on. Throughout her time writing, she would often use random photos of hot chicks, claiming it was her…and what do guys who like sports also like? Hot chicks of course. So she was obviously using that angle to her advantage, and her manipulation began immediately.

Pre ESPN she worked for covers.com, a website focused on sports betting. Here is how her time was spent:

A few days later, Phillips asked Matt for his advice on a Cardinals-Brewers game. The over/under for the game was 7.5 runs. Matt told her to take the over. She said she was betting $3,000 on the game. She sent him the betting slip to prove it, and he thought this was way over the top. Well, he thought to himself, at least I'm not betting against her. The final score of the game? 5-2. She lost her $3,000, and she was mad. She responded by sending him an invoice for $5,000 through Nilesh Prasad. "She said I owed her that money in addition to thousands more for reasons unbeknownst to me," he told Deadspin. "She said if I didn't paypal it to her that night she would have the LAPD come to my apartment and rob me. I told her I don't carry cash, and kept a hunting knife by my bed for three weeks." (According to a screengrab of a Gchat conversation, she told him the LAPD would "cordially come by" his apartment to take the money). Just as Matt became certain he was dealing with a scammer and prepared to cut ties with her, Phillips received some news of her own: She was going to work for ESPN.

Not only did things like the above occur numerous times, but she also solicited people for money towards a website she was starting.

"The couple times I did send money, it was designated for adspace on her website," he continued. "Guess how many ads went up on that piece of sh** website? Zero. To cap it off, she deleted her gmail account, thus eliminating all the evidence on her end, when she could no longer get money from me. A true scammer move."

Eventually, due to her popularity at covers.com, ESPN contacted her to write for them.

Not long after, she got a contract to write a weekly column for ESPN. It made some sense for Bristol. She was young and attractive, if any of the photos of her were to be believed, and she wrote fluently about sports gambling, a subject ESPN has always struggled to address, even obliquely. All those mismatched photos and all those casually dropped personal details kept her audience at a teasing distance. In general, she seemed precision-engineered to appeal to a certain kind of ESPN reader.

And so far, no one had seen this person. Or checked her out apparently.

During her time writing for ESPN, she managed to highjack two twitter accounts with hundreds of thousands of followers (she was about to get more before the story broke, all dealing with sports satire) and a facebook page called NBA Meme’s.

Her idea that was pitched to these people involved the starting of a website that promoted funny sports stuff, and that it would be backed by ESPN. Contributors would get a percentage of revenue based on page views. Some of the people she contacted in an attempt to highjack their account included the John Madden and Happy Gilmore parody page ( 234000 followers combined) People were easily persuaded to go along with her request as she actually worked for ESPN.

You can read about how she actually convinced someone to turn over their facebook page here.

It goes really, really deep. And the sports world has been talking about it a lot since Deadspin broke it last night.

Is An ESPN Columnist Scamming People On The Internet? [UPDATE]

Sarah Phillips Admits She "Concealed" Her Identity, Made "Poor Choices With Who To Trust" [UPDATE]

As you can see in one of the above links, ESPN did fire her after all the craziness came to light.

But the issue I want to hit on is online journalism in general.

Hell, we see it here on ATS all the time…Freelance writers posting about UFO’s or Government cover-ups or whatever, and because it came from a new site, well, you know, it’s gotta be true right?

In the quest of Denying Ignorance”, whether in the subject matter found here, sports, entertainment, or a myriad of any other subjects, how can people really, truly, discern reliable, reputable, unbiased, ethical journalism anymore?

But yes, we can discern credible journalism from it's evil twin. Just don't be gullible. Don't believe someone when they say they are a certain person when they're on the internet. Check into them. Especially if they ask for money. It's that simple.

What happened here is that no one bothered to check into "Sarah Phillips". From your next door neighbor to ESPN, they all just took her word for it because she(?) posted pictures of a hot looking woman who claimed to be Sarah Phillips who knew alot about sports betting. All the little boys out there got hot and bothered and showed the whole world just how small their pair actually is. Everybody was gullible. Except "Sarah Phillips". It's just that simple.

If someone, in a case like this, doesn't want their identity known, there's a reason for that. Drop them.

If someone, in a case like this, turns out to be someone you just can't figure out, there's a reason for that. They're out of your league.

I think one problem that's coming up is that so many people are using things like Facebook and Twitter to be sociable, the line between socializing with someone in real life and online is getting blurred. Blurred to the point where people are acting like they know someone just as well online as they would meeting them face to face. This story is a good case in point for that theory and says a lot at how naive people really are.

Sorry, but for all our technical advances in this field, nothing still beats good old fashioned human interaction.

Just ask all the people who got "owned" by "Sarah".

Addendum: I read all the apologies that this person made after the fact, and I'm still not convinced. This person is trying to pawn off "her" actions by saying she trusted the wrong people. Funny, but the people she scammed could say the same about "her". Her only recourse is to go into the ESPN offices or give some kind of a news conference armed with information that will prove beyond a shadow of a doubt that she is who she says she is. But something tells me that that isn't going to happen. She lied once online about who she is, why would anyone believe anything else she says online?

Since I'm a betting man, I'll go with the odds that "Sarah Phillips" will slowly fade into oblivion only to be resurrected at a later date as someone else. That's what scammers do. And still, no one will be the wiser because people will probably not have learned from this lesson. People are stubborn that way because pride gets in the way. People don't like to admit they were had and then learn from it.

This is an interesting story because I believe it can help accentuate the fact that people still need to meet face to face when conducting this type of business. Freelance writer or not, there is still money and professional reputations at stake on the part of the people who hire freelancers. You don't put your blind trust in someone on this level of business. I'm a freelancer myself and, while I'm not on the level of major publications quite yet, I'm not so naive to think that I'll get my foot in those kinds of doors without showing my face first. I can have the best resume in the world, but this story just points out the fact that an online resume means absolutely nothing. You really want to get ahead in the business world and elevate your personal status? Show your face. Walk the walk and talk the talk. I'm learning that first hand myself. And if I may say so, I personally believe that I'm learning from the best. And that's mainly because I meet with her face to face from time to time.

You have to meet with people in person and you would think that someone with the reputation and stature of ESPN would know that. I know successful people who are NOT on their level who know that.

Apparently not though.
edit on 2-5-2012 by Taupin Desciple because: (no reason given)


All great points. Being gullible when dealing with people on the internet is nothing new. Have you read this interesting story? Straight from our beloved ATS:

Help! Does anybody recognize this jersey, or person for that matter?

It’s just that this person got so far into the MSM on nothing…and in the process scammed or potentially scammed numerous people. That’s what worries me.

posted on May, 2 2012 @ 11:39 AM
link
Just goes to show how far we've really come huh? For all our technical advances a lot of men still fall for a pretty face. That Karly girl is cute, no disputing that, but because she says she's that person doesn't make it so. Now if she said what she did in real life, that would be a different story. You can tell by mannerisms, facial expressions, eye contact, things like that to help determine if they're telling the truth or not. You can't do that online. I can post a picture of a man who looks a lot like Johnny Depp and say it's me so I can get a lot of girls, but in real life I can look like George Costanza.

I see your point and it worries me too. after all the advancements we made, people still fall for snake oil salesmen.

Now, back to work. It's been a marathon session.