Newt to suspend campaign today. And then there were two.... 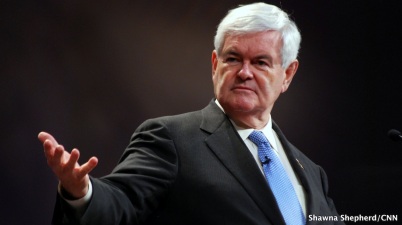 Many sources have said there will be a joint campaign for a Romney- Gingrich endorsment.
Newt set to be suspended
The Guardian

Hammond said given that Gingrich already has signaled his intention to suspend the campaign and support Romney, “It’s not any surprise. It’s no surprise where he will go.”

Gingrich will be spending most of the summer and fall on the campaign trail stumping for candidates, Hammond said.

Regarding the campaign’s debt, which was $4.3 million as of March 31, Hammond said about $500,000 has been retired. Gingrich is expected to address a plan for paying off the rest.

In a phone interview Tuesday night, Gingrich told USA Today he had no regrets about running for president, but, “I have regrets about not being smarter about how to run.” He said he wished he had been “bolder” by not relying on consultants and focusing on some of his proposals regarding energy and science. With “more discipline and more courage to be more outside the mainstream, it might have worked better.”

Regarding the man he bitterly criticized during the campaign, Gingrich now offered praise. “Mitt Romney met the first criteria of being a good candidate: He won.” He added in the interview: “Now, you have to respect that.”

“We sure didn’t give it to him. We did everything we could to slug it out with him, and he ended up being tough enough and being good enough at raising money” to win the nomination, Gingrich said.

The Gingrich campaign has not made a decision about whether to release its 141 delegates.

And then there were two....Romney and the good doctor Paul
I would have thought Newts announcement would have come months ago, when he first started noticing his campaign debt mounting.

The race is heating up and Dr.Paul holds the extinguisher!

posted on May, 2 2012 @ 09:41 AM
link
I find it interesting...no, more than interesting. That the one person, whom the MSM gave the least amount of press time to, actually left out of thousands of election reports altogether, is one of the last two standing.

I'm reminded of the story of the Tortoise and the Hare...we all know how that one ended.


hint? hint from who? the media?

So are you admitting to saying that the media is in control of the show and if the media says your not worthy, then it must be true?

Just because the media says so, doesnt make it the truth.

posted on May, 2 2012 @ 01:43 PM
link
Check out the link for some incredable videos of Newts most sensational, confusing and jaw-dropping things that he tried to tell America during his campaign.

*cant find a youtube vid of it, sorry you'll have to visit the link for the clips.*

Reality bites Newt, Wild ride hits a dead end *video*
edit on 2-5-2012 by Talltexxxan because: (no reason given)