posted on Apr, 8 2012 @ 06:35 PM
link
North Korea has moved into place a long-range rocket for a controversial launch later this month - amid reports it is also planning a nuclear test. 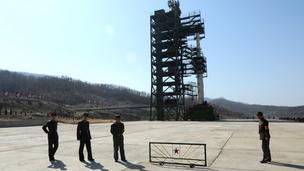 Oh dear! Looks like they are throwing the gauntlet down? Silly Billys!

Link to article and video

posted on Apr, 8 2012 @ 06:54 PM
link
Do I have this right? Instead of the rocket
launching a satellite into space it could be
a nuclear test rocket instead?

It looks according to the map that Japan
and S Korea are not in the path, however
to think it may hit Australia or another land
mass is very concerning.
edit on 8-4-2012 by crazydaisy because: (no reason given)

The U.S. takes a huge lead rounding the first corner they are readying their missile defense systems for the N. Korean rocket launch. As Japan and Australia try to keep pace it seems the U.S. is miraculously pulling S. Korea into second place. Hoping to call a bluff the U.S. rounds the second turn beautifully still maintaining a huge lead. What is this.......N. Korea prepares for a test to launch and is quickly gainining on the U.S..........rounding the final turn it's neck and neck.........

HOLD ON FOLKS PLEASE HOLD ALL TICKETS WE HAVE A PHOTO FINISH!!!!!!


Yes, apparently it's what is under the payload that is of concern. North Korea's version of ICBM?

Seems a silly move regardless if you ask me.

If China are such great friends, why don’t they save money and get them to place a satellite for them?

posted on Apr, 8 2012 @ 07:07 PM
link
Ive been having premonition dreams the last month or so. In one dream a voice interrupted and blurted "South Korea just Nuked us." I thought it was odd . Then I saw the Obama hot mic video when he was in South Korea and it kind of bothered me. What will it take for men to understand we can not use nuclear weapons against each other. We all will be poisoned and die. Of course this will eliminate alot of the population paving the way for the NWO. Then i imagine the FEMA camps will open as "refugee camps" for the displaced. Isn't it interesting how the very things used against us to irradicate us are labeled by the government as "for our benefit" and that it is helping us. Hmmm where have we seen this before? Oh yeah WWII and the Nazi regime