A Lebanese national, who was arrested earlier this year in Lebanon for spying for the Israeli spy agency, confessed that his agency, Mossad, and the anti-Iran terrorist Mojahedin-e Khalq Organization (MKO) have long had tight cooperation against Tehran.

According to a report published by the Habilian website, the official website of Iran's Habilian Association - a human rights group formed by the families of 17,000 terror victims in Iran - the confessions were made by Mohamed Ali Lobnani, who spied for Israel under the cover of a Shiite cleric in Lebanon and was arrested this may by the L

posted on Nov, 29 2011 @ 12:35 PM
link
I know this is a very biased source, but then so are all the stories from the other end of the spectrum. I personally don't trust any news lately from either side because they both have the propaganda machine in overdrive but I wanted to share this news for those who might care to hear it.

If this news is true (I said if) then this means a lot of the so called "civil unrest" and "terrorist attacks" in Iran were most likely staged.

The MKO's sole purpose is to overthrow the current regime in Iran. Their Wikipedia page says so at least. Wouldn't it be embarrassing for Israel if Iran came up with proof of this? I know this won't happen because if these claims are true Mossad would probably do their best to make sure they can't be officially traced back to Israel.

english.farsnews.com
(visit the link for the full news article)
edit on 29-11-2011 by Corruption Exposed because: (no reason given)

posted on Nov, 29 2011 @ 12:50 PM
link
Biased or not. The quest for facts cannot be "exclusive" since both the honorable and dishonorable operate in the same manner.

We are left consciously choosing to disregard their gyrations and flailing to ask... what purpose does the release of this information serve? Expect to further cement that our governments are ALL duplicitous and self-serving.


MKO members are much known to Iranian nation .

The defected members revealed that the main ringleader of the group, Maryam Rajavi, issues the execution orders personally and condemns to death all the dissidents who refrain from obeying her orders and all those who plan to defect from the MKO.

According to the report, the MKO ringleaders have prevented the members of the group from meeting their relatives for the last two years in a bid to prevent their defection and escape from the camp.

Also in March, another defected member of the MKO revealed that the female members of the group have been living under captivity for more than 25 years and are not even allowed to appear in public places alone.

"It can be firmly said that 95% of the women in Ashraf Camp (the terrorist group's resort in Iraq) have not even been allowed to step in Iraq's public and recreational places alone all throughout the last 25 years," the defected member said.

The former member of the MKO also revealed that nearly 70% of the female members of the terrorist group are single and have not been allowed to marry anyone in or outside the group.

And only a total 10% of the married members have been allowed to have children, he added.

The MKO is behind a slew of assassinations and bombings inside Iran, a number of EU parliamentarians said in a recent letter in which they slammed a British court decision to remove the MKO from the British terror list. The EU officials also added that the group has no public support within Iran because of their role in helping Saddam Hussein in the Iraqi imposed war on Iran (1980-1988).

They are the most cruel radical group on this planet. They do whatever necessary to get to power and that is why Iranian people hate them much.

Iraqis Rally to Protest at MKO Presence in Diyala Province

"Expulsion of the MKO from Iraq is a demand of all people that should be respected and obeyed," Mayor of al-Adhim town in Diyala province, Abdul Jabbar Ahmed al-Obeidi, said during the rally.

According to a report by the Middle-East Association for Defending the Victims of Terrorism, over 750 academic, political and tribal figures of the Diyala province took part in the rally.

They are even hated inside Iraq.

You can read about Mersad anniversary in Iran :

This is a proof showing Masud Rajavi and Saddam shaking hands. : 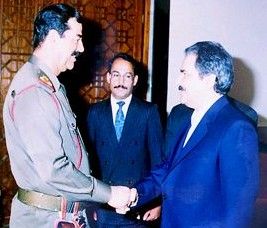 
Couldn't have said it any better myself

It's difficult to discredit or believe an article from any source from the reasons you listed. My personal opinion is that some of the stories coming out of Iran have some truth to them. I'm not saying I fully believe any of it because Iran has just as many reasons to put out propaganda as the West and Israel does, they would be fools not to.


Thanks for the input. I'm assuming you're from Iran according to your avatar and what you have said in other threads. If this is true you must have first hand knowledge of what's really going on over there. It's always nice to get a perspective from the ground level.


Do you believe the claims from the article in my OP have any truth to them?

I will understand if you don't feel comfortable answering that question, it's just I would like to get your point of view since you are from Iran.


MKO is a group of people who turned against Iranian nation after the Islamic Revolution.

So , they are the most hated group of people being expelled from Iran. ( The same as Pejak and P.K.K)

There has been a lot of documentary films about them in recent years shown in Iranian TV. Although Iranian know that they are threat to Iranian peace and unity.

posted on Nov, 29 2011 @ 01:28 PM
link
Look ats members, i know for a fact that the armed forces have been beefed up without it being made public thus allowing instant military build up under the disguise of everything but what is heading our way. So i wont beat the war drums as the trumpets have sounded and now are silent.

Simply spare a thought for those who have no idea what is to be in the first quarter of 2012. Borders are to be re-written and sadly the ink that will be used to sign new treaty's will be human blood.


Yes, they are the same organization according to Wikipedia. I can't verify Wikipedia's claims though.


LOL no worries. I had to look them up too just to make sure.

All these alphabet agencies get confusing after a while.

posted on Nov, 29 2011 @ 02:06 PM
link
CIA has been supplying the MEK and pushing them to carry out cross-border terrorism into Iran from Iraq ever since it was conquered.

I also learned some interesting history today. Turns out that during the Bush Sr. era, the CIA backed the Kurdish uprising against Saddam only for the US to turn to Saddam's side. It could be said that if this uprising never happened, then Saddam's genocidal actions may never have occurred. While not directly related, I say this to highlight the history of proxy faction conflict in that region, with the "rebels" being whoever is in the West's favour at the time.
edit on 29-11-2011 by Dimitri Dzengalshlevi because: (no reason given)


I don't know much about their name in English , but they are Islamic Marxist. The same as Impossible possible.


Were you referring to when the Americans left the Kurds to defend for themselves after Kuwait was freed?

I remember seeing a video of a bunch of people in Northern Iraq who must have been Kurds who were begging the American troops to save them because once the troops left Saddam was going to kill them. But since Kuwait was free they just picked up and left after Desert Storm.


No, I'm referring to a Kurdish uprising in the 80s. The uprising also took place in Turkey. The Iraq Kurds were covered by the MSM as rebels fighting a tyrant, while the Turkey uprising was ignored by the MSM because Turkey, a NATO ally, was using American weapons to basically decimate Kurdish culture in their country.


"They are the most cruel, radical group on the planet"

Lol, hardly, biased much? They would probably treat the Iranian people better than the current regime and will probably be who moves in when someone finally goes after Iran. Some people (Dick Armey) think they were only included in the list of terror nations as a token to Iran. I only know what I read, but based on their supposed platform they sound better for Iranians than the current regime.
Here is their economic platform:


Human Rights
The NCRI pledges to uphold the Universal Declaration of Human Rights and all international covenants on human rights, including "freedom of association, freedom of thought and expression, media, political parties, trade unions, councils, religions and denominations, freedom of profession, and prevention of any violation of individual and social rights and freedoms."[1] [edit]

Economy
The council accepts national capitalism and the bazaar, private ownership and enterprise, as well as private investment. It emphasizes the need to utilize the latest scientific and technical achievements and views relations with industrial countries necessary to reconstruct Iran's economy.[1] [edit]

Freedom of Religion
The NCRI believes in the separation of Religion and State. According to its ratifications, "all forms of discrimination against the followers of various religions and denominations in the enjoyment of their individual and social rights are prohibited. No citizen shall enjoy any privileges or be subject to any deprivations with respect to nomination for election, suffrage, employment, education, becoming a judge or any other individual or social rights, for reason of belief or non-belief in particular religion or denomination."[1] [edit]

National Minorities
The NCRI recognizes the rights of all ethnic and national minorities. It has adopted a plan for the autonomy of Iranian Kurdistan, specifying that "the administration of all affairs of the autonomous region of Kurdistan," except for those related to foreign policy, national defense, national security, foreign trade and customs, "fall within the authority of the autonomous organs."[1] [edit]

International Relations
The council's foreign policy is based on independence, respect for the United Nations Charter and international conventions and treaties, good neighborliness, international and regional cooperation and non-interference in the internal affairs of other countries. The NCRI supports the Middle East peace process and is committed to maintaining and protecting peace and tranquility in the region and condemns any aggression and expansionism. The council opposes nuclear proliferation and the production of weapons of mass destruction and ballistic missiles.[1]

posted on Nov, 29 2011 @ 03:11 PM
link
thats s.o.p for them. they go in destabilise countries, commit sabotage, murder and mayhem behind the scenes while the propaganda machine sells the brainwashed masses on why they need another war.

tut.. thought the junior generals running round here beating their little wardrums knew that and understood it all part of how the west plays its little game...


Based on what?
MKO has been around since 81 and they haven't destabilized Iran yet.