So NASA has our kids watching for Chemtrails when we can do it for free. Does anyone else have any other NASA documents about chemrails>?
edit on Mon Nov 28 2011 by DontTreadOnMe because: title edit to sosurce title

I dont see chemtrail in there...at all

They arent looking for chemtrails....have you actually read the article???

"The data are most useful to help confirm the cloud scenes that we know are difficult to detect with passive remote sensing," says David Young, a NASA climate scientist who served as the first S'COOL science advisor. "You can't see through layers, so you often miss low clouds that are under high clouds. It has been useful to get these data to see how often that occurs." Other tricky circumstances for satellites are observing clouds in areas with bright surfaces, such as snow, and complex surfaces, such as mountains. Strong agreement between satellite data and student observations from snowy or icy areas helped NASA scientists confirm that the CERES instrument can in fact make cloud observations when surfaces are bright. To analyze satellite capabilities in areas with complex backgrounds, scientists looked instead toward student observations that reported clear skies. "Seeing a completely clear sky from the satellite can be a challenge in certain circumstances, given the variable background of the Earth's surface," explained Chambers. "Once again, S'COOL observers helped scientists make sure that their satellites were making accurate observations."


what makes you say they're chemtrails?

Did you perform an analysis on them to determine what makes them differ from contrails?


This is a two-fold plan. #1. Educate the kids to see what NASA wants them to see. #2. By default educate the parents when the kids go home and display their knowledge. Everyone is happy and chemtrails become the new norm.

Does anyone else have any other NASA documents about chemrails>?


Hell, you haven't supplied one yet!

Do we really need you back in the mix if that's the kind of lies you are going post?

S'COOL has NOTHING to do with chemtrails or contrails, it is a cloud observation program.


No. And again no. This is about indoctrination. It's about getting used to the idea of chemtrails. Getting to know them and like them and look for them. I know you've heard of cirrus aviaticus. Who hasn't after my promotion of them. They're clouds made by airplanes. That's what's in the picture. So let's see you come off the two-liners and legitimize them. Oh and I didn't even mention who is footing the bill for all these chemtrails that children, slave labor, are now being employed to observe for free.


It seems that you think that they only observe contrails, this isn't the case at all.

The photo in the OP is one photo of 100,000 photos, it is a given that in some, contrails will appear, they are, after all, a cloud.


Three lines. Cirrus Aviaticus, the clouds that the slave labor children are observing, are clouds created by airplanes. Unfortunately, for DOD, these clouds don't seem to properly show on radar. Let's see what we can do about that. Will we opt for photo shop/neo paint etc. or will we go for designer nano particles that will better display themselves on radar. These are the questions in the minds of the illusionists. Magic is not just for entertainment anymore.

So now every cloud is a "chemtrail." You have a severe case of nepsophobia, or fear of clouds. It must be a vvery debilitating condition.

S'COOL has NOTHING to do with chemtrails or contrails, it is a cloud observation program.

Here's an old flyer for S'cool.

It's a great way to get kids interested in science, and also provide valuable data to calibrate satellite and instrument based observations and predictions.
edit on 28-11-2011 by Uncinus because: (no reason given)

....the clouds that the slave labor children are observing......

Oh, brother!! "slave labor children". Come on, admit it....fess up. Either you were trying to be funny, or else???


Unfortunately, for DOD, these clouds don't seem to properly show on radar. Let's see what we can do about that.

Oh, and guess what? Clouds NEVER appear on radar. It is only the water in the clouds. What you would call "rain drops", if you saw them.

The tiny droplets that comprise the white layered and fluffy look to clouds in lower altitudes, such as stratus, cumulus, etc.....those do not appear on radar. Not until the density of the condensed liquid water is sufficient to reflect the radar signals back to the antenna.

And, of course, the ice crystals in cirrus-type clouds won't either. This is why satellite photos are so much more useful, in addition to the radar information. Think of the radar as a sort of "internal" look into the clouds, that not all the photographs can show.

Really....there are so many misconceptions and abject lack of knowledge on this topic, it would behoove people to take the effort to get out and get themselves educated properly.

It is my impression and opinion that the purpose of these planes creating an "X" is for the satellites to quickly locate the saturated area for observation and/or testing.
(There, that wasn't too bad)
edit on 28-11-2011 by Human_Alien because: grammar

...purpose of these planes creating an "X" is for the satellites to quickly locate the saturated area for observation and/or testing.

The patterns and angles of the contrails is purely by the various and different direction of travel the airplanes flew, when they made the contrails. It is that simple.


Come on now, if it was 1996 I might be inclined to believe you, but this has nothing to do with "chemtrails" or that paper that those Air Force scholars wrote in 1996.


Come on now, if it was 1996 I might be inclined to believe you, but this has nothing to do with "chemtrails" or that paper that those Air Force scholars wrote in 1996.

Actually one of the guys that worked at NASA suggested to me that the coverage of S'Cool in the press, along with some publicized research on contrail's effect on climate (SUCCESS, 1995-1997), might have been factors in bringing contrails more into the public consciousness, and hence inadvertently promoting the chemtrail story. 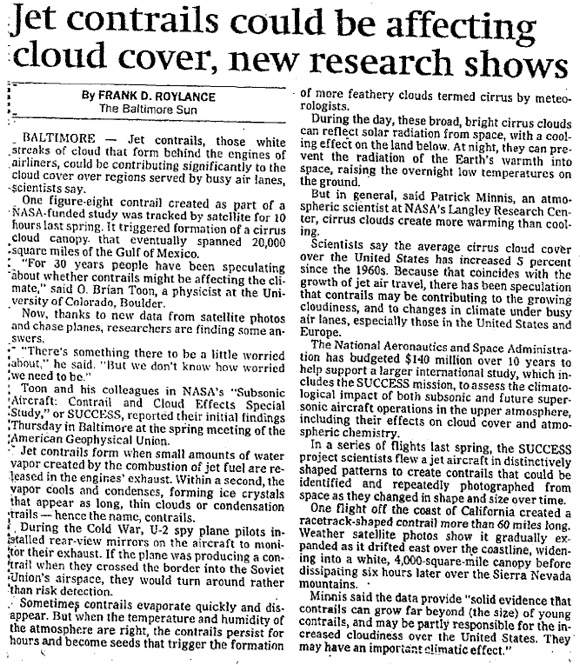 
Oh and I didn't even mention who is footing the bill for all these chemtrails that children, slave labor, are now being employed to observe for free.

Yep! I've witnessed "chemtrails" (kidding) since the late 50s'. They aren't strictly a "jet thing" either. B-29s were producing contrails as far back as WW II, so it certainly isn't a new phenomenon. There are just more of them because of the increase in air traffic.