Yellowstone Park Is Alive. Is It Too Alive Though?

posted on Nov, 27 2011 @ 12:22 PM
link
There is a long and pretty well written article in today's Billings Gazette newspaper about a report released last week by Yellowstone Park officials on more than 24 natural resource indicators that affect the park’s ecological and environmental stability including climate change and wildlife diseases.

The report also noted the park’s geological activity. The ground near the White Lake recording station has swelled 25 centimeters — more than 10 inches — since 2004, while more than 3,200 earthquakes rattled the park in 2010 — the largest concentration of tremors recorded since 1985.

Knowing what it all means, however, remains something of a mystery.

“Yellowstone seems to breathe,” said Yellowstone’s chief geologist, Hank Heasler. “That’s the best way to describe it. It goes through cycles of uplift and subsidence. That detailed pattern of ground deformation, well, we’re still in the process of figuring that out.”

Heasler goes on to make a pretty good point about earthquake activity. He says there are not more quakes now than say 30 years ago. But, the equipment to pick them up is much better. Heasler compares it to getting more phone calls now than 30 years ago. It's technology.

The park is "breathing." For instance, the ground near the White Lake recording station has swollen more than 10 inches since 2004. The Norris Junction area rose around 11 centimeters between 1996 and 2002 while at the same time the parks central caldera sank. The big question is why?

“There might be a slow inhalation in one area and an exhalation in another,” Heasler said. “We need more data to really confirm the exact pattern and cause. But there are two great ideas out there that try to explain the deformation.”

The 2 theories being thrown around by scientists are:
It could be from the vast geothermal system that lies under the park. Much like a blister under your skin, pushing on one part makes another part swell out.
OR
It could be the magma itself. Molten rock rising is pushing the ground up with it.
Personally, I myself think it's probably a combination of the 2. Especially depending on where exactly you are in the park.

Something pretty interesting in the article notes the quake swarm in the early months on 2010. There were around 2,500 quakes over a 4 month period then, the largest of which was a 3.8.
BUT
Added all together, their total magnitude was only equivalent to a 4.4.

The chief geologist doesn't see "the big one" as imminent. While they are only just starting to get an understanding of what is actually going on, he feels there is no evidence to show there is any organized buildup.

“Our monitoring not only allows us to see subtle changes, but it can also be used to predict a large eruption, or even a minor one. The bigger the eruption, the more indicators you’ll have and the farther in advance you’ll have them.”

Heasler said it’s not impossible that Yellowstone could experience a small eruption with little notice. The elements are there — earthquake swarms, ground deformations, thermal venting and volcanic gases.

He believes the buildups are not enough for a big eruption, and what is there is all over the place. There is no organization to it. It is possible though for there to be a smaller eruption with little to no notice. The ironic part of that though is the elements pointing to the potential for a smaller eruption are there. The earthquake swarms, ground deformations, thermal venting and volcanic gas releases. Exactly the same arguments being used against an impending super eruption!

All links used are from the same article today in the Billings Gazette.

posted on Nov, 27 2011 @ 12:40 PM
link
I did just find the actual report from Yellowstone. The earthquake part is really only a small portion of the report and is on page 8 of the .pdf file. Report 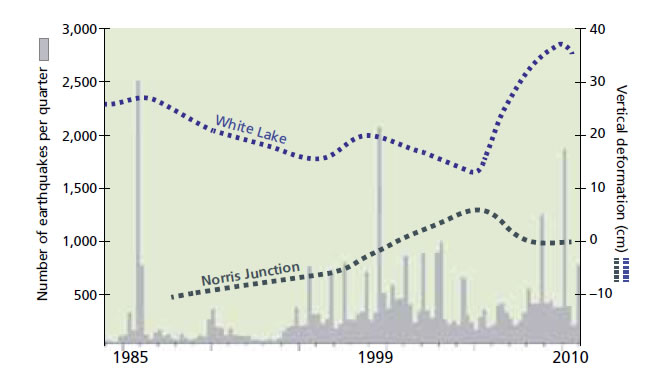 posted on Nov, 27 2011 @ 12:43 PM
link
I think as long as ground inflation and subsidence stays roughly where it has been, Yellowstone is gonna be just fine. If rapid, uncharacteristic inflation were to occur though, that's when the warning bells will go off. As a comparison, Mount St. Helens (MSH) was swelling at the rate of five or six FEET PER DAY, right before the big 1980 eruption. And MSH is nowhere NEAR the size of Yellowstone. It would stand to reason that long before it actually went off, there would be many changes like severe ground inflation and much more powerful quake swarms that would signal its readiness.

Honestly, there is nothing much discussed in that article that is new and ground breaking, or that sheds much more info than anything not already known. And especially not if you have read THE thread:

posted on Nov, 27 2011 @ 12:43 PM
link
Gosh,.
If only there were a thread on ATS completely filled with all sorts of information about
Yellowstone already....
Hmmmm
Thank you True American..for pulling that up,.
I was hoping the OP would have done some searching..
edit on 27-11-2011 by Lil Drummerboy because: (no reason given)

posted on Nov, 27 2011 @ 12:44 PM
link
The last time Yellowstone erupted...it is estimated that over 600 square miles of earth was displaced...so that being said...it would be globally cataclysmic and most of the U.S. would not live through it.

Back to the dark ages...I think I will hold out on celebrating the eruption of that caldera...the hot spot of the U.S. is not so hot!

This isn't repeating old information. This is from a NEW report just released last week. I am full aware there is a long thread about the previous activity at Yellowstone. It also encompasses an interview of the parks chief geologist apparently just done also.
Yellowstone isn't going away. I agree the signs are not there for an imminent eruption, but this is presenting some new information.
Read my post before trying to slam me for presenting a NEW piece of evidence.

On the bright side. Of course Yellowstone is 'breathing'. Our planet and it motions drive all life on it. The diversity we see echoes the intricate nature of our home.

our planet appears to be alive and many cultures will tell you it is. Where is the surprise?


Great research and writing. Thanks. Love that "breathing" analogy.

...Doesn't mean the big one isn't coming, but does help provide perspective. Fact is, nothing in this universe is "stable" - makes life exciting.


Ok, well the report itself is interesting, and worth a read.

It was the article I was saying didn't offer up much.

Certainly shows that there is a lot more going on in Yellowstone than earthquakes, supervolcanoes, geysers and hydrothermal explosions.

It does offer some insight into how many animal species are doing, and interestingly, presents a "reference condition", by which current and past conditions are measured. I found it curious that for Geology, it only refers a link to the YVO.

Funny as I was making the first post in thread, I forgot to mention I got a small spike in GEE at H17A. Those following the big thread will know what that means.

Originally posted by TrueAmerican
reply to post by webpirate

Funny as I was making the first post in thread, I forgot to mention I got a small spike in GEE at H17A. Those following the big thread will know what that means.