Monastery claims the possesion of a Scalp from a Yeti 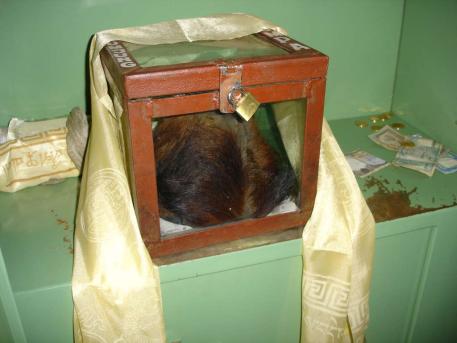 I found the picture here
It is supposedly in a monastery somewhere in Nepal. There was no additional information regarding this scalp and a search here at ATS was fruitless.

Does anyone of you know more about this?

posted on Nov, 21 2011 @ 08:30 AM
link
I've seen this thing before.
The monks refuse to let anyone interact with it other than viewing it. I think the show 'Destination Truth' got close to it, but were prevented from taking a sample for testing.
As far as I know it's just the monks claim.


yeah ive seen it before as well, not sure what show though, but the temple is named after it i think, or the temple was built for it.


This has been used in so many documentaries it's actually pathetic. I'm pretty sure at least 1 took a sample of hair and tested it and proved it was from a yak or something else non-sasquatchian, but that could have been a sample of hair not actually from that particular scalp.

Why would they lie about it? Well, having an endless stream of gullible people willing to spend thousands of dollars to visit there is probably a good enough reason.
edit on 21-11-2011 by phishyblankwaters because: (no reason given)


It's a Brucy bonus, Seriously it is one of Bruce Forsythes toupees, how it got to Napal somewhere i do not know, but it is there. I am not convinced sorry.

posted on Nov, 22 2011 @ 11:32 PM
link
I am highly skeptical, because as some of you may know, there was a similar incident with a yeti hand. I believe it was an American adventurer/climber who stayed at one of these remote monasteries, and he was shown a supposed yeti hand.

This man took it upon himself to replace one of the fingers by wiring it to the hand, where it looked natural. He then brought the finger home for analysis, which I believe turned out to be a human finger. It probably wasn't very nice to steal from the monks, but he did prove that their yeti hand was no such thing.

The scalp, on the other hand, since it has hair, could be a bit different, although I doubt it is from an authentic yeti. If so, I am very curious as to how they obtained it. I remember reading about this actually, when I was very young. So this has been known for a while I believe.

Originally posted by ahamarlin
Have seen this before, its not from a Yeti. I do believe that it was the made from a Takin: Himalaya mountain goat.

Then they dyed it! Makes sense!!!