Disclosure of what exactly? In order for your question to be answered you have to be specific.

Also, try not make one liner threads, it may get you in some trouble.

Forgive the reference to the site...but it is a start!


Disclosure is a compound word made up of other words, which is taught early on in elementary school. UFO enthusiasts want to know if flying saucers are low to the ground/horizon, yes or no? Disc low? Sure?


Or maybe my math is wrong.

(sorry for the short post. But, I keep it simple )

"If you can't expain it simply, then you do not understand it well enough."
-Albert Einstein


Disclosure is everything people want to hear whether its true or not, disclosure purely serves to self-satisfy those who seek it

posted on Nov, 19 2011 @ 08:40 PM
link
Let's see. We have information and false information (disinformation). People want closure on the UFO question. Instead of closure, we get false closure (disclosure).


With the current fodder being pushed through, disclosure is comedy - unfortunately... 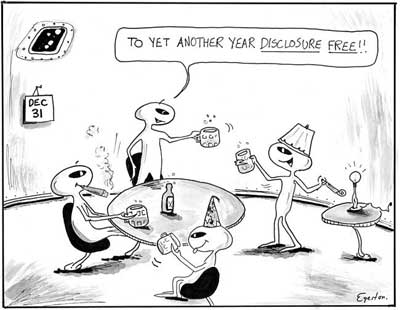 posted on Nov, 19 2011 @ 08:49 PM
link
In the context of most ATS threads that use the term, it refers to the government coming clean and telling the public that aliens exist.


Something that will never happen!!

posted on Nov, 19 2011 @ 09:31 PM
link
Conserning some people on the ATS, disclosure of ANY kind will be irrelevant.
"They´ve had contact with ET´s, but they are not
those pink bunnies i KNOW are piloting those ships?
DIS-INFO!
PUPPETS OF TPTB!!!
edit on 19-11-2011 by LionOfGOD because: grammar correction.

posted on Nov, 19 2011 @ 10:48 PM
link
Disclosure is a concept introduced into the social fabric by TPTB in order to prevent most people from living the realization that this planet is indeed experiencing interaction with extraterrestrials and/or extradimensionals.

For TPTB, as long as true realization of something doesn't reach a sort of "critical mass" within the context of shared consciousness, it doesn't exist.

For example, one thing that TPTB want to exist is fiat currency to have a value when in reality it doesn't.
However, enough people live in a "realization" that it does that...voila...it magikly does.
TPTB think they have the power of God so they like to "create" things but anybody with any sense can see that all their "creations" are merely counterfeit (which shows where their allegiance is).

So....they have "created"...."no such thing" as ETs/EDs, in part, by using a combination of social devices one of which is the idea that "official disclosure" is something required for the population at large as an "important" step to take.

posted on Nov, 19 2011 @ 10:59 PM
link
Disclosure as of now is being taken for a ride by Aliens after the U.S government finally admits there are Aliens. And the world unites and money gets abolished. Much like Star Trek. And we get to visit the Moon, Mars and countless other planets along with those Aliens doing the driving for us
edit on 19-11-2011 by radkrish because: (no reason given)