Ron Prosor says he arrived at a luncheon for leader of France's extreme-right party by 'accident' and left immediately; French media, however, reproted that Prosor stayed for 20 minutes and shook Le Pen's hand.

Israel’s ambassador to the United Nations, Ron Prosor, said over the weekend that his attendance at a luncheon for Marine Le Pen, the leader of France’s extreme right-wing party National Front and presidential candidate, at the UN Headquarters in New York on Thursday was a "mistake".

"It was an event that I wasn't supposed to be at to begin with, and I got there by accident. When I realized my mistake, I immediately left the event,” Prosor said after the event.


For those who don't know, the NF, the party in question, has neo-nazis running as candidates... Marine LePen is even banned from Israel.

Le Pen herself was quoted by French news agencies on Saturday, saying that the Israeli ambassador’s presence at the event “was not an error.” According to Le Pen, “Please, no one actually imagines that the ambassador burst through the wrong door.”

The National Front leader added, “It is impossible to converse with Marine Le Pen for 20 minutes without knowing who she is.” According to Le Pen, “There was nothing unclear or ambiguous about our meeting.”


The Israeli ambassador will lose his job this week over this ``mistake``...

posted on Nov, 6 2011 @ 04:14 AM
link
he meant he made a mistake getting spotted at the luncheon by the media..
they probably toasted hitler and had a few laughs comparing notes on how to commit crimes against humanity and genocide...


That would be this photo here... 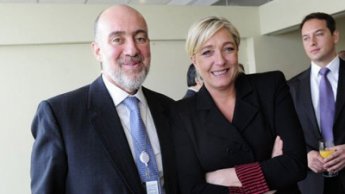 Yep, he looks totally horrified and is stuggling to get away. I see that now.