From the Jungle of Guatemala, a photo that prove of an Alien contact with Maya in ancient times?

The filmmakers behind "Revelations of the Mayans 2012 and Beyond," who said that their film will reveal evidence of contact between the Mayans and extraterrestrials, have now released to TheWrap what they claim is photographic evidence of a pre-Mayan, alien civilization. 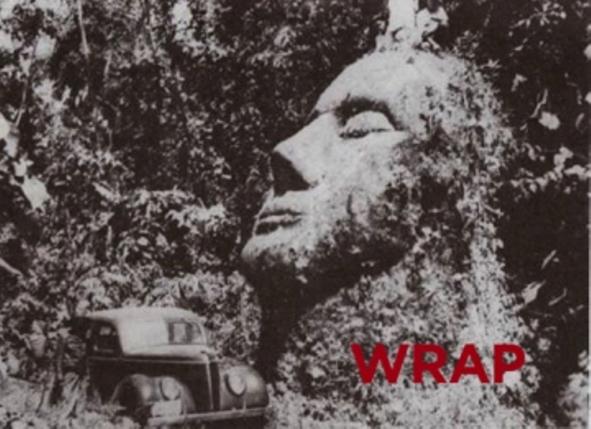 Producer Raul Julia-Levy supplied this photo, which he says was taken in southern Guatemala in the 1930s, showing a head carved in the jungle.

The monument , according to an accompanying letter by archaeologist Hector E. Mejia, dates back to between 3500 and 5000 B.C. and is evidence of a superior civilization unlike any known to have lived on Earth.
Mejia described the photograph as being "of a bust which a first glance can be seen to have an elongated cranium and fine characteristics which are not consistent with pre-Hispanic races of America."

"I certify that this monument presents no characteristics of Maya, Nahuatl, Olmec or any other pre-Hispanic civilization," he wrote. "It was created by an extraordinary and superior civilization with awesome knowledge of which there is no record of existence on this planet."

Originally posted by Arken
This is big. If this photo is real, then we must rewrite the human history on this planet.


The photo is hardly worth rewriting history for...we see many megolithic structures of heads etc, what makes this one so special?

He also claimed government conspiracies surrounding the photo, and the head it depicts: After the photo was taken in the late 1930s, he said, it was only published once, in a magazine that was then immediately withdrawn from circulation by "the government of England."

who is this characture carved in stone? why only published once?

Is there ANY WONDER why the "alien" crowd here gets no respect or credibility at all? Its threads like this that contribute to that.

PS: The strange craft that folks mistaken as "out-of-this-world" "alien" craft are simply OF-THIS-WORLD craft with human pilots. Technology that you'll hear decades from now once theres even better tech to hide.

History shows this already time and time again that the public doesnt know about the technology until its almost obsolete...

Saying that these modern craft is piloted by "aliens" is as foolish as claiming that our fighter jets and commercial airliners are being piloted by aliens and not humans.

So get a grip you alien folks. Until you speak with one, you have NO EVIDENCE OTHERWISE.

Originally posted by Viking9019
How do they intend to prove that the Mayans had contact with aliens with THAT?

It seems alien folks are getting desperate with all kinds of silly nonsense lately.

Not sure who is more comical, the bible thumpers or the alien crowd.

Get a GRIP folks!

posted on Nov, 5 2011 @ 04:34 AM
link
The picture shows a car... in the jungle of 1930s Guatemala. Think about that. Could this car... looks like a Ford or Willys sedan actually go to some obscure jungle local? Would not a truck or some specially fitted car for expeditions be used. That means a road... not a path or some hidden mountain trek, but a road.

That being so, the monument/ head should still be there. It was there 5000 yrs ago.... why not now? There has to be some documentation some where... and Guatemala is a country, but it ain't that big.

Frankly, I think it a fake. The face resembles the stylized human "face on mars" and the car is conveniently shown to set a time frame. Hard to believe a person was not also shown...kind of a look what we found moment. Most archeologist and discoverers want to be in the frame as a salute in infinity of what they found.

Even in the 1930s... most travel in Central and South America was by burrrow, donkey, horse... heck, just got back from Yucatan,Mexico this summer, and off the main roads... road travel is treacherous at best. I have read too many accounts of the Banana Wars and Chesty Puller and US involvement.... actual documented history... that illustrate just the circumstances are questionable at best... and only one or a few pictures?


Yeah, and I used to be in the SAS, and can kill a man with one punch.

posted on Nov, 5 2011 @ 04:51 AM
link
reply to post by Arken
This image is linked in to the same band of 'ancient aliens' guys who frequently support dodgy claims. This time it's Hatcher-Childress who makes the claim that this giant head is evidence of a 'lost race.'

Sadly, he claims the head has been destroyed by armed rebels and there's nothing left of it. Shame! Despite actually going all the way there and seeing it with his own eyes, he and the team of fellow 'ancient aliens' researchers didn't manage to take a photograph or capture film footage of this object - ruined or not.

What does this leave us with? It leaves a photograph with no provenance that showed up in the 21st Century. It could be from anywhere and could be very recently made. The claimants that the head was a genuine object have spent money on a South American expedition (1000s of $$$$) and somehow haven't gotten evidence that it ever existed despite claiming to have seen it.

posted on Nov, 5 2011 @ 04:58 AM
link
Just had it brought to my attention there are people in the photos. My mistake... however comparing the resolution of the individual standing by the car versus the people on the head, the crispness and contrast of the car against the statue versus the lack of contrast elsewhere in the photo... and again the circumstance... I still question the validity of the photo.

On the other hand, if I knew so darn much, I would be running ATS... and obviously I am not. At best, it illustrates what I have come to believe and have stated. That there have been previous civilizations that equalled or exceeded our own and as we appear about to do... have gone into decline and become the basis of myth and legend.


This image is linked in to the same band of 'ancient aliens' guys who frequently support dodgy claims.


Yet you instantly take this and use it for conclusion...


Sadly, he claims the head has been destroyed by armed rebels and there's nothing left of it. Shame!

the article goes on to say this


the head depicted in the photo, 17 meters (51 feet) tall and six meters wide, is no longer in the Guatemalan jungle but has been moved to the United States and hidden.

"I was informed by officials in the government of Guatemala that the U.S. government brought it here," he said.

So its all a bit micky mouse at the moment hmm?

posted on Nov, 5 2011 @ 05:09 AM
link
It will be interesting none the less and what ever twist they put on it still shows a head in the jungle . What I found odd was the actual shape in comparing it to other heads that have been carved on temples . For one the nose is totally different along with the eyes and mouth . Alien ? Or perhaps travelers from another continent ?

There is however this that is just as odd as the head in the jungle .

Not to take away from the OP but there is some strange crap being discovered all the time . Odd how the Ancient Alien people have not used it in their theories that I have seen ( series )
edit on 5-11-2011 by watchdog8110 because: (no reason given)

posted on Nov, 5 2011 @ 05:15 AM
link
reply to post by grindhouzer
The evidence that this stone head 'photo' is a fake is, in part, thanks to quotes like yours. If you spend a few moments reading the various stories and claims associated with this alleged head, you'll find they don't match.

It's been destroyed by rebels, it's been damaged in an effort to remove it and it's been taken away and 'lost.'

In essence, the photo is surrounded by claims from people who are all loosely connected in the ancient aliens market. The claims themselves actually amount to nothing more than the 'dog ate my homework.'


youe first link says it's from renovations in more recent times...but 1922? really? they still didnt have space travel in the twenties, at least not that i'm aware of and i've seen that other picture on the show ancient aliens


Originally posted by Arken
This is big. If this photo is real, then we must rewrite the human history on this planet.


Why it's "obviously" a human head?? First off there's NO WAY of ancient natives of Guatemala have cut that head with laser precision, transported and placed into the middle of the jungle. That head must weigh around 20, maybe 30 tons, and we don't even know if there's a body of the rest of the sculpture buried in the ground, like some heads of Eastern Island. Plus it's obviously a Caucasian like face, which fits in the depictions of the "star gods" who taught civilization to ancient Meso American civilizations. The most famous of those "star gods" were Viracocha, Kukulkan aka Quetzalcoatl, Manco Capac and Mama Occlo and they were reportedly coming from the stars. Quetzalcoatl was identified by Zecharia Sitchin as the same Egyptian "god" Toth.

Course I don't expect shills and skeptics giving any credit to these explanations, I'm just keeping the open-minded people informed.

Originally posted by 1AnunnakiBastard
Why it's "obviously" a human head??

because it looks exactly like one? Why do you think it is not?

First off there's NO WAY of ancient natives of Guatemala have cut that head with laser precision,

Who claims it was cut with "laser precision? Source for that claim?

transported and placed into the middle of the jungle

How do you know it was transported? Source for that claim?

Quetzalcoatl was identified by Zecharia Sitchin