Man With Half a Head

Wanted to share this find with you guys : Came across this interesting article - with a mugshot of a man with only half a head. I thought this story was a hoax at first but found that this story and man are real! Dug a bit, and found an actual vid of the guy with half a head....

The brain has always fascinated me. I can not imagine how he even functions normally. IMO, this guy is a walking miracle. .I would love to hear the rest of his story (the medical aspect -not the prostitution part lol)... Anywhoo... this is the reason for the thread. I found this man with half a head news very fascinating.


Police arresting a man for allegedly soliciting prostitution in Miami earlier this month ran into a bit of difficulty when they got him back to the station.
It was not a matter of him resisting arrest or being uncooperative. Nor did it have anything to do with his identification - he provided his name and other personal details, and submitted to fingerprinting and a mugshot.
The trouble started when they got to the part in the paperwork that requires them to note 'unique physical features'.
The suspect had an unique physical feature alright... no forehead!
The mugshots, especially the one of the suspect in profile, shows why the arresting officers were left scratching their normal heads for a proper description.


Man with half a head is real.

posted on Nov, 2 2011 @ 07:55 PM
link
Quite a bit of people with deformities and abnormalities that seem to still be able to function. What's amazing to me is all the people I know with no deformity that are completely useless. There's a ton on ATS, ;-). Just kidding.(?)

The human brain amazes me too. I have a friend that lost a good part of his brain and skull in a car accident. The part of his skull that he lost was replaced with metal and plastic surgury.

He was, after a lot of therapy able to relearn things with the other side of his brain, and it was amazing to watch his progression. Unless you knew what he went through, you would never know.

posted on Nov, 2 2011 @ 08:04 PM
link
The guy was smoking a blunt. He has half a head and was participating in illegal drug activity, online. That their tells you it's true that he has half a head. Secondly, it also tells you what kind of friends he has. Do they think he is exempt from the law for having half a head? I question that.

posted on Nov, 2 2011 @ 11:11 PM
link
The guy obviously has very little frontal lobe, which is responsible for controlling impulses (like addictions and compulsions - so I'm not surprised to the see the constant pot-smoking), having empathy, and controlling anger. Most people with frontal lobe issues (either congenital or accidental) tend to be easily triggered to violence and other anti-social problems such as angry outbursts and sexually deviant behaviors. This case, however, is the first time I've seen it was so visually obvious. Whoa!

LOL I wasn't really paying so much attention as to what the guy was doing... I was just amazed that he was walking around and REAL!!!

I wish a brain doc would could in here and explain this a bit for us...

Until then...
Skittles anyone? 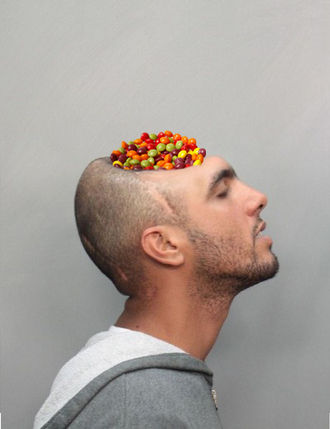 The guy at least has a sense of humor, eh?