Wake up ATS! The time to unite is now!

posted on Oct, 25 2011 @ 07:25 AM
link
I see plenty of nasty threads, nasty replies to the OWS movements that have sprung up all over. Some have accused the movement of coddling jobless 20-somethings, trust fund babies and general nuisances to society.

This is not the purpose of OWS. I see OWS as the left finally waking up to what the right has been trying to say all along (well, the original Tea Party folks that is) about irresponsible spending and the influence/wealth of the 1%.

Who are the 1%? It's safe to say that they are most certainly people who have found a way to reap the rewards of our broken financial system. This is America after all, right? I can understand making money to avoid poverty but I do not understand why certain people must have such a high amount of wealth. It becomes detrimental to society as a whole.

Who are the 99%? Some say they are the sheeple, the irresponsible spenders, etc. I want to add that this simply isn't 100% factual. I am 30 years old with one college degree and I'm currently finishing up another. I didn't go to college with ambitions of making money hand over foot. I went because I want the experience and I want to continue to learn new things as I become older. I've accepted that there will be a large amount of educational debt when I am finished. To prepare, I switched what little assets I have to a regional credit union and I've been working on keeping a lid on personal spending. I work full time as well and make a comfortable living as it is.

Not everyone out is a broke, stupid college student. These folks have a point and they are free to express that point. Can it become violent? Certainly. Should these folks be subject to name-calling? No.

I have read that some feel that the Tea Party and OWS are two completely different things. I say that both movements CAN unite on the issue of going after bankers and the power elite. I agree that we shouldn't be spending so much money on defense every year when our infrastructure is falling apart. I agree that politicians should be held to a higher standard than they currently are.

I'm tired of people telling me that I'm an idiot for backing an union where I work. I believe that the working people have a right to organize to fight the encroachment of the 1% when it comes to our wages, the hours we work and even the jobs we do.

I completely understand that some hate unions, some hate left-wingers and some hate the OWS movement. I personally hate the current Tea Party movement (hijacked by neo-cons). BUT, that does not mean that we cannot find common ground!

America is depending on us to put aside our differences and turn our attention to those who truly deserve our ire.

An America divided is an America that has already lost.

I just wanted to get my thoughts out into the open. I no doubt understand that people will come along to leave trollish comments. That is something I must accept.

Thank you folks.
edit on 25-10-2011 by The Sword because: added a clarification on the Tea Party as it currently stands

Originally posted by The Sword

I just wanted to get my thoughts out into the open. I no doubt understand that people will come along to leave trollish comments. That is something I must accept.

Perhaps if people were united as to what these occupy events are aiming for, there wouldn't be comments that disagree with yours.

There are no clear cut reasons that I have seen for any of this. It's just seems to be a lot of people gathering to sit in Santas lap with a long, unclear wish list!

People need to get it together and agree about what they want exactly on their wish lists, or this is will lead to absolutely nothing!


Have you talked to anyone in this movement? You don't sound like you've tried to and you're going by what the MSM is telling you.

This is exactly the kind of comment that I'm talking about.

posted on Oct, 25 2011 @ 07:42 AM
link
I agree 100% !
I can't help but find it telling the lengths the media goes to, to constantly highlight and magnify the differences among-st us.
United we stand, divided we fall.

Originally posted by The Sword

Have you talked to anyone in this movement? You don't sound like you've tried to and you're going by what the MSM is telling you.

This is exactly the kind of comment that I'm talking about.


Yes, as a matter of fact I have talked to people at the local occupy event in Phoenix. I get quite different answeres depending on who I ask.

If you wouldn't mind, since you started this thread, and seem to be an expert on uniting this movement, in your own words, what exactly is the purpose of this movement?

As I said, depending on who you talk to, lot's of folks give different reasons for participating. There is not one set goal for doing this, at all.

2 people standing next to each other at one of these rallies might have a completely different understanding of what it's all about.

What exactly is the road map here, and what are we all supposed to be united about?

posted on Oct, 25 2011 @ 07:45 AM
link
OWS has to star getting street smart about the globalists not the distractions like corporations, capitalism, and taxes. The globalists will be there to replace it if that were the case.

An America divided is an America that has already lost.

no, too busy trashing or supporting OWS.

Most of the people against this would actually benefit from it, just like actual socialized medicine (not Obamacare)


Since you asked for something, I'll give you something. It's not the definite goal of OWS but there are some things that I agree with.

posted on Oct, 25 2011 @ 08:02 AM
link
You do realize that ATS is not only about America?And there are people from other countries?


Thanks for posting that link. My thought is that since all these movements are not on Wall Street, that is where people are altering the original goals. For instance, in AZ a lot of people are there to rally against the illigal immigration bill.

So, it seems that the list of demands can be demographically altered, thus watering down the original reason for the movement.

posted on Oct, 25 2011 @ 08:09 AM
link
The Occupy movement only highlights how ineffective we are against the giant before us, and it will simply be used as an excuse. I personally believe they are brave, if foolish, and will be remembered. Especially when it gets ugly. I hope people will realize it wasn't the protesters fault.

If it were just about calling attention to corruption, then they'd be marching on the steps of the capital and the White House as well.
But it's about class warfare. Haves vs. have-nots.

That is, until the have-nots actually "have". Then any class war will be suppressed.

I've had debates with OWS folks that have wanted to end currency, end capitalism, just raise awareness about life, class warfare, greedy CEO's, greedy rich. . . prety much crickets when it comes to politicians.

I'm not for corruption. But don't paint me as a follower of a group that enjoys endorsemeents from the DNC, unions, socialists, communists, CAIR, ad nauseum. 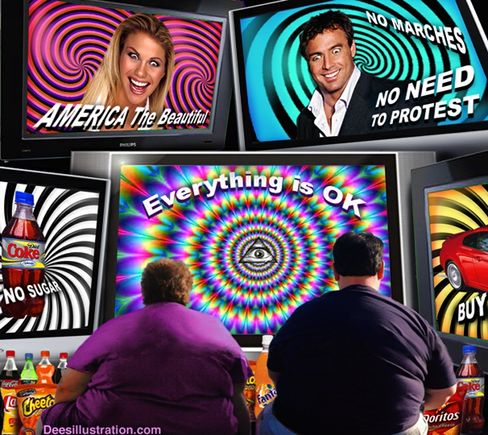 Don't protest but do as you are told to...and why isn't your programming device(TV) on ?
DHS doesn't like that and you will be added to the naughty list !

Perhaps there are many statements from the OWS and not a single consensus per se.

What the American people are facing and are subsequently protesting about are all manifestations of the same broken economic system.

But we are supposed to do as we are told and to keep our Televisions on, selected to our favourite subliminal programming whilst stuffing our face with artificially flavoured "Snack Food" followed by neuro toxic Diet Cola and remain complacent and quiet.

In other words, thou shalt remain Fat, Dumb and Happy !


edit on 25-10-2011 by nh_ee because: Live Free or Die - General John Stark, the state's most distinguished hero of the Revolutionary War.

Well, it was worth a try.