It was originally seen in the North East sky and moved to the South East sky, where it started glowing blue and faded away at 8:45 p.m.

It is not Venus, as Venus, though visible during daylight this month, appears early morning. It is also not the ISS or Endeavor, as they were docked together, and were only visible that day over Asia.

It is also not Saturn. Although Saturn was visible during sunset this month, the light pollution and air pollution of this area at the time would have made it impossible to see at that time. It also appeared much earlier than Saturn, and faded from view much earlier than Saturn, which should have been visible until near sunset. The direction it was first spotted, which was North East, does not fit the orbital location of Saturn at the time, which would put Saturn in the South Eastern sky.

The object also had a slightly erratic flight path, unlike that of a planet or star. It is also oval shaped and bears a shadow on its bottom. If it WAS Saturn, or any planet, it's shadow would not be located there, considering the sun was hanging low in the sky, although not yet at horizon level.

My sources are Stellarium, Astronomy.com's StarDome and Google Earth which I used for exact directions, altitudes, and orbital information.

It is also not Arcturus, which glows yellow - orange in daylight and at night.

According to Stellarium, with an ocean landscape to simulate sea level (Fairfax is 312 above Sea level) and being set to Perspective mode and Equal Area mode, Arcturus would have only been directly North East at 4 p.m. Not only would I not be able to see it with this much daylight, it would be below our roof, right under the horizon, effectively out of sight completely. Even at 6 p.m. Arcturus would be directly East. At 6 p.m. the Object was North East. Saturn would be even farther to the right, and lower.

The object did not follow any ordinary orbits or stars or planets.

This video is not edited. I didn't know how to use the camera at first, so I didn't know I was recording in the beginning plus I felt that editing it would decrease credibility, so I left it unedited. And please excuse my language. My brother was being very annoying.

What I find very strange is that usually when a planet or bright star is observable during the daytime, they are usually mistaken for a UFO, and the reports pour in on MUFON and elsewhere. This is not the case.

I have emailed various astronomers, many from Astronomy.com, and they two are perplexed about what this might have been. They have not seen the video though. They have just been told a description. I wanted them to actually respond to me, so I didn't say it was oval shaped or that it moved UNLIKE a star or planet. I'm also pretty sure it is not a weather balloon, considering I observed it for two evenings in a row, and I also assume that a weather balloon would move a little faster being that high and closer to faster moving air currents. Also, it would have to be a huge balloon.

The original dvd quality video is now on MUFON

Now reason 4 may have been human error on my part and my family's part (my mom, my brother, and me).

At 8:43 it faded completely from view. About a half hour before a single star came out.

I've ruled out iridium flares because we observed it for over an hour. If it was a balloon, it was doing an amazing job staying so still for that long. It was not an airplane, in fact, we saw high altitude jets fly under it.

I think it may have been a planet. MAYBE. Only because it was that visible for that amount of time, but then again, I think it would have continued to be visible the rest of the night.

Perhaps it was a UFO. This is not the point of the thread. I need to find out what it wasn't.

So long story short, is there anyone in Virginia, preferably in the Fairfax area that saw this, or anyone that know what it could have been?

Was there a planet today that was visible only during those hours?

Update as of 2:56: Venus has been ruled out. The ISS, which is docked with the Shuttle, was not visible in North America yesterday. It *may* have been Saturn, but it was not visible throughout the night like it should have been. Also it did not move in a straight, or orderly line.


I would say you were probably seeing Venus .

Venus? Yes. When Venus is bright and far from the Sun in a clear sky, you can observe this planet in broad daylight with the unaided eye.

Originally posted by Konstantinos
I'm assuming that you managed to get some footage since you observed it for an hour (photo/video)?

Indeed we did. Tripod aided too. I have to edit names out though, and am unfamiliar with what to use for that.

Also, is Venus known for having an erratic orbit? We saw it, it moved vertically over time, then moved to the right, and it seemed to move vertically yet again after that. When I say moved, it seemed to move fastest at first, with a very slow speed throughout the entire sighting, and it then it eventually faded out at 8:43 p.m.

Originally posted by gortex
reply to post by SubPop79


I would say you were probably seeing Venus .

Venus? Yes. When Venus is bright and far from the Sun in a clear sky, you can observe this planet in broad daylight with the unaided eye.


If I am reading that link correctly, I should only be able to see Venus in daylight, during the morning of June 8th.


Sorry , just checked around and it's more likely to have been Saturn .


May 2011 features one of the best months of the year to see the ringed planet Saturn. In fact, Saturn is the lone visible planet to bedeck the May evening sky,

Originally posted by gortex
reply to post by SubPop79


Sorry , just checked around and it's more likely to have been Saturn .


May 2011 features one of the best months of the year to see the ringed planet Saturn. In fact, Saturn is the lone visible planet to bedeck the May evening sky,


Gotcha. Still, according to that, yes Saturn would be visible at that time, but it would remain visible throughout most of the night. I watched the object I'm speaking of fade from view promptly at ~8:40 p.m. never to be seen again that night.
edit on 30-5-2011 by SubPop79 because: (no reason given)

1) Star (can be seen at dusk)
2) Planet (already stated Venus & Saturn)
3) International Space Station (I just read the other day that the ISS would be clearly visible to the naked eye this weekend.) looking for link.

1) Star (can be seen at dusk)
2) Planet (already stated Venus & Saturn)
3) International Space Station (I just read the other day that the ISS would be clearly visible to the naked eye this weekend.) looking for link.

Venus has already been ruled out, apparently Saturn CAN be seen in the evening during this month, but this object faded away after an hour whereas Saturn should be visible throughout the night, and the ISS, which is docked with the Shuttle, was only visible in the skies of Asia last night.

And if someone can point me in the direction of a good, free video editing software, I can upload the video. I could do so as of now, but I want to edit out names, and possibly cuss words.

posted on May, 30 2011 @ 02:20 PM
link
Yeah looking forward to the vid too. The editing out the names would be pretty easy in sony vegas pro, or something similar. Don't know what edditing package you got, but just shout out and I'm sure we'll be able to give some pointers in editing out speech.

posted on May, 30 2011 @ 02:30 PM
link
Just a word of advice.....it would be best to do absolutely no editing to ensure the authenticity of your video. Upload straight from the camera....

Other than that, you may want to check out these sites to see what stars/planets and satelites were above you at that time/date:
Stellarium - search for stars and planets
Search for satellites here
Search for the ISS+ here

Originally posted by greeneyedleo
Just a word of advice.....it would be best to do absolutely no editing to ensure the authenticity of your video. Upload straight from the camera....

Other than that, you may want to check out these sites to see what stars/planets and satelites were above you at that time/date:
Stellarium - search for stars and planets
Search for satellites here
Search for the ISS+ here


I understand what your saying. But if I undersand what the OP is saying he probably wants to edit out spoken family names to keep anonymity.

I was thinking along the lines of a simple drop in volume at certain points. Nothing major.

But I do understand where you're coming from Mod.

posted on May, 30 2011 @ 03:50 PM
link
Ok, the video is up, and I have a picture of where it was first seen, but it was taken after the fact for a visual aid. To retain some level of anonymity, this link is visible only to those with the link, and not the general public. Yet.

The object is seen toward the last quarter of the video, at 2:56.

Also, Please forgive the extreme rawness of the video. I lack editing software.

Since it was still daylight, I blackened the sky for a better view of the stars/planets: 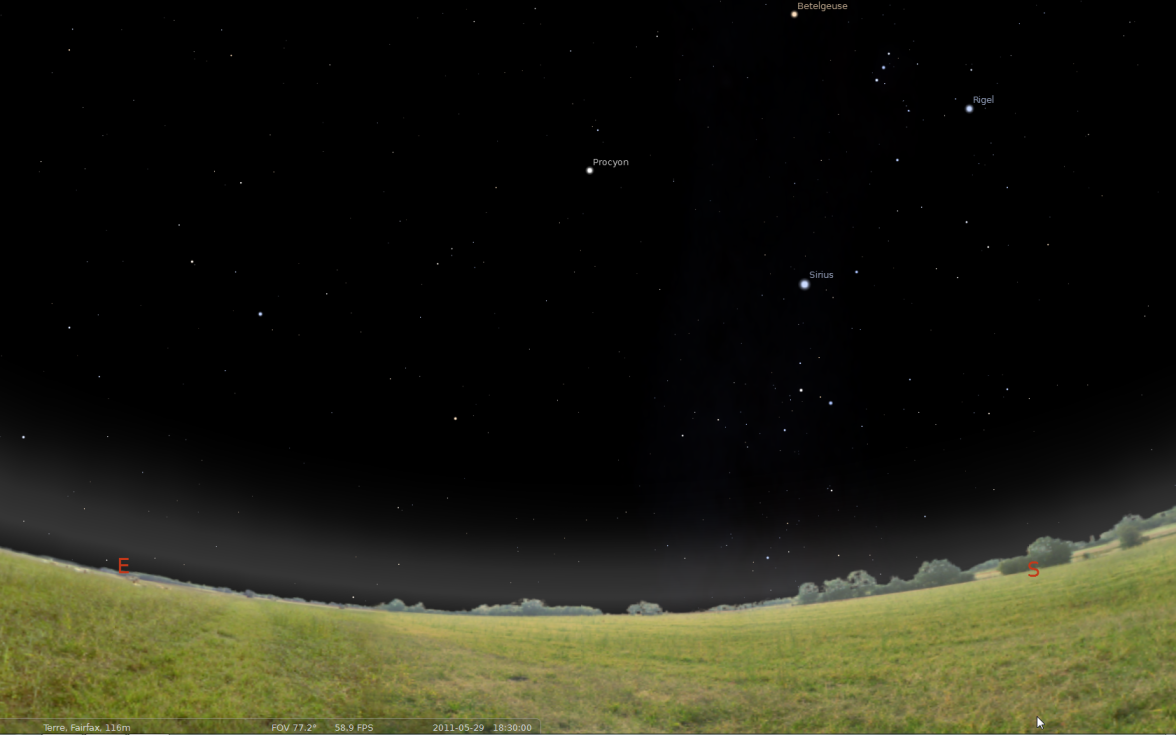 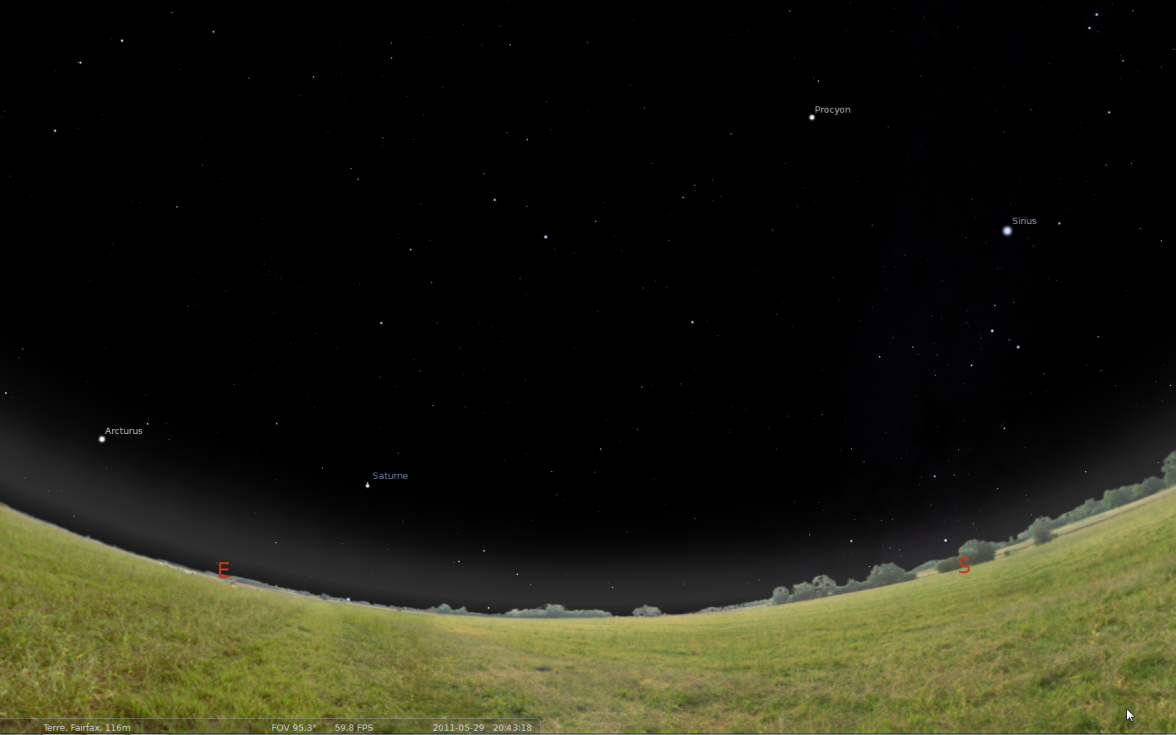 In the OP's video, this object looks like a "solid" object, with a small lower shadow .

Originally posted by SubPop79
Wow what program or website is that? And thank you for your input!

I used Stellarium, see the link given by Greeneyedleo above.
edit on 30-5-2011 by elevenaugust because: (no reason given)

Originally posted by SubPop79
Man I sound like a dick in the video. My brother was really annoying me though. Brotherly love?

"of course it's not a sun thats the dumbest thing i've ever heard!"

LOL I loved it. good catch there, when you said it doesn't look like much on camera, it doesn't but a catch nonetheless.

posted on May, 30 2011 @ 08:20 PM
link
Well...I downloaded Stellarium (amazing software), and I looked up Saturn...guess what is back tonight EXACTLY where Saturn is. I'm just perplexed that we were able to see it with so much light pollution. And the fact that it faded from view. I'm still not totally convinced though because of that.