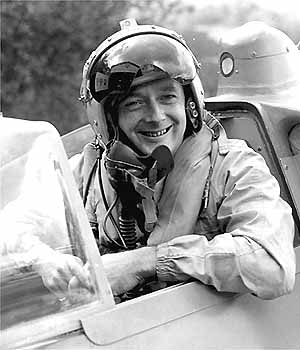 Donald Campbell CBE was the obsessive holder of world land and water speed records and died in Coniston lake on January 4 1967 while trying to break his own record.
Possibly striking a log the jet powered Bluebird had disintegrated at around 300 miles an hour.He is said to have yearned to emulate his father Sir Malcolm Campbell, in setting speed records on land and on water.


He had broken the world water speed record seven times in 10 years when the accident happened.
Having hit 202.32mph on Ullswater in July 1955, he bettered it on December 31, 1964, at Dumbleyung Lake, Australia when he reached 276.33mph.
His penchant for record breaking brought him back to Coniston for a final time.
His last reported words heard over the intercom were: ěSheís going, sheís going.î

In December 2000 divers testing underwater cameras came on the wreckage. Underwater surveyor, Bill Smith found the wreck at 150 feet half buried in silt. Donald Campbellís body was never found at the time of the tragedy. In March 2001 Bluebird was recovered from the lake bed . Campbell's widow Tonie Bern Campbell, 64 watched it emerge from the lake. The tail was undamaged but the front cockpit area was completely crushed.
The Coniston Institute and Ruskin Museum Charitable Trust now want to provide a permanent home for the remains of Bluebird and are seeking permission for a 10m by 10m extension to the Museum to house it. The application is supported by a letter from the Curator of the museum stating that Bluebird is part of Conistonís heritage and the people of Coniston "believe most strongly" that the craft belongs in the town as a "permanent memorial to a great British hero".
In August 2001 the Barrow in Furness coroner decided that based on DNA evidence the remains found near the wreck of Bluebird were those of the late Donald Campbell. His daughter, Gina Campbell, 51, from Leeds, can at last officially hold an official service following the loss of her father, who died when she was just 17.
DNA tests taken from her and compared with the remains found in the water were confirmed as matching.


The funeral service at Coniston Parish Churchyard took place in September 2001. Donald Campbell has finally been given a permanent headstone on the edge of Coniston Water 35 years after his death. Family, friends and those involved in the salvage of the record-breaking Bluebird, were present at the moving service in St Andrew's Church, Coniston.
The headstone features a carved bluebird and replaces the temporary stone, which has been moved to the Bluebird Cafe. The salvage team is to bring back a fully working and faithfully
restored Bluebird and house it in Cumbria but lacks the funding.
The restoration project could take up to three years. 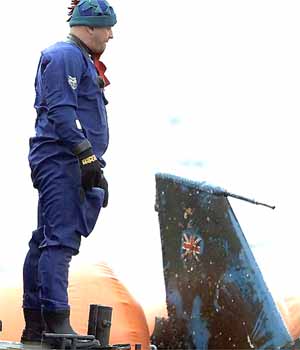 The Bluebird was recovered from the lake in March.

BluebirdÖ Most famous car in the world!
Length:30 feet. Weight 5 tons. Horsepower: 2,500 Rolls Royce super-charged V-12 engine. Sir Malcolm Campbell's top recorded speed of 330 miles per hour was established in 1935 at Daytona Beach. This fabulous car is visited by a multitude of fans throughout the year at the Museum of Speed, Daytona Beach, Florida.


Of all the Men of Speed, none was more celebrated than Sir Malcolm Campbell.
There are many who established land speed records, but none so often or as prodigiously as he. By 1935, on the Bonneville Salt Flats in Utah, he became the first man to eclipse 300 miles per hour in a "Bluebird" car powered with a Rolls-Royce airplane engine.

Campbell was born in Chiselhurst, Kent, England, the only son of a Scottish diamond merchant. While in Europe studying the diamond business, he became a bicycling and motorcycle enthusiast. For three years straight, he won a London-to-Edinburgh motorcycle reliability test.

By 1910, he had his first car, which he promptly named "Bluebird." By 1924, a "Bluebird" powered by a 12-cylinder Sunbeam engine took Campbell to his first official international land speed record of 146.16 miles per hour at Pendine Sands on the barren coast of Wales. A year later, he upped the speed to more than 150 mph.

He wasn't the only man in quest of records, however. Among his challengers was England's Henry Segrave. Segrave went faster than 156 mph in 1926 and the record continued to escalate from there, broken by other daring men.

Campbell was in South America preparing for another record run in 1929 when Segrave set the record of 231.44 mph at Daytona. Unable to beat that in South America, Campbell returned to Daytona in 1931 with a "Bluebird" and an aircraft engine. He hit 246.09 mph to establish the record. He was knighted that same year.

Before his death in 1948, Campbell saw many men beat his land speed record. But none was more honored or widely recognized as he. In his time, he became the very symbol of man's quest for excellence

Donald Campbell used two different cars in his Land Speed record attempts. The First was destroyed in a crash at Utah in 1960.The second was similar to the first but it had a tailfin to help stabilise the car.The body had an internal framework of honeycomb type aluminium alloy structural panels.It was powered by a Bristol Siddeley Proteus 705 gas turbine engine. All four wheels were driven and benefited from fully independent self-levelling suspension. They were able to turn only4 degrees of lock each way. Suspension and damping was provided by Girling oleo-pneumatic (nitrogen) struts. Special equipment included a hydraulic, built-in jacking system, instrument telemetry and electric fans to cool disc brake assemblies.


At the time of record attempts there was also self-contained breathing apparatus in the cockpit and a camera pod mounted on the tail.The first World Land Speed Record attempt test runs took place at Bonneville Salt Flats, Utah, USA, on the 5th September 1960. Donald drove the car on two trial runs, going through the measured mile at 124mph on the first and 172mph on the second. Unexpectedly, Bluebird's recording and communication equipment was rendered inoperable in the vast static electricity receptacle of the salt flats.During the first run on 16th September 1960, Campbell drove Bluebird at a speed of 300mph. Pleased with this performance, he decided to make an acceleration test on the next run. During this second run, there was a terrible crash. Bluebird was travelling at an estimated speed of 365 mph, attained within 1.7 miles, this was the greatest acceleration ever achieved by a four-wheeled vehicle. Unfortunately, a gust of wind blew it on to a soft patch of sand, causing the car to skid for 300m, then spin, until it finally flipped over and touched down four times before stopping. Campbell suffered a fractured skull, together with minor injuries. Bluebird's engine and other components were unharmed, though the body and suspension were beyondrepair.

Bluebird was then shipped to Australia for futher record attempts. Test runs were made at Lake Eyre, South Australia, in May 1963 and June/July 1964. After lengthy set-backs due to unseasonably wet weather, Campbell piloted Bluebird to a new World Land Speed Record of 403.10mph on 17th July 1964. His speed in each direction was identical, despite the many variables in surface and wind strength.