As many of you know by now, we recently had the pleasure of hooking up with the one and only Robbie Williams at the Gilliland Ranch in beautiful Trout Lake, Washington.

After reading many accounts from what has been termed, "credible witnesses" (airline pilots, engineers, etc...), related to strange experiences and sightings at the base of Mount Adams (and the ranch owned by James Gilliland) we decided it was time to take a look for ourselves and our membership.

While planning this excursion it occurred to me that it could be a great opportunity for us to sort of "repay" Robbie Williams for his gracious acknowledgment of AboveTopSecret.com being a haven for the free flowing discussion of the Alien/UFO phenomena with as much critical thought applied as the topic allows. We invited him to join us at the ranch and participate, first hand, in a serious field investigation (if not a preliminary one) concerned with truth, not proving UFOs or other phenomena.

After much planning, schedule re-arranging and logistics we had our date set and selected the crew. Our experienced lead investigator Johnny Anonymous (and technical wizard extraordinaire), Crakeur (the required skeptic) and your's truly (the bar tender).

We have a real treat for everyone here in the form of a world exclusive recorded conversation with Robbie Williams where you will get a sense of the man behind the "Pop Star". What led him to find AboveTopSecret.com, why he's interested in these topics and more importantly, how smart and witty a guy he really is.

Having had the pleasure of getting to know Rob on a personal level the past several months it became clear to me that he takes a lot of unfair heat in the press. It's easy to point and giggle at people who are interested in "alternative topics", but I think you'll see in this interview there's a whole lot more to the story than "crazy ideas" or fantastic theories.

The videos here are preliminary samples of what we saw in the sky over and around Mount Adams, more will be released as Johnny goes through the hundreds of hours of video and pulls the best captures out.

While many of these objects are most likely, if not certainly satellites there are one or two that simply don't seem to behave the way a satellite should IMHO. That's the beauty of AboveTopSecret.com though, we have millions of people the world over who will look at these videos and come to their own conclusions. We hope "The Wisdom Of The Crowd" will allow us to come to some sort of consensus on what's really happening in the skies over The Gilliland Ranch. 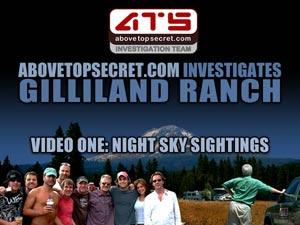 The daylight captures were all shot after Crakeur and I left the scene so Johnny will have to field the questions in those. The objects shown here appear to be unrelated to bird/bug activity, as we've also captured (and show in the video) comparative studies. In my opinion, these captures are the most interesting video we've released, although seemingly unrelated to typical "UFO" sightings. 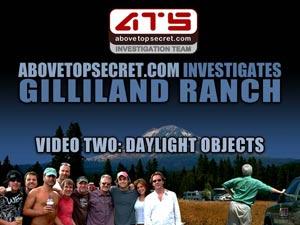 Much has been said and speculated about the apparent erratic lights seen during the evening hours on Mt. Adams. We've capture a decent collection, and also have captured hikers and campers on the face of the mountain as well. Are these lights nothing more than camping activity on the mountain, clearly transmitted in the clear-fresh air? Or, is the apparent brightness suggesting more than that. We offer these up for discussion. 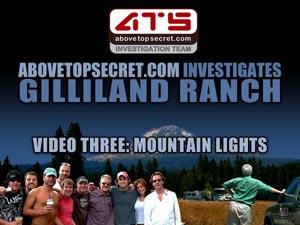 Finally, in our first collection of videos from Gilliland Ranch, Johnny recorded some on-the-scene comments while fresh in his mind. 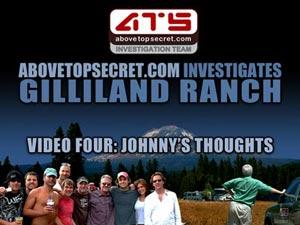 As we continue to review the videos and logs, we'll release more high-resolution streaming videos within this thread, and add the links in this opening post. Approximately 20% of the video material has been reviewed, so we may find some interesting gems as the remaining 80% is looked through.

As we complete the review of the data, we'll make pristine versions of the videos on DVD for professional researches to request. However, we've gone through a significant effort to ensure these videos are of the highest quality possible for online streaming.


UPDATE
Second round of videos

Now I'm going to get NO work done today, I'll be busy watching all of this for the next several hours! LOL

posted on Sep, 8 2008 @ 11:25 AM
link
The following is my opinion as a member participating in this discussion.
and some people say there's nothing good on ATS anymore

Great Job Guys. Appreciate the work that went into this.

posted on Sep, 8 2008 @ 11:33 AM
link
I cannot think of anything in the last two years since I have been a member here on ATS, and along the way, became part of the TEAM, that I was more proud of my buddies Springer, Crakeur and the John-a-nator. This is simply a FIRST CLASS effort and production all the way that portrays exactly what ATS was founded on.... "Deny Ignorance".

And I would be remiss if I did not mention the absolutely FIRST CLASS job that Skeptic Overlord did on the post production, graphics and players.

posted on Sep, 8 2008 @ 11:37 AM
link
HA! i knew there was a reason the background to ats was switched to the mountain view from this investigation! I'M BRILLIANT! great work guys, i'm gonna take my time with these videos.

I'm also slightly surprised that there aren't more flags or responses from all the people in johnny's thread saying "post more videos!", maybe it's because it's early in the day....luckily i've got today off starred and flagged!

Make sure you DIGG IT too!

posted on Sep, 8 2008 @ 11:42 AM
link
Very interesting---In the last segment video, JA states that he's not entirely sure that the activity might not be of a poltergeist-like nature.

Was there any ghost-like activity? Disembodied sounds / Voices? Things being moved around?

posted on Sep, 8 2008 @ 11:43 AM
link
By the way..... Johnny's Thoughts is my favorite. Knowing Johnny as well as I do and knowing that he has sought his Holy Grail for 25 years, this video where Johnny examines his own thoughts and beliefs is absolutely priceless. You see what I have known all along.... what a wonderful, caring person Johnny is and how he will always seek the truth, no matter what the cost.

Maybe someday I can have an adventure like this too.

Great effort, and much appreciated.

I'm so jealous of you guys spending time there - it sounds such an exciting place. And don't forget I will be interviewing James on my show this Friday.

posted on Sep, 8 2008 @ 12:05 PM
link
I would dismiss some of the daytime footage as bugs perhaps. The night time footage was the more interesting watch imo. The two objects were really intriguing. One seemed to start moving when the other got into a certain proximity and saw that the one was in a line to collide with it then they both started off.

So did you get any reaction from any of the objects from using your laser? It didn't appear to me that any of them reacted to it from the reports I've heard. The "powering up" and the glimmering of different colored lights and whatnot. I didn't really see that except for maybe it slowing down which I couldn't really be sure if it was or not.

The mountain footage had some pretty good spots. That moving trail of light that was down below in the woods was fascinating to be sure. Did the lighting up on the mountain side occur just at dusk? It didn't last long if it was terrestrial.

Good work on the presentation. It was very professional.

posted on Sep, 8 2008 @ 12:06 PM
link
Well that's pretty fantastic I think.
That someone who has been in the mainstream media world for so long would be interested and believe in things like this.
But one question I would have about this is.
And I think you would agree is a valid question.
Why would Robbie Williams possibly jeopardize his career by investigating things such as this?
Thanks

Originally posted by Interestinggg
But one question I would have about this is.
And I think you would agree is a valid question.
Why would Robbie Williams possibly jeopardize his career by investigating things such as this?
Thanks


I think having an interest in something would be the reason he would investigate something such as this and I hardly think he's risking his career by following his interests but I think that, after listening to him, you might have understood all of this.

posted on Sep, 8 2008 @ 12:10 PM
link
Great job guys, thoroughly enjoyed listening to the show and watching the footage you captured. This is what ATS is all about!!!

Originally posted by SimonGray
Great job guys, thoroughly enjoyed listening to the show and watching the footage you captured. This is what ATS is all about!!!