Well, after returning from the ATS Investigation at James Gilliland's ranch, because of the tremendous expense, we were forced to sell the SUV and go to cheaper transportation for future explorations in our quest to Deny Ignorance. 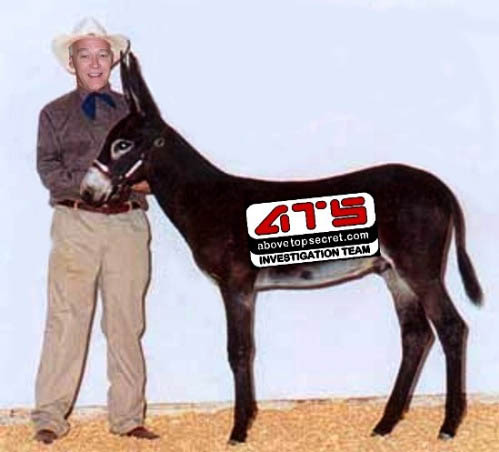 The MOD SQUAD will award Applause Points to their Favorites.

which one's the ass?

Who stuck the logo on Springer's back?!

But I'm not gonna go there

"Johnny Anonymous and his new bride Dixie were seen coming out of the posh new restaurant CHE RABBIT".

posted on Sep, 4 2008 @ 09:31 PM
link
I'm waiting for someone to accuse you of being politically biased in your choice of transportation.

ATS the ride of your life.

Mom, this is Sarah, I just know that when you get to know her, you will love her as much as I do.

UFO Found! Unfortunately for ATS... it was an Unsanitary Fourlegged Ovine...


Keeping the atmosphere cleaner, one Donkey at a time!

...held my batteries in his hand for just a few seconds and...

posted on Sep, 4 2008 @ 10:32 PM
link
In his overzealous effort to prove to the guys that he did compare in size with a mule, Johnny failed to realize that it was a female.