posted on Feb, 25 2004 @ 01:48 AM
link
I'm looking for any information about Peter's Mountain located in rural Albemarle County Virginia. I grew up in a town called Gordonsville about 10 miles north of there. As a kid I always heard stories about how it was a Nuclear Missle base, or a super communications hub. But the coolest one was the rumor that on 9/12/2001 Anti-Aircraft Artillery went up the mountain and has not come down. There is a big paved road that goes to the top off of Turkey Sag Rd. which is a gravel road and tractor trailers are always going up the mountain with covered loads. There are all sorts of Gov't signs about private property and no tresspassing. From Gordonsville at night the top of the moutain is lit up like a Christmas Tree with a lot of blue lights which I thought was weird. and you can see vehicles driving around. I'm looking for any info. I've talked to people who work for Sprint and AT&T who operate substations for the National Long Lines System at the top of the mountain that have been greeted by soliders wearing no patches but a flag and carying m-16 rifles. Any info is helpfull. Thanks

posted on Feb, 25 2004 @ 04:18 AM
link
I found a USGS photo of the county you mentioned on www.terraserver.com but the resolution is NOT good enough to see anything interesting.
Albemarle County, Virginia
If you can get the latitude/longitude maybe you can get something better there or at GlobeXplorer

That's the best I can do to help. Maybe it will be useful.

posted on Feb, 25 2004 @ 04:24 AM
link
Thanks, hopefully I can get anybody with any infromation on this, I grew up in the area and it's something that I've just always wondered about.

posted on Feb, 25 2004 @ 10:08 PM
link
I'm also in VA, I've been to Albermarle a few times, I can't remember of hearing about that particular spot you mentioned, but I've heard of a lot of weird places in the state. I'll try to find some more information.

posted on Feb, 25 2004 @ 10:12 PM
link
Thanks, this is not a widely known thing. I've been to most of the places in Virginia, Warrington Training Center, Mount Weather, Mount Pony, ect..

posted on Feb, 28 2004 @ 09:12 PM
link
Years ago, about 15 to be truthful, I drove with family past MT. Weather, on our way to Kings Dominion Park. I asked why we couldn't slow doen to look around, and was told that if we went below the posted speed limit we would be stopped. At the time I thought nothing of it. But today I realize I have family living within 15 min. of it. I don't know the "REAL" story but if anyone out there has it, Please ley me know!!!!

posted on Mar, 22 2004 @ 04:24 AM
link
Yeah, I used to work for a long distance ambulance service, after doing some research, I realized that I have driven past Mt. Pony, Warrenton Training Center, and I think Mt weather on the way to Bluemont.

members.cox.net...
Hangglider's information. I have to question the presence of a government center there if people can hangglide there.

www.hangingrocktower.org...
This mountain above us is known as Peter's Mountain, named for Peter Wright, who settled in this area in 1776. At this point it rises over 3200 feet above sea level. The state line between Virginia and West Virginia lies on top or near the ridge except where it dips into the valley to include Waiteville, West Virginia.

Peter's Mountain is known, not only locally, but throughout the world by meteorologists as the producer of one of "Natures Greatest Noises". Usually, in the spring, when conditions are right, a great roaring wind is heard, described by one as "a tremendous thundering roar of giant waves breaking over rocky reefs."

The Gap Mills is described as originating in the Atlantic Ocean and traveling unabated across Virginia until striking Peter's Mountain, when it spills over the ridge causing the roar. Local residents have observed, here in the fields below, ocean gulls and wild geese which have been carried along the mighty current of air and, being exhausted and confused after topping the mountain, have come to rest.

posted on May, 20 2004 @ 08:22 AM
link
That site is one of the original AT&T project offices built in the early 60's as a communication and relocation facility. The stories you heard about it being a "super communications" site aren't all that far from the truth. It was designed to provide redundant communications for the higher ups during a catastrophe. Also, some of the sites have relocation facilities intended for Continuity of Government operations. Check out Albert LaFrance's site at: coldwardc.homestead.com...

He is the resident expert on these sorts of things

I realize this is an old thread, but it piqued my curiosity.

Glad the thread has been resurrected.

I use to be on ATS back in 2011 until I lost my password when my computer crashed.
I was fascinated with this thread and the facility it mentioned
BaseAndEarthquake


I happened to be living briefly with a friend in the Charlottesville area during fall of 2015 and decided to track down the location of its entrance.
It really wasn't that hard using google maps I managed to figure out which road its main entrance was on I wrote down the directions to get there and took off in my car.
It was about a thirty minute drive along some mountain roads and over a tiny mountain along a dirt road.
Im telling you this place was secluded.
I noted along the road there were multiple ground markers that were indicating the location of a buried fiber optic cable.
The dirt road eventually became paved again.
As I drove along I realized I saw the entrance on my left. Further up the road I saw that there were several Estates with large grazing areas for animals. I wanted to see if I could see the facility on the mountain by driving down the road.
The base is well hidden in the tree line on top of the mountain. I think I recall seeing some antennas sticking up but they are well hidden by the tree line.
I turned around and headed back to the entrance. On the left side of the road there was a pull off next to a pasture on what I assume was public land. To my right was the entrance that went up into the woods to the mountain facility.
There was a pole with about three possibly more cameras aimed out towards the road and on the pole was a red and white sign that said no trespassing that the road was a private residential area which is a nice cover story. I would hate to be a pizza guy called out here on a prank though I doubt any pizza place would deliver to somewhere so rural.

I managed to snap some pictures from inside my car. I know the motto on ATS pics or it didn’t happen. I took these pictures around the end of summer 2015 on a old phone and I need to find which media they are stored on now…………..hopefully they are not lost because if I find them I plan on posting them.
The pictures themselves are not any more remarkable than what other people have managed to take of the entrance who have bothered to track it down.
I had no intention of exiting my vehicle with all the cameras pointed in my direction.
My heart skipped a couple of beats when a white truck came down the private road I thought it was someone coming to talk to me.
No I did not take a picture of the truck I was too freaked at that point I was worried that I might be followed back to town and several other paranoid thoughts were racing through my mind.
To my relief the truck turned as it was leaving the entrance and headed down the paved road in the opposite direction of the way that would take me home.
Seeing the truck was definite proof that this place was still active.
I figured I had pressed my luck and decided to get out of there. I managed to show the pictures to my friend and went back to check it out at nighttime the conditions were not good for taking pictures on phones and nothing that remarkable happened except the thrill of a night time drive to a weird place.

I can say this about the entrance if someone was not intentionally looking for this place and was passing by they would not give it a second thought. They would probably just assume it was just some private Neighborhood that wanted to be left alone. I guess this would be an example of hidden in plain sight.

Im sure there are many other things hidden around those mountains given how close to DC it is. I know there are military bases in the area and every day I would drive pass a Northrop building on my way to work. So the area seems pretty steeped in this sort of stuff.

There was one more place I discovered on google maps that looked fishy I could actually see it on top of one of the mountains looking towards downtown. My friend and I tried to make an expedition to find out what it was but there were to many sketchy private roads that stood in the way of our destination.
One more adventure we made was to Swannanoa Palace at night but that is for another thread.

Security gate near the top 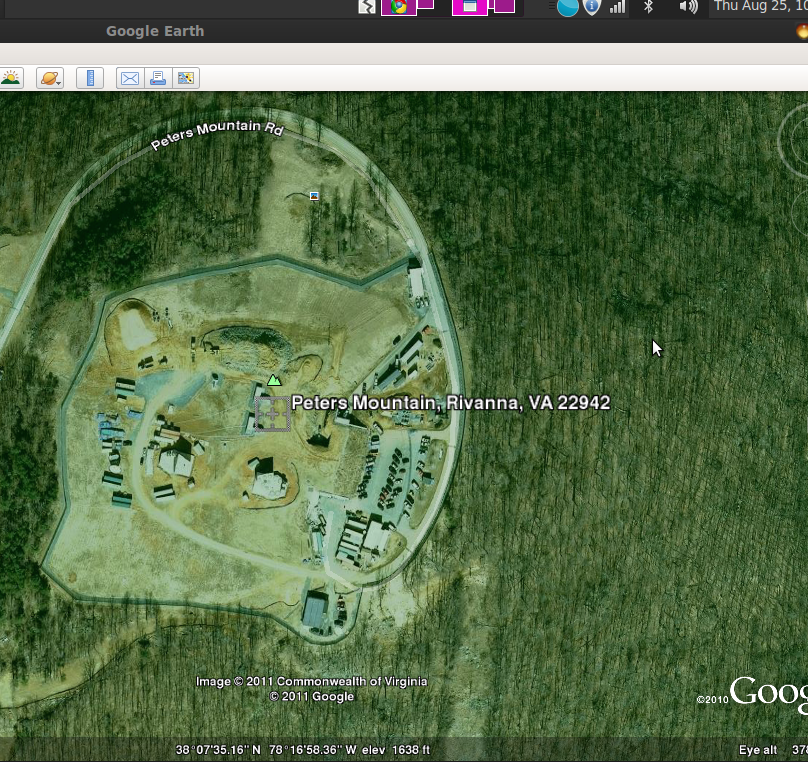 This is what google gives as the present picture of the facility.
It appears as if there is a possible door that could lead into some sort of bunker.
I am guessing the AT&T logo could be a helipad if need be not sure. 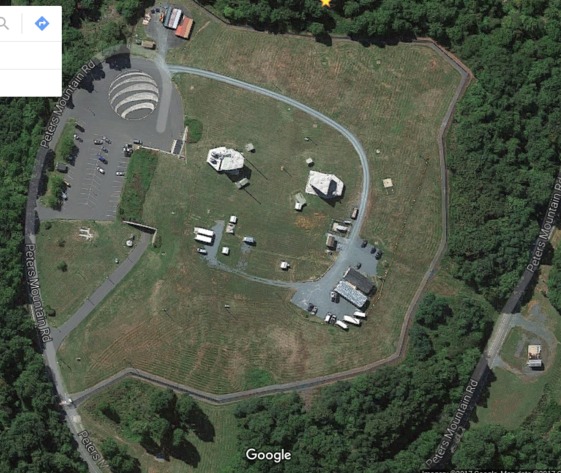 and if any body wants to take a peak on earth or maps these are the coordinates.


Security gate near the top


If you take a close look at the road on maps or earth there appears to be multiple possible security points before someone gets close to the facility.
Anybody foolish enough to turn into here could be stopped well before they got close to the main facility.
Also how high do you think the fence is?
edit on 1-2-2017 by SolAquarius because: (no reason given)

Along the road there are several estates.
I was curious as to who really owned them.
There was an article I read when I was researching about a year ago on the fishy documents as to who owned the land around there and why AT&T did not pay any taxes on it.

My friend suggested we try to Go up the mountain at the power lines.
I hope he was joking because I told him he was insane and I didn't want to end up dead or worse.
His common sense can be real off some times.

I believe It has been there since at least the 50's and was part of some cold war communication network. There are similar facility's too it across the country except they are abandoned.

Instead of being mothballed as some cold war relic this one has seemed to have found some sort of second life given its activity and what appeared to be construction back in 2011.