posted on Feb, 20 2007 @ 04:41 AM
link
I stumbled onto this video that shows a tour of the inside of Rosslyn Chapel. It is astounding what kind of stone carving those people were capable of. You can also look around on these 360 views. 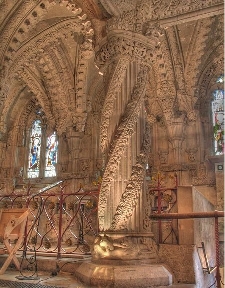 They may not have been involved with ruling the world, but it seems that they were very involved in exploring it.

Some of those carvings depict ears of New World corn (maize), which is odd because the chapel was built long before there was any supposed New World exploration.

The whole story of the Sinclair family who built Rosslyn Chapel, their connection to the remnants of the Knights Templar and their possible early voyages to Nova Scotia and even parts of what are now the US is very interesting.

I just read William Mann's "The Knight's Templar in the New World" after hearing an interview with him on C2C, and it was an interesting read.

posted on Feb, 20 2007 @ 05:11 AM
link
The discovery of the depictions of maize on Rosslyn Chapel IMO is proof of the hidden knowledge of the early freemasons, or of a re-writing of common historical knowlege relating to the discovery of the new world. Either way it shows that secret societies in the past have supressed important knowledge for and agenda that is hidden to us all.