posted on Oct, 9 2006 @ 08:03 PM
link
Can anyone identify this aircraft. this picture is taken from a 1995 lecture by a man called Phil Schneider who claimed to have worked on the deep underground military base at Dulce New Mexico.

Apparently the aircraft was secretly used in Iraq in the Gulf war and it is a stealth aircraft, and the pilot was able to control the aircraft with his mind anyone got any more info?? 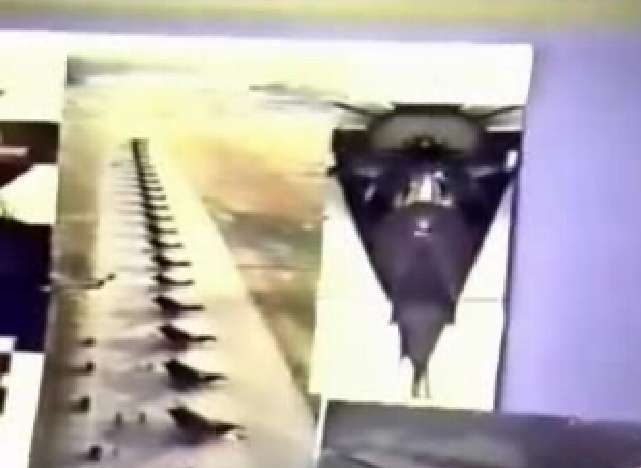 here is the link to the video lecture

Just remember, there are several revised and upgraded versions of the F-117 on the line right now. The original F-117 stealth aircraft was designed on paper with a slide rule, and that is why it looks like a crystal on the outside. If you look at the B-2, it is quite a bit smoother, and that is because a 'puter was used to design the radar-reflective surfaces rather than a Human brain. The major problem with the F-117's initial design and produced models is that the airframe is inately unstable. The flat and angular surfaces of the original design create more than a little aerodynamic drag, lending to the overall instability of the airframe. The original was/is "fly by wire" as a result, meaning that stability id enhanced--even had at all--through computers which constantly moniter and correct flight surfaces.

Though I can't state it for a fact regards the F-117-x, I can assure you the brain-wave interpretation for flight control is being worked on, and it stands to reason that the F-117 is as likely a candidate for experiments with that as any other aircraft considering that it's control is already computer enhanced.

posted on Oct, 9 2006 @ 08:53 PM
link
At first I thought the lined up planes were facing to the right, however now I see they are F-117s facing to the left and away from the camera position. However, the plane on the right where similar in places, most notably around the cockpit, doesn't look exactly like an F-117. Perhaps it's a black project, perhaps it's just a photo that has been manipulated.

The picture on the left was taken in August 1990 as the 415th Tactical Fighter Squadron passed through Langley Air Force Base, Virginia, on its way to Saudi Arabia. A clear vesion of this photo can be found on page 97 of "F-117 Nighthawk" (hardcover edition) by Paul and Alison Crickmore.

The photo on the right shows two F-117A aircraft, one behind the other, inside a hardened shelter at King Khalid Air Base, Saudi Arabia. They are somewhat disorted through the photographer's use of a wide-angle lens. Clear copies of this photo can be found on page 54 of "America's Stealth Fighters and Bombers" by James C. Goodall and page 79 of "Team Stealth F-117" by Robert Shelton Jr.

posted on Oct, 10 2006 @ 03:06 AM
link
thanks for that Shadowhawk, he did not mention the name of the plane in the lecture so I thought it might be something I had not heard of.

any thoughts on Phil's other claims about underground bases etc??

posted on Oct, 10 2006 @ 12:08 PM
link
While the lined up aircraft on the left could be anything due to the oblique angle of the photo look at the thing on the right. It can't fly cause it ain't got no wings! The delta isn't large enough to produce any type of flight characteristics beyond those of a re-entry lifting body configuration. Look at the F-117 and see the relative size of lifting surface the wings and body produce. Look at old pics of deltas like the F4D, F-102, F-106, Vulcan and you'll see the aspect ratio is all wrong for the thing on the right.

posted on Oct, 10 2006 @ 12:25 PM
link
That could be something to do with the photographic process, type of lens, etc, or maybe even just that the proportions of the picture have been altered after the photo was taken.

The proportions of the F-117 in the above pic look different to the one in my earlier post.

Did you even read my post above? The mystery has been solved. We found the original photos. They are both F-117A pictures. The hangar shot was taken with a wide angle lens. End of story.

Did you even read my post above? The mystery has been solved. We found the original photos. They are both F-117A pictures. The hangar shot was taken with a wide angle lens. End of story.

Excuse me for daring to think differently. Why don't you post the original shot of the picture on the right? Until I see it for myself, excuse me if I decide against taking your word.

posted on Oct, 10 2006 @ 01:53 PM
link
I listed two published references for the hangar photo. It may be somewhere on the Internet as well. If I find it, I will post that reference as well, but it is not my highest priority right now.

Originally posted by Shadowhawk
Here its is. It took all of 5 minutes research on the Internet.

Certainly looks similar to the picture in question, well done. If it only took 5 minutes to find, why didn't you just do that in the first place?