posted on May, 28 2006 @ 01:40 AM
link
I do not normally participate in the NWO forum, given that I am an ardent skeptic who has yet to see any tangible evidence that the NWO exists as a real organisation. With that in mind, I would like to ask those whose knowledge in this matter exceeds mine what their take on these photos is. They are more of a curiosity than anything, really, but I found them a little odd. To explain:

I recently took a holiday in a small city here on the east coast of Australia. Whilst driving through a small town on the way to my destination, I noticed the following sign outside the town's Seventh Day Adventist church: 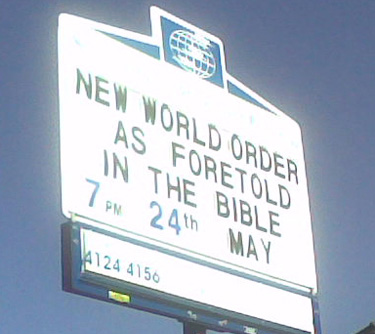 I took the photo thinking that my fellow ATSers might get a kick out of it. I quickly put the matter out of my mind and set about the serious task of enjoying my holiday. Then, when I was leaving the town in which I was holidaying, I passed another Seventh Day Adventist church with the following sign outside: 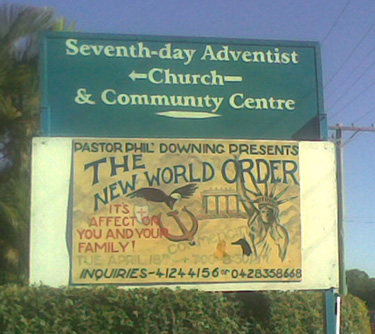 Now this I counted somewhat odd - that two churches would make the NWO a topic for their Sunday sermons. Looking closer, however, I observed that both signs bore the same phone number. And, of course, it did not escape my notice that both churches were Seventh Day Adventist. This, then, brings me to the crux of the issue: is speculation regarding the NWO and the consequences of their rise to power a common theme amongst Seventh Day Adventist teachings? Or, more likely, are these signs simply the trappings of a lone preacher or (even more likely) a travelling preacher who seeks to stir up the faithful by espousing the evils of the NWO?

I myself held this last possibility to be the strongest, until I observed that, whilst the second sign (bearing the Statue of Liberty and the bald eagle of the United States) was faded and worn, the first sign was of the kind which is regularly updated for weekly sermons. This I again counted a mystery, one which served to, in part at least, defeat my recently formed hypothesis.

So it is that I seek the assembled wisdom of my fellow ATSers. What are your opinions of these signs? I must admit, in my ignorance, to having little knowledge of the tenants or common beliefs of the Seventh Day Adventist church. Is this an oft-discussed issue? I also have no desire to turn this thread into a rant on the validity of the beliefs of the Seventh Day Adventist church which, as far as I am concerned, are as valid as any others.

So, what do you think? Can you help satisfy my curiosity in regards to this issue? At the very least, I found the signs quite amusing and thought that the dwellers of the NWO forum might find them such.

posted on May, 28 2006 @ 01:50 AM
link
I wish I could be of more assistance - but everything I've ever heard up until this point regarding Churches and the NWO was some propaganda leaflets in high school encouraging the boycott of several companies and their products based on percieved subliminals and occultic messages in their artwork.

(As an artist myself, I know that sometimes things just "slip through" into drawings that you don't realize until someone else points them out to you.)

It's a shame you couldn't stick around to attend the service. I'd jump at the opportunity to hear a sermon on the subject.

A pastor recently came out in the US saying that FEMA has a plan in place to use all churches to convince the masses to accept the NWO and martial law.

posted on May, 28 2006 @ 01:12 PM
link
Better to help the masses accpet the transistion rather than unexpectedly thrust it upon them, don't you think?

I still think that it's a hot topic right now - and everyone has manifested excessive paranoia about the whole thing - everyone fearing for the worst possible manifestation of some sort of totalitarian regime. Rather silly.

Perhaps 1984 shouldn't have been mandatory reading in high school. So many people seem to forsee this as the future plan without taking into consideration the fact that it's an extremeist work of dystopian literature.

In other words - 1984 itself became Goldsteins Manifesto to the masses.